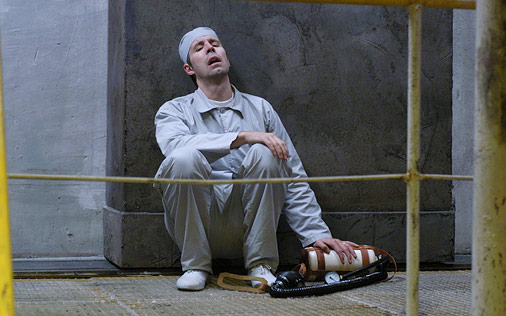 From the wallet of George Clooney comes Pu-239: one of the most gently boggling independent films you’re likely to miss this year. Grossly under-promoted in the wake of the Litvinenko poisoning, it was first made available to us non-HBO subscribers earlier this year on DVD, and even then limited to a sole Region 1 release. Technically, as the film originally premiered at the 2006 Toronto Film Festival, this review’s a bit of a late one, but such was the impact of the story and score that I was amazed it all hasn’t received more coverage. Especially when all I can see outside my local flea-pit are posters for the latest Simon Pegg matinee.

Using the well-paced picture to make his debut for English-language cinema is composer Abel Korzeniowski, whose music, like its on-screen source material, is little short of shit-hot.Recorded and mixed at the Warner Brothers’ Scoring Stage by Steve Kempster and Joel Iwataki, the sonic nuances and scientific insight that drip from the screen are unlike any I’ve seen from Hollywood. And while the film’s premise of loose nukes isn’t exactly a new one, writer/director Scott Z. Burns delivers his own vision on a slow science-factual basis: Paddy Considine plays Timofey, a kind-hearted power plant flunky whose heroism forces him back into a malfunctioning reactor room, sealing his fate with an invisible noose. Unsurprisingly, his bosses use him as a fall guy for the incident, sign him off with a clean bill of health, and tell him they won’t be in touch. The whole thing stinks like a tropical pet store and as Timofey secretly tests himself for possible radioactive infection, he finds his medical was rigged and he now has a matter of hours to live. His next course of action matches that of any stiffed worker—stealing stock with a mind to profit—but in this case, the stock is the man-made isotope of the title and the profit is purely to put food in the mouths of his cash-strapped family.

If anyone can play a man on the edge it’s Considine (tap up Dead Man’s Shoes on YouTube to see how petrifying he can become), and composer Korzeniowski supplies the character with cues worthy of the film’s stirring narrative. “Opening” begins like something from a savings commercial, the Soviet strings and Geiger counters quickly promising us characters and agony, and “Field” fleshes out the film’s recurring imagery of blue periwinkles with bobbing synths and plaintive violins. But it’s when the protagonist crosses paths with affable hood Shiv that things pick up on both screen and headphone. Shiv’s another Rusky father with a gun to his head, though this time prepared to fuck anyone over to remove it. After all, this is 1995 and Moscow’s embracing the delights of consumerism like a nerd in a pussy full of coke. Balls to the innocent diligent who can’t get with the rhythm: shopkeepers, dead dogs, and children of questionable parentage. This is party hard and party now.

Like Timofey, Shiv’s battling with turbulent elements, but the difference here is the absence of his counterpart’s integrity in the face of widespread rot. His goonish mischief is matched by Korzeniowski’s cheeky instrumentals; we’re shown the old side of New Russia that the gangsters would have you is gone. “Mobsters” is typical communist slapstick, all polka accordions and Tetris dancing, perfectly representing the brainless ineptitude of the film’s doltishly-dense bad guys. Shiv’s discovery of Timofey and his tube of the universe’s most toxic material is—to him—the ultimate hustle, and he’s going to use it as a passport to greener grass, even if it costs him his crew. “Dog Crash,” then, makes clever use of braying trad folk to sum up the rising frustration of the character in the face of an increasingly mean reality: his girlfriend’s being plucked by a tennis-crazy crimelord and he owes six large to the Versace-suited Tusk, a gangster who kills bankers with ivory. The only man fate will pair him with is the ever-disintegrating Timofey, who on the brink of annihilation is polite even to the dregs of the underworld, despite things becoming ever blacker. The pads and glyphs of “Fireworks” soften the obligatory cold night with photons and “Harness”‘s stern fiddles inject Considine’s character with resolve as his body decays in the face of poison with a 24,110 year half-life. If you don’t want to spoil the inevitable end to the story then skip tracks fifteen and sixteen, but “Ending”, which airs over the movie’s breathtaking denouement, has the necessary warmth and feedback picks to preserve the fates of those fortunate to survive. All that pain at last dissolves into angelic shoegaze, sweet to the point it’d make Sofia Coppola swivel with jealousy. The perfect close to a film as beautiful and ugly as the behaviour of all its disturbed particles.

For a movie whose punchline deserves to rank alongside the most blackly slapstick in cinema, Pu-239 will never reach a wide enough audience to garner what it deserves, a reason why, here, the plot is so ecstatically mapped out. It’s a testament, then, to the efforts of the cast and crew that the film’s in any kind of circulation at all, and even more so to Abel Korzeniowski himself (who’s kindly uploaded the OST for all you lucky CMG readers to indulge in). Like it’s accompanying imagery I can’t recommend it highly enough, and urge anyone who’s remotely curious to investigate. Warning: it spreads.

:: Listen to the Pu-239 OST for free until the end of November