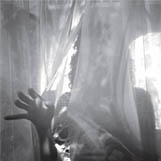 When I listened to Crush for the first time all I could hear was the Cure. I’m sure that someone better-versed in darkwave than me can name a more appropriate late-‘70s/early-‘80s goth band as a point of reference, but I was bowled over by the presence of Robert Smith on this album. I mean, damn. The vocals on “Sequins,” the opening track, sound so much like Smith that you can almost smell the eyeliner. And the hairspray. And the shame. See, I loved Abe Vigoda’s last album Skeleton (2008), and I don’t even like that album’s obvious influences, but with Crush? I was a little disappointed. Whither the “tropical punk,” Abe Vigoda?

But then I listened to it again. And then I listened to Skeleton and then Crush all in one sitting, and goddamn it if they didn’t just make sense together. It seems like a logical progression; a lot of the same stuff is there—the orchestrated chaos and the noise, even the synths—but it has been refined into a whole new (old) sound. And there are even a few departures from the darkwave soundscape: my favorite song is “Crush,” which would not sound out of place on a Dinosaur Jr album. Specifically, that one with “In a Jar” on it. Which, funnily enough, closes with a cover of the Cure’s “Just Like Heaven.” So maybe not such a departure, after all.

All of that said, there are a definitely a couple of songs on this album that I absolutely cannot get behind. “We Have to Mask” is painfully overwrought, and “Repeating Angel” belongs on a John Hughes movie soundtrack or something. Maybe a parody of a John Hughes movie. Like, it is made for Molly Ringwald to listen to in her room as she pines over her delightfully mismatched love interest, but it’s also six minutes long, which is far too many minutes for movie pining. Or punk, since my rule of thumb is that you can no longer call yourself a punk band if your songs are over four minutes long.

Maybe that’s my problem with this record in general: it’s too clean and pop-y and melodic, and while Skeleton was sometimes those last two, it was also warm and crazy and fun. Crush is cold and hard and calculated. I mean, it’s clear it’s supposed to sound like that, but I have a hard time getting into it. Especially since the album is so maudlin. Like, it’s supposed to be miserable and depressing, but those sentiments don’t feel genuine. Calculated angst: is there a more annoying emotion?

If you take Crush as a sort of reaction to the State of Music Today, though, maybe it is super punk. Maybe Abe Vigoda was all “fuck adding distortion to music recorded on super nice equipment. Fuck the beach. Fuck sounding shitty on purpose. Fuck feel-good. You want nostalgia, we’ll give you nostalgia.” Or maybe they just really like the Cure. And objectively, I guess, it’s a good album. It’s a cohesive unit. All the songs work really nicely together. It’s sonically interesting; there are some cool noisy layering things happening. And “Pure Violence” and “Crush” are truly great songs, combining a “punkier” aesthetic with that pervasive synth-y goth motif. I sort of wish I liked the album better; I probably should. But I crafted my whole middle school identity around listening to Leftover Crack instead of the Cure (man, I hated the goth kids). To me, this album needs more of the former and way less of the latter.