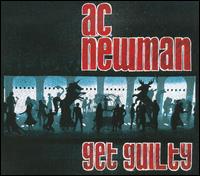 I’ll admit there’s little spark or pomp to the term “workmanlike consistency,” especially as it’s applied to music, but I still think it’s more impressive, and important, than inspired-but-fleeting inspiration and flash-in-the-pan relevance. Writing and releasing music on a regular basis, and managing to do so without resorting to half-obscured ideas (Animal Collective) or gimmicky appropriated identities and pedantic vocabulary (Of Montreal), is one sure way to impose a discographic arc, complete with a progression of thought, development of themes, and aesthetics. You know, the kind of things prose and poetry often have, with less lines than “Thunderbolts,” even.

A.C. Newman seems uninterested in these things, which is either fortunate or unfortunate given the degree to which you find yourself enamored with his entirely serviceable but predictable output. Get Guilty, his second solo album, is recorded and performed with almost entirely the same commitment to the orderly confines of the three minute pop song as Slow Wonder (2004) and any New Pornographers songs without Neko Case’s ethereal perfection or Dan Bejar’s slobbery self-indulgence. The issue here isn’t necessarily that the music is bad, or that if presented in a historical vacuum it would still be so terribly uninteresting. The issue is that Get Guilty is self-legitimizing in the same way as anything else Newman has done: an exacting, microscopic, suffocating dependence on songwriting that insists on order and certainty.

And: what historical vacuum? We’ve already had years and years of Matthew Sweet and Fountains of Wayne and Teenage Fanclub and Apples in Stereo and the Shins and, hell, the Raspberries and the Kinks and Big Star and the Replacements. Get Guilty is as immediately enjoyable, and ultimately as completely unsatisfying, as these other dinners of snack cakes and sugar water. It feels formulaic and mass produced, even if it is on Matador—a home shared by Cat Power, she of diamond and luxury car commercials.

What the hell happened to our indie, anyway? Is total and complete subjection to the commercial really the only direction in which pop can be taken? Is it really just a matter of applying a method to a four piece band and sprinkling the odd trumpet, keys, or harmony to mix things up? Was “Falling Through Your Clothes” from Twin Cinema (2005) just dumb kismet? Are we doomed to sate ourselves, album after album, with the musical equivalent of New Coke?

We can also see the relative failure of New Pornographers’ Challengers (2007) as prophetic. Even with their glut of talent (Bejar not included), the band is sputtering for ideas. Their transparent dependency on somehow happening upon a memorable melody was revealed after two records, and one that somehow transcended Newman’s insistence upon a hemmed scope. Perhaps it was by virtue of their unconventional lineup, or the band’s relegation to side-project status. Regardless, it’s frustrating that Newman only need look to what Case is doing within the confines of even older genres—like country, bluegrass, blues, and folk—to see just how far her lyrical train can take him.

Instead, we get an album that would be boring even if it wasn’t also boring by Newman’s precise but banal standards. It’s not that I have it out for the likeable Everyman, who stands under a spotlight’s harsh glare with guitar in hand, ready to offer up another mic-stand confessional. It’s just that we already live in a world with This Year’s Model (1978), and even Costello departed those pastures for the world beyond the fence a long time ago.