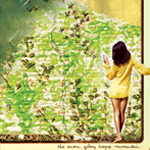 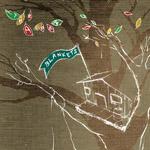 The Acorn and I are from the same city, so I admit that there’s something about the band’s small-town escapism, with an attitude of “the blanket of this city / will never keep you warm,” that strikes me as about as constructive as criticizing your crowd for not dancing. But, I’ve always been defensive in my love for Ottawa, and, unless you’ve been personally scolded by the boys for not dreaming big enough, you’ll probably spend the twenty odd minutes of the Blankets! EP standing on a street corner with your iPod, lost in attentiveness as the walk / don’t walk signal changes back and forth.

The band would fit nicely on Saddle Creek’s roster because, whether they actually spurn or embrace it, they’re a band with their hometown written all over them. Sitting about halfway between Toronto and Montreal, Ottawa lends itself to self-deprecating, forlorn, “can’t wait until I can move to The City” teenagers, with all the melodrama, reveries and crying fits that implies. Which might sound annoyingly insular and self-involved, but to criticize the band for dishing out that particular brand of sentimentality (their website, for example, is called doyounotyearn.com) would be missing the point. The annals of the gush-out album are painted in layers of introspection, so it’s their measure of perspective – the band’s ability to stay on the right side of the line between inspiring and embarrassing – that best articulates how listenable and ultimately likable this music comes across. In other words, if Bright Eyes is the high school bush-bash and the peach schnapps, The Acorn is the day after, when thinking about what you did the night before breeds “what-does-it-all-mean” revelation.

The EP is a hint that this band is on the cusp of something meaningful, even if self-imposed meaningfulness is something endemic to their style. The Pink Ghosts, the Acorn’s debut LP, was more like singer-songwriter Rolf Klausner’s debut LP, consisting predominantly of solo acoustic recordings, short guest appearances from friends, lush vocal overdubs, and ambient guitar lines recorded on a laptop in Rolf’s bedroom. Blankets!, by contrast, benefits from the contributions of a fully formed band, deepening and complicating the songs into the peaks and crags of a distinctive (though still developing) sound. Drummer Jeffrey Malecki creates a literal noise in the kitchen on “Plates & Saucers,” and Howie Tsui and Klausner’s guitars hold hands throughout, intertwining organic tones with electric ones; the 4/4 strum of “Blankets” oscillates between the stereo channels like a blunt instrument. The band also seems less afraid to say what it wants to say, making statements like “I know your heart’s seen better days” sound somehow more than nonsensical cliché. Now that a cohesive band dynamic is in place, the Acorn has its earnestness working for them. In Ottawa the title track alone has found a regular place on mix tapes, little heart-shaped quotation marks around its title.

Blankets! may only be four songs, but there’s easily enough music here for an album’s worth of ideas and, fundamentally, each song is pop gold. Whether viewed as a stop-gap or a first step, this EP may help to explain why The Acorn is gradually being recognized as Ottawa’s leading musical export (sorry, Furnaceface) and are regularly featured and reviewed in Canada’s nationwide Exclaim! magazine. Unlike the Midwestern singer who heads for New York with guitar slung over shoulder (or whatever), so long as The Acorn keep hating them suburbs and backhandedly congratulating their fans for showing up to their shows on a Wednesday night, it seems that there will be a large and growing number of people – especially in Ottawa – who will continue to buy into the idea that there’s always something bigger, and keep listening.