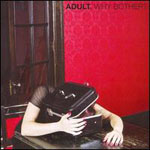 “Good Deeds” boils like Ari Up rolling with Suicide; “I Feel Worse when I’m with You” is juvenile Michael Patton sensibilities drowned in Horse Rotorvator ambience and X-Ray Spex broo-ha-ha; “Inclined to Vomit” is Mad Magazine humor molting off the skin of “Iko Iko” and regenerating in the skin of Henry Rollins. And since the album starts with “Red Herring,” let’s mention what the obvious one is: people are still talking about this band like genre matters. Sure, Nicola Kuperas and Adam Lee Miller pretend like they care about “dance” music and whatever Detroit influences might rest upon their agitated shoulders, but Why Bother? isn’t carefully mapping the way they layer the beats. I mention this because wags will tell you ADULT. is weird or something; Mu is weird, and this is just a straightforward dance/punk band willing to take risks.

Those risks are the biggest attraction and biggest weakness here, I think. Where the band works, ADULT. is able to maintain a punk drive and attitude that literally pulls their songs across their clever-yet-snarky programming. Where it doesn’t, ADULT. sound like an unanimated mess. Take “R.S.x.” for example, where the basic idea—queasy synths spewing over bouncy, sci-fi keys—is solid, yet Kuperas tries to moan like Pere Ubu’s David Thomas while the song itself lacks the momentum that makes up for Thomas’s caterwauling, so Kuperas ends up sounding tired. Which is a shame, because while the lyrics often alternate between unintelligible and kind of embarrassing, Why Bother? seems to be about bothering, and the simple concept of making noise in opposition—noisy things are the most shocking; the most from the gut—fuels the album.

Which is why a track like “Good Deeds” works really, really well. Amidst a pile of grinding noises, resonators, and fake claps, Kuperas marches her voice, clipping the melody into syllable-long phrases. The extended instrumental intro allows the pieces of the song to fall into place; the rhythm gets momentum first, so when Kuperas enters she gets carried along. Similarly, “I Feel Worse when I’m with You,” though more straight forward, finds Kuperas sneering through a dissection of claustrophobic relationships. The kick is canned, the snares sound creaky, and the bass/organ combo is just this side of bad fifties horror soundtracks. But the net result of the mess is a funk that channels the simplistic (but not simple) beauty of E.S.G. “You Don’t Worry Enough” pulls the same trick, this time coating a simple guitar line in fuzz and getting a siren-like synth line gussied up for the hook.

“Red Herring” is its own distraction; a wash of industrial glibness, Kuperas sings soft and sweet over clanging piano chords, wooshing effects, and tinkly percussion. She implores us to “drag a red herring ‘cross the trail”; I dare you to find the actual path in this ambience. Same thing with both parts of “The Importance of Being Folk,” where Kuperas croons “it’s passed on and on” over woozy accordions and random noise. Certainly the band seems to suggest their songs have lineage, but here everything is folk music in the traditional sense of “folk”; if the album is about confronting suffocating restraints, the band suggests we do that with the (folk) music of the people. Which is why “Inclined to Vomit” has Kuperas yelling random things like “utterly disgusting” and “so repulsive”; for ADULT. the point isn’t what is being said so much as the anger in its delivery. And so we find things like horror movie soundtracks and sci-fi interludes and pompous horn fanfares and what sounds like a super-processed slide guitar on “Harvest” all victim to the same industrial/electro/whatever (basically, loud) treatment. ADULT. is remixing all of our folkisms into bright spindly packages of wound-up punk music through the focal lens of dance.

That it doesn’t always work may not be surprising for fans of the band; this is the third studio album they’ve released and the third album that fails to sustain the brilliance of their best work across the entire canvas. The latter half of the album—barring “Plagued by Fear”—is another victim of the band’s curious tendency to take one risk too many. Songs like “I Should Care” and “Cultivate” are missing the spunk that drives “Good Deeds” and “I Feel Worse when I’m with You.” “Harvest” is sort of interesting but outside of it’s placement—the ambient closer—it’s not that exciting. Point being, ADULT. are an awesome band that have yet to make an awesome album. This one, however, is still pretty damn good.