1. Logotone I
2. Now Ends The Beginning
3. Here! In the Wychwoods
4. The Patchwork Explains
5. Everyday Hazards
6. Ceridwen
7. As The Crow Flies
8. Innocence Elsewhere
9. Logotone II – The New Traffic Signs
10. Modern Through Movement
11. Learning Owl Reappears
12. Further Starry Wisdom
13. We Cleanse This Space
14. Beyond The Wychelm
15. Logotone III – Eyes Inside You
16. Route Along 18 Corners
17. Wheel of the Year
18. Unforgotten Path
19. Lonely Signalman 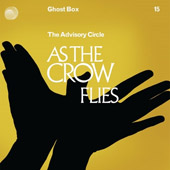 As the Crow Flies

English label Ghost Box rarely fail to deliver, but with this third release from Jon Brooks’ the Advisory Circle, they’ve hit the target with William Tell accuracy. It’s an endearing thing, watching a label you admire inch closer and closer to a perfect example of its own vision: every Ghost Box record to date is modeled around a queasy English village, something amiss but you can’t quite put your finger on it, like the first half of Village of the Damned. As the Crow Flies sees Jon Brooks swallow a little criticism and at last becoming accessible, making the kind of beautiful library pop music that fills the school VHS tapes of your dreams.

On the surface, he still sounds like a group of academics hijacking Mike Oldfield’s studio, but there’s a ferocious organization and tweaking gone on here that’s brought his Saxon electronica to life. The melodies are chunkier, there’s less experiments with screaming, and he’s even recruited Professor Ronald Hutton from the History Department of Bristol University, on standby to augment the recordings with his detailed knowledge of feudalism (and decades of cameos on BBC Schools programmes). It’s a clever twist, getting a bona fide professor to monitor your work and advise you. It’s a good job they’re all having their pensions slashed, or otherwise they’d be too busy teaching to do it.

Fundamentally, the formula on As the Crow Flies remains unchanged by both label and artist: it alludes to the fictional town of Belbury (read: Surrey), a place of owls, hostility, petrol lawnmowers and witchcraft. The difference is that this time Belbury’s discovered pop music, and it arrives in the form of a shipment of ’80s synthesizers that Brooks commands like an organist. He’s still oozing mischief, and still allowed odd moments of silliness like the “Logotone” tracks—nonsense PSAs that pepper his output, a mix of acid and corrupt information—but this time, these make way for a musical maturity, and a wider, more tempered palette of instruments. Make no mistake, this isn’t the “turns orchestral” album: tracks like “Wheel of the Year” are made of crisp strings, electric horns, and poppy New Order technology. This is still electronica for your garden, and it still produces nostalgic pearls like the sparkling “Everyday Hazards,” whose zappy drums and Cold War computer montage will have you racking your brain for TV themes. It doesn’t which particular decade you left school in—everyone remembers soundtracks this old.

So for at least nine tracks, the new AC formula is spotless. On side B, however, Brooks relaxes into old habits, reverting back to acid trip vignettes. Nothing wrong with this: it still exudes that well-preserved Quatermass atmosphere, and it couldn’t feel any more English if it arrived complaining of rain and train delays. It’s just that, for those hoping for nineteen consistently noddable tracks, part two’s going to feel like a tangent. But what a tangent: check the dark clarinet of the title track, its reverberating keyboards and seductive drum jabs (Brooks is Johnny Trunk’s mastering engineer); skits like “Ceridwen,” and its gentle, bedtime guitar; the psychedelic dueling of “Route Along 18 Corners.”

Whatever your feelings on the swing in direction, As the Crow Flies is without doubt Jon Brooks’ strongest set yet, likely to win the label more attention than its celebrity fans have already (even the famous felt uncomfortable in chemistry). The Advisory Circle archetypes have been carefully blended into some coordinated, irresistible beatwork, and as you come across Brooks’ more free-spirited antics, they don’t feel quite so jarring. Even when he allows himself right off the leash and indulges his fixation with owls, he remains level headed: “Learning Owl Reappears” uses a lecturer to explain crucial differences in bird call, emitting a few himself while bathed in mysterious, whooshing pop. The synths stabs are more bad-ass than The Terminator, and recall the era when Margaret Thatcher was king. But that’s the magic of the Advisory Circle: he doesn’t just play to everyone who grew up in the Reagan years, he plays to everyone everywhere who grew up confused (and then stayed confused).

Endpiece “Lonely Signalman” clarifies Jon Brooks’ intentions: while obviously a reference to the old televised spook story (and not much on Ghost Box isn’t), it also unveils the album’s first lyrics, serenading Old Sam the signalman with digital folk music. “Mind how you go,” he says before vanishing, referencing the title of the Advisory Circle’s debut. It’s a clever twist, one which completes the balance, and assures us at last we’ve got information videos with attitude.