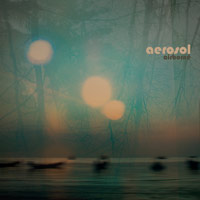 Meet Rasmus Rasmussen. He may sound like a hotshot from the Norwegian Hall of Explorers but he charts a familiar continent, wasting no time in making maps of his second trip to ElectricShoegazeIDMland (a postcard favourite for all fans of landscapes). As Aerosol (I mean, he must be a serious fan of landscapes—he’s named himself after their biggest pollutant) the Dane’s only at sophomore level, but sheesh, what a sophomore he’s onto with Airborne. His sequel to his All that is Solid Melts in to the Air (2006) debut is kind of what Spring means to Winter; or what good pudding means to undercooked mains. The minimal breaks of that first LP—cold and clipped to stick out from the pomp popular three years ago—have now grown wings, blossomed, and been flushed with atmospheric textures to lift you out of the niggles of today. Naturally there was only one place for a sound like this to go: n5MD, the soup kitchen of sonic nourishment. And just as you need to circular-breathe and soak your feet before feasting on their back-catalogue, so too must you prepare to experience weightlessness before lying down with Airborne and headphones. Rasmussen’s background in Limp, the occasional post-rock trio over at Morr Music, here shines through in the build-ups alone, pushing you to the point that when the crescendo does hit you’re already in a stoned out-of-body experience. Never underestimate those Danes, never for one single second. It’s not just the bacon they excel at.

At three-quarters of an hour, Airborne is suspiciously concise for an instrumental multi-machine crossover, alluding to gemstone idols being hacked from hours of limestone filler. Future EPs will no doubt have b-sides for life as Aerosol has been tough when culling, leaving only the warmest, the most dazzling, and the most sensual to compete for his setlist. Luckily, though, he adds just the right level of fascination to his syrup to keep me from defecting to techno (my speedboat) and demonstrates that there’s no need for melodrama when picturing infinity (or at least when trying to paint it with synthesizers).

Having said that, “Infinite Expanse” bears some never-ending qualities of its own, seemingly describing a long homeward flight with its drowsy riff and computer chords. Fans of Selected Ambient Works 85-92 (1992) will come alive by this point, already imagining future road movies with street signs in foreign languages, none of them funny enough for Flickr. The track’s lean runtime shows how Rasmussen prefers to drift rather than linger, and sure enough after three-and-a-bit minutes all’s aglow with “Psychedelic Coffee Buzz,” a breezy little Sigur Rós-ism that could stop even a two-year-old from mewling. How it’s got its title I’ll never know—it’s anti-caffeine, a bucketful of happy distortion that sinks like an holiday sunset, slowly, softly, and misty with romance. The last thing on your mind should be Folgers.

So coffee-drinkers of the world, take note: if you’re looking for a platform to help spice your addiction, Airborne most definitely isn’t it. Try self-defence or promotion instead. It’ll do what it states, which is elevate, but only if you promise you won’t begin preaching or wondering what it feels like to crash. In other words, if you want a bit of liveliness, you’ve come to the wrong door. Like plenty of the other n5MD releases this year, it offers a wodge of sun-kissed optimism that could easily round off a thousand mini-series for every network, plus sales and repeats on FX; its “we beat the world” victory tones are perfect for that, oscillating around a lucrative mid-tempo axis. Plus it’s got everything from Phil Collins finding Jesus (“Transition”) to the porn connotations of “Softy Slipping” (which goes from Bryan Adams album track to astronaut lullaby in six easy minutes, give or take).

Put simply, if you long to get lost in cool cityscapes or want to hear Leftfield’s “Melt” for an hour, you may have found a very early Christmas present. There’s a captivating peace-on-earth vibe across Airborne, one to definitely bottle and quaff in case of an argument Christmas morning. Aerosol’s trump card is that he manages to adapt this charitable electronica for sunshine too—the shiny chimes and army drums of the title track, for instance, means Australians can celebrate yuletide with it too, tanning as the surf gently licks. In fact, let’s all have Christmas with it. Like picnics? Like redemption? Then try Aerosol. You’re practically Hindu.