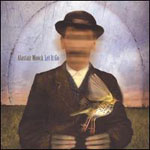 I might as well admit to having a few major biases concerning this album. Alastair Moock’s a friend of mine. I’ve heard this album from its initial mix, listened to it countless times since over the past two years, and am experiencing a bit of difficulty with that delicate thing called “objectivity.” The truth is, Alastair’s a great guy and a great musician. But, to prevent this from reading like an advertisement, I’ll borrow the hat of the “objective critic” and attempt the, perhaps, impossible.

Let it Go is Alastair Moock’s third full length. It was originally released in 2004, and was re-released this year on the Dutch label CoraZong. Based in Boston, Moock’s been touring the country since his debut in 1997, making a name for himself within the American folk scene. In 2004, he won songwriting competitions at the Great Waters and Sisters folk festivals, and has performed the past few years at the Falcon Ridge Folk Fest. He went on his first European tour a few years ago, and enough momentum was built to inspire another tour this spring (he’s especially popular in Scandinavia. Countries lacking natural light in the winter months = enjoy introspective folk?)

Moock usually gets thrown into the roots music category, and his music fits there quite well. Let it Go touches the bases of many of the roots genres -- blues, country, folk -- but as opposed to the straight-forward, strummin’- pickin’ folk of his solo sound, the twelve-member band on the album (mandala, lap steel, dobro, etc.) lends him more force. Moock’s ragged vocal style has been compared to Tom Waits, and indeed the voice that comes from his thirty-something mouth sounds much older.

Let it Go steams open with “Famous Leaving Song,” a rollicking country meditation on how much better it is to leave than to be left. Exploring the subject of what happens when we die -- in a more lighthearted manner than it’s theme-sharing cousin, Rev. Gary Davis cover, “Death Don’t Have No Mercy” -- “When We Call Back Home” is an upbeat, bluesy, rocker. “Home Is Where The Heart Is,” one of the bonus tracks included on the new release, was co-written by Moock’s wife, Jane, and highlights a few of the comical and challenging moments about being bound to someone: “Listen, honey, do we have to go tonight? It’s been a real long week and my back is kinda tight / tell them that I’m sorry, I’d be there if I could / those people drive me crazy even when I’m feeling good.” Another bonus track, “1913 Massacre,” is a beautifully evoked Woody Guthrie cover that tells the story of a holiday disaster in Calumet Michigan. The only track on the album without the band, it’s as a good example of the gentle intensity Moock can render solo.

Moock’s songwriting talent has been acknowledged by musicians and critics in the Boston area for some time now, and with some luck, it won’t take long for a wider audience to catch on. If (when…) the powers that be finally discover this album, I can imagine that some country hotshot -- or the agent of some country hot-shot -- will take on “Unwanted Guest.” Likely, they’ll pull off a much less engaging version, but this is a song that deserves to be heard (even if sung by Toby Keith, god forbid.) “Unwanted Guest,” a song about casting off shadows, shows Moock at his subtle best, coupling haunting, candid lyrics with a gorgeous melody and affecting delivery. The band handles it well too, allowing Moock’s voice to lead the way to the lyrical crescendo of the chorus: “I like to play the host / but I’m done, unholy ghost / No more of you unwanted guest.”

On Let it Go, Moock provides a welcome voice of singer-songwriterly wisdom in a crowded genre filled increasingly with fluff. It’s the voice of a storyteller, from another era, picking up the threads of heroes Guthrie and Prine and sketching out a new American narrative.

(And, yeah, for the record, I’m still wearing that “objective critic” hat.)