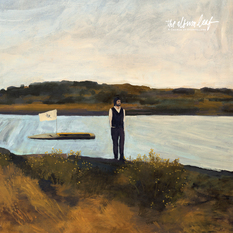 A Chorus of Storytellers

The cover art of A Chorus of Storytellers is an impressionistic likening of Jimmy LaValle in front of a little boat with his “logo” on the sail, earth tones in abundance—the visual equivalent of a Snuggie, basically. That LaValle is this aware of what his music sounds like (reassuring post-yacht-rock), and what the appropriate representation should be, is the first sign that there could be an imminent label change to Wyndham Hill. Like his erstwhile producer, Jónsi (of Jónsi & Alex and Sigur Rós), Jimmy LaValle has made a career out of gentle sounds birthed from experimental glut; no surprise his last album as the Album Leaf, Into the Blue Again (2006), won over converts who swooned more to the violin and simple, almost treacly, expressions of love and devotion than to any avant-leanings. Converts like my mom. After all, “post-rock” may be a forbidding name, but the Album Leaf takes requisite slow builds or classical swirls and drains them of anything unwholesome.

Not that this is a bad thing: the bear hug of Into the Blue Again was top of the line and Storytellers doesn’t attempt much else. Less vocals this time around, which seems at the very least an admission that there aren’t many crucial things for LaValle’s voice to do other than to assert, undeniably, the sentiments implied by the music. His instruments already serve that purpose: a bare minimum of keyboard and drum machine squiggles found throughout the first few albums is here deftly replaced by the surefire combination of Rhodes, live drums, and, sometimes, violin.

The seemingly logical next step after Into the Blue Again would have been to consolidate the choruses and go for the pop jugular. Instead, take the typical “There Is A Wind,” where vocals are muffled a bit and guitar lines swelled but distorted, all for the purpose of distracting from LaValle’s complicated deck of talents, expressing them without offering them up blindly. In this way, A Chorus of Storytellers resembles the Flaming Lips’ Embryonic (2009) in that it’s a characteristic and maybe even obvious album that stuffs a band’s commercial instincts under a protective layer of feints and refusals. So the lack of vocals and drum machines, while at first glance a step backwards, on songs like the opening duo “Perro” and “Blank Pages” ring as more canny than resigned, especially after the four years elapsed between albums.

While the Album Leaf forsakes the reward of coaxing melody out of noise, it keeps a certain mystique close to its chest, earning a substantial breadth of predictable, visceral buildup even as it leaves much to the imagination. Plus, that small area of recognition—where melodies are unambiguously layered, where a payoff is in sight but clearly held at arm’s length—can be a satisfying place nonetheless: the “and here we are / love / together” at the end of “Falling From the Sun” manages to bring the keyboard-with-violin dynamic down a notch without killing the enchantment and space in the piece.

Of course, the fine line Jimmy LaValle walks is that, sadly, of an easy-listening artist, between digestibility and distinctiveness; without vocals or a convincing new direction that at least partially informed the core of his last two albums, LaValle’s latest noticeably droops in its second half, losing whatever momentum and good grace was intuited in its first. But a trademark sound is half the battle, and the successful retreat from the boundaries of pop gives A Chorus of Storytellers the benefit of the doubt. The use of a thick, fuzzed-out drum loop on a song like “We Are” works perfectly as a granted gimmick in lieu of anything fundamentally different, casting the same ole self-satisfied buildup of guitars, keys, and glockenspiel in a dirtier light. In fact, that the Album Leaf can remain this close to background music without giving in to the impulses towards total muzak—or, on the other end of the spectrum, alienating experimentalism—is impressive. The next step for LaValle is to actually take his music somewhere, find a concise conceit to aim towards; a holding pattern is nice, but a real statement from a clear talent would be something to write home about.