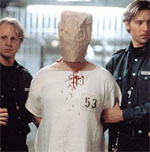 In 1971, a team of crack Masters students was sent to an artificial prison for an experiment they did not understand. These men promptly broke down into packs, adapting unquestionably to their guard/inmate roles in what would quickly become a bloody and totalitarian stand-off. Today, still wanted for question and study, they survive as assorted wrecks and golfers. Yes, the 1971 Stanford Prison Experiment would go on to become a notorious example of Professor Philip Zimbardo’s “Lucifer Effect”: the study of what causes “normal” men to turn to outright evil. Setting up a mock jail in the bowels of his university campus, the professor witnessed the gradual devolution of the volunteer guard students into sadistic, club-wielding tyrants, while the prisoner faction became conversely withdrawn, depressed, and catatonic.

The experiment had to be cut short after just six days for fear of casualties and irreversible trauma, and the fallout of the programme prompted Mario Giordano to fictionalise events as Black Box, later adapted into Das Experiment (2001) by director Oliver Hirschbiegel. Hirschbiegel—who went on to fuel the world’s most palpable Rickroll with Downfall in 2004—chose composer Alexander Van Bubenheim to write a score as liquid as its subject material; capable of segueing from mood to mood to mood and occasionally exploding into mayhem. With the film restored for hi-def and released on Blu-Ray this week, you can now get to hear said score in all its euphoric/nerve-shredding glory. It will wobble your bass, believe me.

At an average of a minute a piece, the twenty-seven cues delivered for the film are more like character introductions than movements. They’re mnemonic and complete little slivers, though, and it’s no coincidence that most of them mirror the headstate of protagonist Tarek, the lapsed journo to whom the whole project sounds like a gas (as well as a chance to earn some serious Pulitzer). His initial mischief in wanting to kick up a row shines through in pieces like “Tarek Beat” and “Cellblock,” all piano antics and fiction synths, a hint of Shaft to the drums. These are counterweighted nicely by the “Dream” idents, which add layers of homesickness to his character (shortly before his admittance to the programme, he hooked up with sexy crash victim Dora, and now clings to her image while behind bars to escape from the tension and horseplay). “Romantic Cello” through to “Dream 2” provide the necessary lounge and corny jazz to cement this dalliance in his mind, with the perfect glow and cello smooch wrapping you in thick hypnosis.

However, by “Dream 3” things have become somewhat prickly. Tarek’s persistent swipes at the more affable guards are slowly polarizing the experiment, with a team leader eventually emerging in the form of sweaty Berus: the meek flight attendant with dark tendencies. Here, Bubenheim takes the fragile “Dream” soundscape and lets it spit ferocious drums, reality kicking in via analogue jungle and snarling, woofer-ripping bass. We are all apes, after all, and twenty men locked in a cage won’t take long to go all out Donkey Kong. “Gefahr”—German for danger—then brings evil white noise to the table, building to the kind of horrific band-saws that wouldn’t go amiss on a Type vinyl; the song’s a proverbial express elevator to Hell. Things are fast becoming deeply uncomfortable: you can feel the snap of compressed air in the plastic cells, the electromagnets thwacking as bolts slide home. Bubenheim renders Tarek’s sense of helplessness and remorse through the “Dark Piano” requiem and monk hum of “Dark Choir,” reaching his peak with the horns of “Knast.” By this point, the guards are completely untouchable: all inmates are gagged and lashed in duct tape, and the claustrophobic Tarek has been stuffed in a safe, cramped and hallucinating nightvision dreams while the guards debate rape outside.

To say the film has become topical in the wake of the “Torture Lite” allegations is an understatement—an American remake is already on the cards, and you can see why the distributors waited for Change We Can Believe In until clearing the hi-def release. Hirschbiegel’s film is an incredibly visceral one (I’ll be extremely surprised if next year’s Elijah Wood/Steven Soderbergh imagining goes as far as this version does), but to say Bubenheim’s score matches the visuals for impact might be stretching it slightly. True, he does do his best to stir up a wide rainbow of extremes—personally I most enjoyed the cheerful funk and humour of “Test,” so innocuous at the start of all the heavy stuff—but a little developing of some of the more potent cuts might have seen the score getting a physical. As it is, the only tangible extract from the Das Experiment OST is Linkin Park’s “One Step Closer,” blasted in Tarek’s apartment while he’s weighing up the chance to participate. There’s not much I can say about that one that hasn’t been said before—except maybe “Don’t worry, 2001. It’ll all come out in the wash.” By contrast, Bubenheim’s work is a much more subconscious, unsettling gathering which genuinely stirs up emotion, giving you some idea of the horror those students went through in ’71. If the compositions here still aren’t lively enough for you, then simply wait till 2010 for the Hollywood remake. In my crystal ball, I see a lotta Linkin Park.