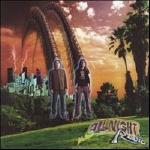 My friend Mr. Aman and I were cruising about in our European sweaters, looking, without question, too cool for school. And in fact we were; we both skipped a class that morning. And on our way to skipping class, we noticed two things: first, hippies suck. Second, it was fucking cold and windy.

Now, European sweaters may have nothing to do with anything, and the fact that we're both too cool for school may also be entirely irrelevant (though it needs to be mentioned, I think, to dispel any confusion). But hippies do suck, and it was fucking cold and windy, and those both apply to our current artists under analysis, All Night Radio.

Despite a pedigree that spans many genres/styles, All Night Radio have elected to go down a pernicious road: pure sunny shameless late '60s pop psychedelia, and while I shouldn't have to mention Brian Wilson, I will anyway, because these guys love the Beach Boys. So what this has to do with the validity of a particular social group and/or the recent climate is this: first, this is pure derivative, ambling, stoner pop-rock, and second, it's as summer as can be. Yet, it was released in winter, and friends, even now it's still 25 degrees Fahrenheit outside. This makes the incline up the hill to my approval pretty damningly steep.

The Clientele did the throwback thing well, because it wasn't so absurdly sunny; their arrangements were at least remotely mysterious, and had a kind of eerie, wintry nature to them. But All Night Radio are so difficult to like or take seriously because their plagiarism is so bereft of any of its own mystery that the possibility of becoming intrigued is buried almost from the outset. Armed with a basic quaternary of rock's typical instruments, drums, guitar, bass, and keyboard, with occasional glockenspiel, organs, theremin, strings, and piano (not to mention more reverb than you can fit into the Grand Canyon), ANR will put you to sleep gently, at least.

Which isn't to say that the arrangements aren't lush, the number of elements included extensive, or the production solid. But it's all so terrifically boring. The first four tracks of the album are indistinguishable from one another, the instrumentation safe and just barely evading complexity, and the vocals so soothingly airy and reverbed that lyrics are a moot point. I'm more than willing to wager that ANR are plenty talented, but that talent is so frustratingly misdirected towards the "harmless" section of the CD-buying demographic that they simply fail to keep you interested.

Amidst the blandness, amidst the pleasant and inoffensive melody, are two striking pieces, "Oh, When?" and "Winter Light." The former is an uncharacteristically dark, occasionally atonal piece that plays with dissonance to refreshing effect, contrasting its occasional bursts of melody with jagged guitar and limber bass work. The latter, while fitting in with the generally warm tone of the album, nonetheless has excellent bass work and a sweet, uncharacteristically remarkable melody. But opener "Daylight Till Dawn," "We're on Our Wave," and "Sad K." are plodding examples of the uninteresting, similarly-paced easy rock that characterizes the vast majority of the album. Occasionally, like on the gargantuan (and deplorably so) closer "All Night Radio," brief interludes of creative bass work, where (gasp!) space is actually used to wonderful effect, are overwhelmed by quickly encroaching sunshine innocence that tires itself out before half of the disc has stopped spinning. The melodies, too often swamped in multi-instrumentation that's too ornamental to trick you into thinking they're substantial, are frustratingly vague.

Perhaps if I listened to Spirit Stereo Frequency while I was in the car driving through southern countryside with my girlfriend, I'd like it a lot more. But then again, atmosphere and season shouldn't be the deciding factor on musical quality, and on that front ANR are too decidedly derivative and mediocre in their influence-blazoning. Call it bad timing, if you want, but I'll just have to regrettably say it's probably got more to do with the music. I mean, Jesus, guys, you finish the album with crickets chirping as though we were sitting around and getting stoned by the campfire. But I've got no campfire, no s'mores, and finally, no time to amble around in aimless unoriginality. And without the weed, I've gotta say with some lucidity that I've got more interesting stuff to listen to.