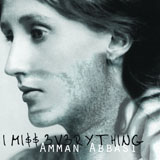 In 2009, ten months after their cinematic yearbook Something Like Nostalgia lit up the correct shoegaze blogs, the Abbasi Brothers warned of A Change In Direction. Or at least one of them did: Amman Abbasi, the one with the razor, had just finished scoring two sports documentaries, and was now in a pre-volcanic Iceland experimenting with vocals and guitars. Not very experimental, you might think, the big mister-soundtrack man, but for a musician whose interest was melting keys to stimulate childhood trauma, this was practically cross-dressing. It kept Abbasi Minor busy, and before both brothers shortly reconvene to throw fans a Simon & Garfunkel cover (true story), Amman’s on a mission of his own: to take ownership of the demons that survived his debut and bury them in shimmering acoustics. And, after that, bury them again in punctuation, if there’s anything left twitching that is. Hence, we have I mi$$ 3v3rything, the fruits of Amman’s wanderings in Arkansas, New York, and Reykjavik, and quite possibly the most emotional short album Cximple Records will ever put out. And that’s a bold bet—this is their first release.

If the change in direction is IM3‘s main seller, Abbasi unveils it slowly, merrily performing his signature act of turning hope into a piano chord on “It’s Almost Over Now.” You can tell he’s been scoring documentaries about athletics for wounded soldiers—the daybreak piano leitmotif at the heart of the track is cosy enough for a bank ad—and as the epic little bridge nestles against warm pads, straight away it becomes obvious it’s Amman the younger who’s the brooder. To say this is only the calm before the aforesaid storm might be overselling it, but when “Are All The Dogs Okay” kicked in afterwards, I flinched. All prickly electro like the theme from Qix, its two-note synth hook has been the genome for a lot of dark trance. This is definitely toothier and more clunky than the predecessor he composed with his brother, and—probably as intended—packs all the suggestive mood-swings of a professionally mixed film score.

However, it’s IM3‘s evenly spread temper that’s its arsenal, plus the fact that its author weighs out the same quantities of passion when dishing out both piano dirges and angelic electronica. “I Am Growing Young & Old”‘s little Casio fanfare begins with baby drones moaning, falling into a victory stab that flits for four minutes like the word’s most pesky moth. Here, Abassi’s spread of machines and keyboards burn up a 90% outro, pulling the rug the same way he did on the straight-edged tabbing of “Bismallah.” Whatever Abassi went through to respond with all this affirming music is surely vanquished now, unless it’s something so primal it can only be traced to deep in his parents’ genitals. But even those issues can be fixed in time—to quote Dennis Hopper from InnerSpace when he’s jousting inside of the bile duct, “OK pal, here’s how I spell relief.”

And here’s what I liked most about I mi$$ 3v3rything: it remains warmly aloof while keeping its feet on the ground, ready for duty at a click. Abassi might be an idealist but he’s also clearly employed, keen to get you fixed up quickly. Whatever he does, he’s definitely no flosser—that’s evidenced by his cry of “I’m losing all my teeth” on “I Mi$$ Mys3lf,” where he gingerly takes ownership of his ageing. To see what Yousuf might contribute to training when the siblings reunite will be interesting, because IM3 is no holdover record. To fans of the brothers, the Junior Boys, M83, and Eluvium, I don’t think I can plug this one enough, but if you’re looking for something to help reduce tension and don’t know where to start, try A.