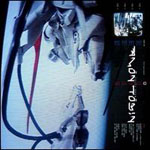 Tweet
Foley art (the attempt to create and mimic natural, everyday sound effects on film) is one of the most deceptive aspects of cinema. In the final product it looks like all the sound originates from the visual source, but there are few effects that can't be generated in the studio. A lot of it is fairly banal -- going through 50 different versions of a cough, or someone walking down steps -- but foley studios can potentially conjure up the fantastic and otherworldly without ever having to go outside to record anything. While supposedly devised from a combination of field recordings, live instrumentation, and studio manipulation, Foley Room seems infused with this sense of god-like creative power. While an artist like Herbert, who likewise draws on an infinite bank of possible sound effects for his music, tends to work within the paradigm of mundane everyday objects (see Around the House [1998]), Tobin seems to be going for something deliberately elaborate, futuristic, and alien. "Kitchen Sink" may actually use the sounds of a kitchen sink (as well as perhaps being a joke on the amount of objects/instruments/effects used on the album), but this humble source material is imploded into endless layers of various watery electronics. Its shards stick out in every direction, often halting the beat altogether. Herbert also tweaks his sounds beyond recognition, but this is miles away from his relatively minimal house. Foley Room, rather, is all smoke and mirrors, and it's hard to imagine Tobin ever giving away his secrets, or having any political platform beyond constructing sounds for their own sake.

If I were to carry the comparison even further, I might be tempted to suggest that Tobin represents a far less democratic and more politically reactionary counterpoint to Herbert. I could pour on some Adorno and talk about how any art that perpetuates illusion is inherently regressive and patriarchal, and given Tobin's recent soundtrack for one of Tom Clancy's Splinter Cell games, Chaos Theory (2005), I'd have a lot to work with. Still, I don't entirely buy it, because even if Foley Room is practically begging to play in THX Surround Sound over the next Bourne film, I don't associate it with the crass manipulations of Hollywood in the same way I do with the newest Explosions in the Sky album. The main difference is that, even if this album is sometimes aggressive and schizophrenic to the point of distraction, Tobin namely just wants to envelop you in his sonic universe. In this way, the music doesn't push any pre-arranged conceptions of how the listener should react to it

Foley Room is also informed by film soundtracks in the sense that it tends not to distinguish its parts by identifiable beats or melodies, so much as by shifting mood and pace. Opener "Bloodstone" layers drawn-out violin drones overtop vaguely klesmer-sounding glissandros on a piano, before thick breakbeats shift the track into gear. The main motif of "Esther's" is a revving engine, and in the track's more subdued sections, Tobin contrasts it with that same delicate tinkling piano. "Keep Your Distance" and "The Killer's Vanilla" are more even throughout, with the same murky experimental jungle that distinguished Out From, Out Where (2002), with the exception of an ambient passage in the middle of the latter -- an appendage which seems kind of unnecessary, considering its incredible beat could have easily sustained the whole track.

Tobin's abstract explorations aren't always superfluous, though. The aforementioned "Kitchen Sink" constantly tears the listener away from its relatively simple beat with its layers upon layers of aquatic electronics, in a way which is disorienting but exhilarating. "Horsefish" features some really interesting harp, although the track as a whole is a bit disappointing, since the sense of impending violence which it suggests never actually amounts to anything, always bubbling just below the surface. It provides pretty solid proof that Tobin will probably never be much of an ambient artist, insofar as even with this relatively subdued track, there is always the suggestion of mounting tension. In this sense, his music really is on a par with suspense/action films.

The second half of the album is a little more hit-or-miss. The title track is another highlight, with its furious, bouncing industrial percussion sounding like it should score a shootout in an abandoned factory. "Big Furry Head", on the other hand, is dragged down by its MGM-lion-roar sampling, while the vocal samples of "Ever Falling" and "Always" have the opposite problem of tending to reduce the edge of the tracks they accompany.

Despite all the ingenuity on Foley Room, it's hard for me not to miss the days when Tobin belonged as much to jazz as he did to any electronic genre. Given the obvious superiority of those early albums, which contained some of the best stripped-down grooves of the '90s, his newest LP might seem a tad overloaded, to say the least. It's also frustrating, because considering that Foley Room contains some of the finest production I've heard in some time, and the instruments are played with stunning virtuosity (thanks largely to the string contributions by Sarah Page and the Kronos Quartet), Tobin could probably do whatever he wants at this point. Still, it's these elements which make even the less interesting tracks enjoyable, and the technological achievements of Foley Room are awe-inspiring alone. There's probably enough raw material on here to make six albums, and I hope he can stretch out his ideas a little more in the future.