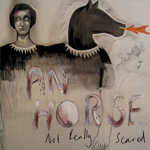 If M83’s Saturdays = Youth is a nostalgia-laden revisit of adolescence’s more forlorn melodramas, An Horse and their debut EP Not Really Scared over-fuel the formula and accelerate it into the age’s hyperawareness. This is punk with a heart of uncracked pop in the bar-chorded veins of Pretty Girls Make Graves or Tegan and Sara: crash cymbals wash the senses as this duo keep the alleys clear out behind the genre’s over-stylized facades. Amidst rolling tom breaks and resonating choruses of “I’m not really scared,” An Horse are tapping exposed, raw puberty in a catchy and likable way, which is sort of feat in itself. This has been done so many times you’d think it fetid, but this EP announced itself amid an afternoon of varied listening.

Each song seems to build upon the last, from the short and tight “Postcards” and its hummable “Two postcards in a month or so / Well I don’t know / I just don’t know,” to the overdrive in the extended outro to “Shoes Watch,” which is the EP’s one instance during which it allows its excesses unrestrained reign. Most of Not Really Scared keeps it simple: distorted guitar over sugared drum beats, major chord enthusiasm catalyzing some instantly recognizable version of heartbroken universality. But it’s that simplicity, and immediacy, that latches on before analysis has had its turn to disassemble.

It’s unclear how well their formula of uncomplicated pop punk might hold up over a track list twice Not Really Scared‘s length. I hope they manage to maintain this EP’s nearness of volume without resorting to undercooked ballads or overambitious concept songs, but for these five songs, and especially ending as “Shoes Watch” does, An Horse can make a believer of the most cynical of listeners. It’s a Happy Meal of a listen, and a surprisingly satiating one at that.