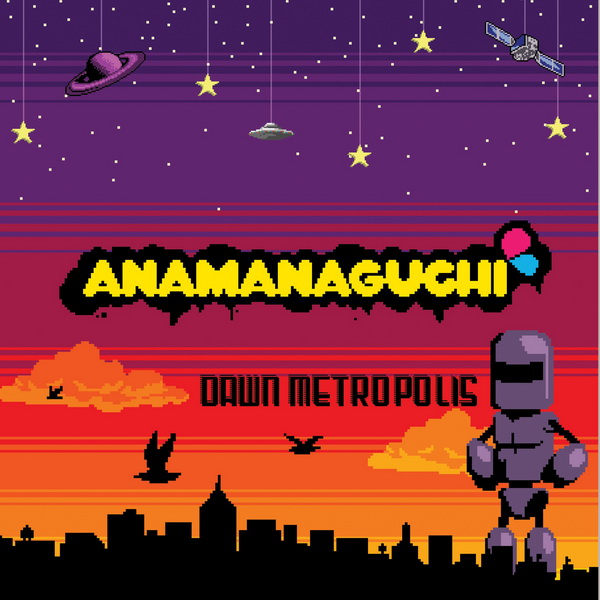 If chiptune’s serious about becoming the new punk, then here’s its Jeremy John Ratter. No poetry, breakdowns, or any of that conspiracy malarkey with Anamanaguchi, though: just good ol’ fashioned hyperactivity shot through with a Super Soaker of fun. The New York breakaway chiptuners—broken in that they blend the guts of their looted NES with sunlit soda-drenched pop punk—were always a safe bet to act as ambassador for the genre, having been part of the 8-Bit Collective since the day it first picked up the soldering iron. That Dawn Metropolis is one of the first chiptune releases to actually make it to wax is testament to its quality—-no one, not even Dr Robotnik himself, would have questioned Peter Berkman and co’s ability to make you hanker for 1985. What’s more, on their first album physical Anamanaguchi run past and pwn even their expectations: it’s got longevity that translates into shelf life, the electric guitars reeling in the peekers who only came to hear their old Game Boys. Pick up “Blackout City” and press play—there you shall dice with relentless rainbow hi-jinx that feel like the world is finally reaching completion, more anarchic that the Crazy Frog but with the added bonus of decorum. To experience Anamanaguchi is to ride on a height-restricted rollercoaster: the bends are semi-familiar, but the anti-grav whooshing and contagious raised hands keep ears and slack smile firmly pinned. In the space of twenty-seven minutes they show that their sound could be more than just a fly-by-night frolic and demonstrate a serious power of finally bringing their genre to the mainstream (and not just counterfeiting it like Crystal Castles did). What does punk mean anymore anyway?

That’s a rhetorical question. And the snags? Hardly worth evaluating. One might expect completists to turn their noses down at screeches being diluted with Fender hooks, but the 8-bit community has carried Dawn Metropolis with pride, many of the hardliners proclaiming their jealousy that someone’s finally made a touchstone for their cause célèbre. Even the fanatics who refuse to join in can at least appreciate the “vainglorious embeds”:http://www.dawnmetropolis.com currently lighting up the band’s homepage, where you can preview the whole album for less than a game of Space Invaders (i.e. 00000). The arcade analogies are important here, I promise, because if you can’t dig the value of hi-scoring heaven then this record will leave you in its wake: “Overarrow” is as mystic as original Double Dragon, pads quacking like Nintendo Duck Tales, and walls of circuitry gobble back the kilovolts on “Jetpack Blues, Sunset Hues.” The fact that it’s all so analogue-tastic just renders it oddly timeless—the melodies are killer pop, made all the more carefree by the gushing love of hyperactive buttons. Yes, they might mash their joypads like a spiraling pilot, but Anamanaguchi are scientists, performing MacGyverisms in a cartridge plant before getting fucked off their nuts on Pez.

And then they go to war. Album closer “Mermaid” is a U-turn in a revelation in an album that hits you like neon; a Use Your Illusion (1991) for Barcode Battlers. It starts by arming Franz Ferdinand with Brainiac arrangements, Terminator metal bubbling, then portals fizz into a beer-stomping chug that runs till the death of the nebulae. It’s chiptune—a genre based on elite black t-shirted boffinry—going beyond the highs of nostalgia and pointing to something doubly engaging. With the six preceding tracks in tow it legitimises the genre in one stroke, confirms it as a practise that competent musicians might like to stretch their legs in. What cements it, though, and rockets Dawn Metropolis to the middle ground of my own personal, burgeoning Year End List, is how it beautifully justifies all those hot afternoons I spent playing Gremlins 2 in the dark, not quite sold on the “paradise outdoors” thing and the permanent games of football. Outside was dog’s muck, scorching concrete and older brothers pulling handbrake turns. In front of me was a square flashing universe, one that Anamanaguchi have turned into a rock opera that us adults can now enjoy ironically. Ironically, that is, ‘til you’re alone in the house and can pretend you’re Captain N again. King Hippo’s pixels are about to come unstuck.