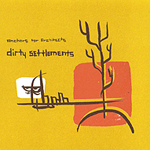 Here and there I’ve seen talk about trusty old Mission of Burma picking up the post-Argument torch, so please permit me now to make a crucial distinction between Burma and Fugazi. When they’re not balladeering, Mission of Burma fire napalm-drenched chunks of chord and devastating drum rounds, a heavy artillery attack shrouded in the stray shrapnel and smoke of Martin Swope’s/Bob Weston’s tape trickery. Fugazi wield their weapons like snipers and strategically litter mines for their explosions, their experimentation integrated on the more fundamental level of instrumentation and song structure. They’re also an entirely more groove-oriented outfit than MoB. Burma perfected their type of artfully brutal assault on Vs., long before Repeater, and while I won’t deny that Fugazi have an influence on how just about any decent punk record is assembled these days, Burma firmly established their core identity in 1982. The breakdown on “Weatherbox” is nothing short of divine revelation. Burma are fucking punk heroes, and, in my mind, second only to Wire in the importance of their contribution to advancing the genre past its adolescent stages. Okay, maybe tied for second with Fugazi.

There’s also a big distinction to be made between Fugazi and our heroes of the moment, Anchors for Architects: one band is from D.C., and the other is from L.A. I dare you to hear “In the Nineties” and not hear some “Do You Like Me,” “Feelin’ Like Salieri” and not some “Nightshop,” or, hell, interlude “Gatz” without hearing the manipulated sounds that open The Argument. On a mostly unrelated note, I dare you to hear the verses of Fugazi’s “Cashout” and not hear Chili Peppers. Double dog dare.

Anchors aren’t quite Fugazi Jr., though. While some comparison could be drawn to Picciotto, Andrew Jeffords’ enthusiastically indolent vocals owe more to Malkmus and Mark E. Smith than they do MacKaye, and whereas later-day Fugazi records wore female vox and strings and misc. like so much (effective) accoutrement, Anchors take the more equilateral step of making that shit an actual part of the band. Anchors Debbie Bruce and Pauline Lay have their voices and bass work all over this thing, and Pauline shreds some serious violin. I haven’t heard so much wonderful bowed discord since Ligeti. The band enlists more guitar playing with Tim Gomez (also keyboard) and Aaron Levine (also harmonica), the tight, ferocious drumming of Davin Bluhan and some cat named Mike doing “percussion” on tour. It’s a punk battalion.

Does “Forecast” just sound like Fugazi, or does it sound like Fugazi reinventing the cool keys-and-bass nod of the Beastie Boys’ “To All the Girls” into a jam laced with frenzied fretwork and fills? Does “Great Ships” really feel like something from End Hits, or does its overlapping and juxtaposed two-chord couples, which unfurl into curtains of keening distortion, sound more like a Slint epic compacted into 2:58? You know which options I’m serving on sundaes. Perhaps, however, it should suffice that in a time where Fugazi’s not making records, someone’s doing it for them. Maybe that’s how much we should love Fugazi. Maybe that’s how much we should forgive a band for loving what we love.

Anchors for Architects make the most of staying faithful to their heritage. Their understanding of lean dynamism occasionally rivals their father’s; the opener stutters to a start then careens through a minute of nitrous guitars and squealing violin before slamming the brakes, leaving inertia to carry a siren wail out through the windshield and on into another wall of rock. This band knows how to fucking romp, plus the best way to get to the party in the first place. “Rattlesnake Eggs” twists pretzels out of its opening guitar lines, the song lurching forward, and a chill groove provides ample set-up for the shattered finish. Jeffords and the ladies speak off-time of each other on “Fiscal Year is Here,” but they join together for a manic shriek before the axe comes chopping through the door, as if it’s Jack Nicholson in the role of “Fiscal Year,” an amusing and probably intended effect. And 6 ½ minute “Feelin’ Like Salieri” sends a guitar run scurrying quietly beneath brush as inspired bass first foots the beat then worms through its spaces, electric clangs foreshadowing the song’s storming rock-outs. In its torrential conclusion a descending bass line appears, soon echoed by the band’s vocalists until the ruckus cuts out, leaving the falling line to drip reluctantly off some lone leaf. Fugazi’s Amadeus could admire the effort.

Not every track’s a hit (for instance, cheekily titled “Give Us the Same” is a Gameboy Variations reprise of “Forecast”), and Anchors share their progenitor’s penchant for vague but stringently political lyrics that manage the prime punk contradiction: immediately inflammatory yet ultimately inconsequential. Nevertheless, the band’s on to something with “L.A. is a Desert,” a sedate closer that stands as the most poignant fulfillment of the thematic implication behind the album name Dirty Settlements, the song’s title being what it is and Pauline’s violin rising like wisps that elegize the embers of a razed outpost. It could be that identifying this band’s home might not end up a merely facetious point, that Anchors for Architects might someday deliver an album which fully capitalizes on what their land pricks out of them. They could destroy SoCal in emotionally diverse ways never attempted by Tool. Fugazi had D.C. to worry about.