1. A Beam of Light Folds Back Upon Itself…
2. … Producing Great Jets of Radiation.
3. Everything Disappears in a Tunnel of Light…
4. … Where a Star Once Was.
5. Like the Foot Prints of an Invisible Man…
6. … Walking in the Snow. 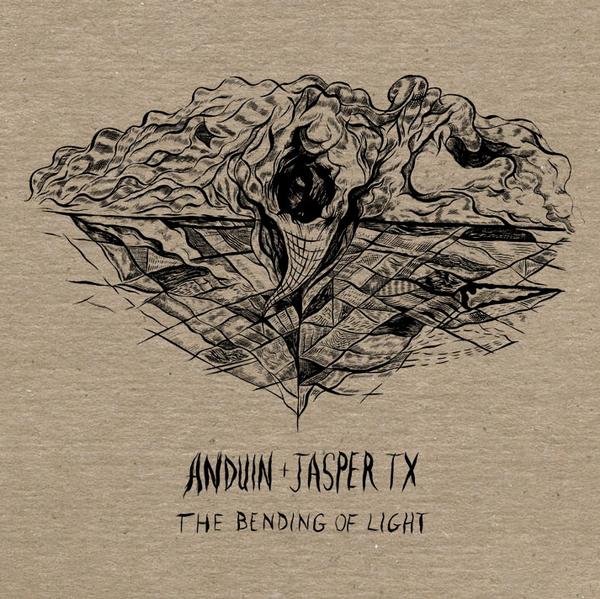 The Bending of Light

There’s a phenomenon that exists between deep space and science fiction known lovingly as spaghettification: namely, the process by which your body unwinds as it’s claimed by a black hole’s tidal forces, wet strands sliding into alien hell. Gruesome, unsanitary, and not the sort of thing that us non-cosmonauts will ever have to live through (I did come close the first time I dried my hands in a Dyson Airblade™, though), but precisely the kind of thing that gets drone composers drooling, determined to commit the sensation to tape. Perhaps inspired by Professor Stephen Hawking’s recent flirtation with death, white noise bigwigs Jonathan Lee and Dag Rosenqvist brought their heads together as Anduin and Jasper TX, determined to translate six Carl Sagan quotes into the sound of stuff dematerialising. Not spaghetti, per se, but light—the way it would feel if you could see it being eaten by the cracks of space, a fantastic, slow wonder in progress.

The Bending of Light is the mouth-watering and mind-boggling sum of their findings, sent back via the upcoming SMTG label (Richmond’s answer to Type Records). Now, strictly speaking, light is radiation and sound is a wave (or something) so the two belong at different ends of the lab, but I can’t think of a clearer blurring between them than what’s playing out on these soundscapes: all soft glows bristling with dark activity. “A Beam of Light Folds Back Upon Itself” lifts the curtain on a calm collapsed star, blissed-out Blade Runner loveliness in action. There’s no make-believe roaring or subliminal screams, just light, free and shining as only photons can. In terms of synaesthesia, it’s as direct a sensation you’ll experience as in the heights of Metamorfrozen’s Antarctica (2007)—another journal of imagined activity on a place that its authors never went to. Black holes are darker than the South Pole’s long winters, though, and “Like the Foot Prints of an Invisible Man” hums like Canadian post-rock, a silicon pulse of a new kind of life allowing guitar tabs to peep through the gloom. There’s a fair bit of bending of darkness to go with these symphonic hues, and it becomes more and more rhythmic as the record progresses. Luminescence doesn’t always equal lounging, you know.

None of that stops The Bending of Light from being an expanding, exploratory, mini-masterpiece; if Biosphere’s “Poa Alpina” is a quick-fix of Norwegian caverns, “Where a Star Once Was” is the trapdoor to 2001 (1968), the star-child asleep in his amniotic sac. Guitars glimmer like freshly-formed hydrogen molecules as rays break out from nothingness, a dark hoar rising to challenge the riff. There’re not many tracks out there that can paint the politics between particles so clearly, and to listen to it loud through good headphones is to lie down in a particle accelerator. When the spark in the prism does eventually die, it leaves you in no doubt that Lee and Rosenqvist are a fine pair of alternative composers; the sense of foreboding their album creates should appeal to more than just physicists. And especially, I love the way The Bending of Light motions that all things holy can be warped, and sets about making its case with the precision and bite of a filmmaker. To see ghosts in the dark is one thing, but to draw them so clearly amid swathes of sun requires a special breed of steady hand.