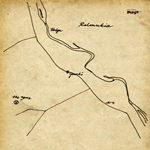 There’s a history, I think, that is being lost as contemporary notions of drone music get tied more and more directly to metal and less and less to Pauline Oliveros or La Monte Young or, hell, “Heroin.” And I realize that’s a bit of a reduction since the lineage of contemporary drone requires that we insert Merzbow before Boris, and I certainly don’t think Sunn O))) is ignoring Metal Machine Music for Metallica, but the way drone—as a genre, and not as an instrumental technique practiced forever in non-Western music where instruments with dedicated drone strings are common place and in Western classical music from Beethoven to Wagner—gets written about tends to lose the plot in favor of the metal theatrics. Kalmukia is either trying to have it both ways or trying to confuse the two, so I think it’s worth discussing.

Modern drone music essentially exists in three strains: the avant-garde and often acoustic classical-descended strain of the ’60s, ’70s, and ’80s pioneered by Young, Oliveros, Alvin Lucier, Folke Rabe, and Yoshi Wada which sought to explore the effects of time on sustained notes. The second descends directly from this group, where electronic artists like Tangerine Dream, Brian Eno, Coil, and Eliane Radigue (to name but a few) pursued the same effects on electronic instruments in various genres. Both of these groups saw the incidental tonal shifts produced by strings, body, tuning, fragility, ambience, attack, decay, sustain, and release as fundamental to the composition, elevating ideas like just intonation and the functionality of equal temperament into our musical lexicon. The third group, represented most simply by Sunn O))), tends to add the gothic theatricality of certain strains of metal to the mix while stretching out more familiar phrasings to agonizingly slow speeds. There are links, sure, but here the artists tend to view the affects of time as incidental to the composition. That may seem like a subtle difference, but it’s not.

Here’s an example: take a Charalambides tune from Joy Shapes (2004) and a track from Oliveros’s Accordion and Voice (1982). Both are drone insofar as both rely on droning, but now matter how brutal, elongated, and wrenching the former may seem it is not delivered with the same brutal austerity or stripped sense of purpose as the latter. It’s the reason why I tend to balk a bit when Keith Fullerton Whitman and Stars of the Lid get batted around as the perfect examples of how to express emotion through subtle changes (even here by CMG’s staff): make no mistake, I think these artists are brilliant, but compared to Oliveros or Radigue or Rabe they’re are about as subtle as a fistful of anvils. Which isn’t a value judgment, to be sure, since all of these artists are fabulous; it’s simply to point out that calling Sunn O))) drone elides a lot of history, but playing Radigue’s Trilogie de la Mort (1998) for a Sunn O))) fan might be pointless. Not even in the same ballpark.

All of which is to say that perhaps the most notable thing about Kalmukia is how it plays both angles in what is either a genius attempt to synthesize then and now (or at least Eno till now) or a mess. And I think opinions will range, since I can easily see drone purists choking on opener “Bones in the Sand,” in part because it sounds like it’s trying to retcon Sunn O))) or Earth, and in part because it’s not really as good as Sunn O))) or Earth. That grainy guitar riff that anchors the piece is just a little too familiar, sounding like Stephen “Did Some of Kalmukia’s Artwork” O’Malley’s work on KTL’s “Estranged” (or, less charitably, curiously like David Gilmour’s opening to “Sorrow”). The whole thing is too…narrow, somehow, too staid to mine the theatricality necessary for metal drone and too much action to fit into traditional interpretations.

And that’s a shame, because once the band gets past that opener they do sort of get to have it both ways. “Kalmukia—The Discovery, Wiring, Invasion” mines new member Hildur Guðnadóttir’s brilliant cello work to play around with traditional drone concepts. You can hear the flutters of space between phrasings, as Ilpo Väisänen and Dirk Dresselhaus create a grimey but emotive bed of noise beneath. What’s brilliant (and what actually may be happening, though it’s at times hard to tell) is that part of that noise sounds like loops of the cello lead being sliced off and set akimbo in pace with the lead. The result is that even as Guðnadóttir starts to play more adventurous melodic phrases her tone is swallowed by the encroaching noise, glazing drone on top of an increasingly pastoral and eloquent solo. It’s a brilliant track, even as it spirals into nothingness and the resonators get turned on towards the end.

The trio has moved even further from Väisänen’s roots in Pan Sonic, though the dub sense his first band evokes is still present. “Effect Of Discovery, Test, Alarm, Catastrophy,” for example, spins on stereo depth and bass-filled space. Again writhing around droned phrases, delayed tones are deployed and spun out of the mix by turning the mod knobs to filter the results. There’s more of an industrial feel to the track, in the vein of Coil; the thing is positively creepy in a way that “Bones in the Sand” only tried to be. And the way “Aftermath: The Mutation” offsets that feeling is also brilliant. It’s the busiest track here, more reminiscent of Angel’s previous live releases, where chimes and cymbals and bells are brewed into a wash that blooms only because of the steady bass drones that roll beneath. It’s a brutal assault that rails furiously until single notes begin to be chimed over those same subsiding drones that slowly, over a steady pulse, mutate into something pretty—seemingly cheesy until you realize the track’s title references mutation.

Even despite the opening stumble, hearing a group so effortlessly move traditional drone concepts forward in a way that might also appeal to metal drone fans is an exciting prospect, though it may take a second studio album to capitalize further on the idea. Also: Guðnadóttir is one awesome cellist; her work is worth the price of admission alone. So Kalmukia succeeds despite its flaws, and even offers a bridge backwards to the mid-period drone stuff that makes robes and caskets look like Tinker Toys. Oliveros would rip that shit apart and build a new accordion out of it. Angel is most of the way there.