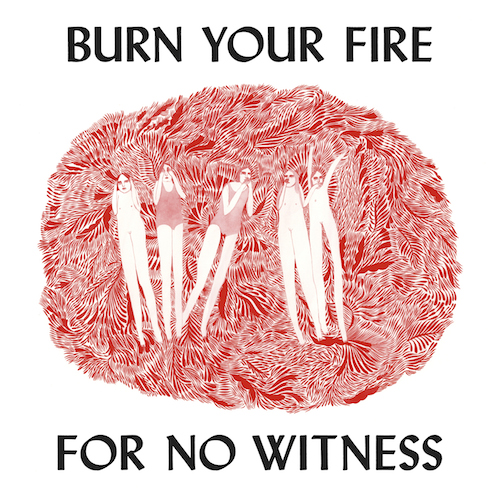 Burn Your Fire for No Witness

So there’s this Ergs! song that I just discovered, and in the three-odd months I’ve spent trying to write and rewrite a review for Burn Your Fire for No Witness—a triumphant, utterly confusing record with subtleties I call shitstorms—it’s taught me more than Angel Olsen has about what she means when she writes in overwhelming platitudes and superlatives, only to then say “sometimes”. The song in question is “Books About Miles Davis,” taken from the NJ pop-punk outfit’s second record, Upstairs/Downstairs. It is comprised of simple pop-punk magic: a few chords, a bit that’s louder and more memorable than the rest, and a hell of a lot of wishful thinking. Wishful thinking sounds good, but on “Books,” it’s cleverly redacted in the place you least want a redaction—the chorus. The first chorus says “You might say I’m falling in love”; the second “that I’m slightly insane”; the third “that I should probably go.” Each gesture feels grand and sweet, easy to shake off as the stuff that happens in songs–hail made-up feelings–but each is also kissed off with a touch of inevitability: “and you probably will.” That’s the hilarious, dark songwriting I love: the kind that takes the feeling of butterflies in your stomach and reduces it to probability.

Hearing dude from the Ergs! sing “and you probably will,” weaving an agonising ellipsis before his words with a fleeting guitar riff, has taught me who Angel Olsen is. She’s a folk rock fact checker, revising her lyrics until she’s certain they’re true, redacting them until she’s left with the minimum number of superlatives a record of love songs is required to have. Few artists are as considerate with their words; few have mastered the word “sometimes” like she has. It has a couple of cameo appearances on Burn Your Fire, making her melancholy sound accurate, much in the way Bill Callahan checks whether or not he’s said any other words than “beer” and “thank you” that day by going over the words again and again. On “Hi-Five,” “sometimes” is slapped over feedback and a distorted vocal, ferociously crying out for a moderately good lover, a little less loneliness: “I need someone who believes / Sometimes believes! / Not always believes!”. Olsen is calling herself out, but she’s also calling out break-up records as an institution. Burn Your Fire stands against records that damage and internalise by sticking to their convictions, instead of meta-analysing and working out where the lines are drawn. She asks “Do you believe?” and insists “I do!”, but with sometimes in mind.

It’s such a great word, in Olsen’s hands. It mends sad songs. It comes in commanding sentences, ones that stride forward and know what they want, but with a tentativeness. On “Windows,” she goes from “Won’t you open a window sometimes?” to “What’s so wrong with the light?”—after a moment’s obscurity , the song opens up, its morose bass notes giving way to shimmering piano and the kind of drums that make an indie rock song march. Like Michael Gira, Olsen is a complacent wizard—she brings the sun, when she wants to. Burn Your Fire is a struggle between the definitive and the uncertain, and while a lot of Olsen’s best lyrics are slight and surprising—two ideas paired together that sound faintly familiar, but are ultimately disjointed, like “I kept my mouth shut and opened up the door”—she can also be strikingly definitive, full of dramatic melodic climaxes and avowing, like “I am the only one now!”, “I don’t know anything!”, and “My body be revived!”.

Still, my favourite Olsen songs are the ones in which her sometimes contingencies beat down fantasy: not fuck the world, but unfuck it. Take it back. “Iota” is a truly idealistic song, on first take, filled to the brim with slogans that would make Lennon and Harrison red with envy. But with its calm acoustic brushes and its Pink Moon (1972) hype—those bass notes leaning over Olsen’s chords like a comforting arm that doesn’t rest on you long enough—it falls back to reality. Olsen shifts her pristine hum of “If only we could always stay the same” down into a sombre octave for a head-down admission: “We’d close our doors and then we’d go to bed.” It’s the small gesture that comes out on top. It’s the unchanging that’s beautiful.

“Iota” is a rare moment on Burn Your Fire where Olsen isn’t distanced from her listener, but instead squares up to them. Another is “Enemy,” a song recorded so close-up it could belong to her debut album Half Way Home (2012) and its clean, one-take aesthetic. On that record, Olsen sang “sometimes” and it came out with none of Burn Your Fire’s ambiguity—the clean production was like a shot of eye contact, and the word was used like real life was still being lived: “Sometimes, I need you to be the one to call!”. Olsen’s songwriting has since become closed off to that kind of direct confrontation; as her lyrics get slighter and smarter, her music has gotten murkier, employing more rock forcefulness at the front of the house, her voice slipping out, ready to disappear. It’s drowned out on “Unfucktheworld,” which gives it the dream-like quality it pines after. A song later, it’s booming, but coated in distortion—the whole of “Forgiven/Forgotten” is so amplified it crosses out the exclamation marks she sings after every line.

Random Ergs! song aside, Burn Your Fire reminds me of this awkward and inspiring bit of stage banter Julia Holter did when I saw her live last year: “Sometimes,” she said, “in love, you are unsure. You’re hopeful but you’re hesitant.” Olsen’s songs are the moment between hopeful and hesitant; if not hopeless, minutes before it. For all its triumphant, often epic moments (the scorching rock band that makes her hi-five to loneliness, that bit in “White Fire” that sounds like Walking Dead soundtrack bait), it’s hard to call this a landmark record; the songwriting crosses out the imperative and underlines what doesn’t really make sense. I think of the bass notes in “Iota.” They’re so good I want to hold on to them for good, but I can’t. With the word “sometimes” at its side, Burn Your Fire becomes 2014’s biggest, most fascinating puzzle. How am I supposed to feel?