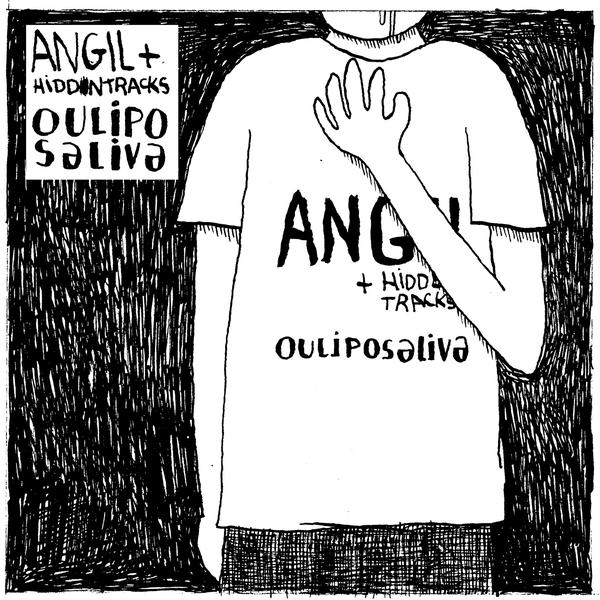 Chemikal Underground strike again, successfully tossing another grenade full of itching powder and retreating while the world squirms and scratches. Watching them shape up and pull rank comes as something of a relief to anyone who’s been following their trail thusfar—for a while back there they were almost in the shit-cart, reeling from the respective demise and departure of both Arab Strap and Mogwai. While a whammy like that must’ve hurt like an uppercut to the family jewels, their recent signings have been working time-and-a-half to put things right; each one plucky, intriguing, and rubbing street cred back into the wounds. Following the Aloha Hawaii EP and last month’s Mt. Wilson Repeater debut, the imprint scores its hat-trick with Ouliposaliva: the entree of Angil and the Hiddentracks, one of the most bizarre/bankable records to air outside of its creators’ Parisian side-streets. It was put out on the We Are Unique sub-label a year ago, and rightly so, as the Angil crew are truly in a world of their own when it comes to their genre technique. If any other artists out there have been secretly combining indie played on wind instruments with acid jazz and rapping, now’s the time to raise an injunction.

To start with, Angil and the Hiddentracks should really be written as “Angil and th Hiddntracks,” as the band have a collective thing against playing any E chords. This isn’t anything to do with fretboard dexterity or a salute to bad times on pills; frontman Mickäel Mottet just happened to invest in a thrift-store piano that’s missing one or two vital keys, and his thirteen accomplices dutifully followed suit. I guess you need to be a composer yourself to detect it, as my attention was more caught on the snazzy mania beating through every capillary in the album’s fifty-two minutes. “In Purdah” lets cellos glide like pelicans over Mottet’s nervous inner monologue (“I am in Purdha / Running puppy-fat out of my body…”), and “You Most (Third Part, As Far As I Know)” is a barbed jazzy farce which morphs rapidly into downright psychosis, with horns that prowl like Inspector Clouseau and drums being banzai’d by his sidekick. I only wish I could hear it on vinyl, just to make sure there isn’t any Pagan backmasking ensconced in the crescendos.

What pegs Ouliposaliva out from the asylum of committed loony musicians is how its arrangements switch from laconic to spry without breaking flow, or worse still feeling like they’re all just more chapters in a standard thirteen-piece anthology. Not that that means the tracks here are thrown together haphazardly. For every bit of wispy improvisation (such as the recurring “Do Not Think” cue that slices the album into three), there’s an equal helping of meat, each piece cured and addictively spicy. Dour trumpets darker than Bellville Rendezvous sketch out the bones of “Narrow Minds,” a tale of a man’s despair at the politics of his shared house and the most obvious candidate for a potential single. Clarinets smooch while loose drums flap like a maddening chaperone, cementing the rhythm that sticks to your brain like a vicious and elaborate prank. It’s a stroke of mischief that shows Flobots up for the pussweeds they are, and waves a red rag that boldly proclaims if you’re going to drink and drive, make sure you’ve got the car with you. “Trying To Fit,” on the other hand, moves into more familiar Chemikal Underground fare, all bleak violins and angry beats that you can’t help but scowl along to. That piano’s back in town too, shedding his remaining keys in anger and more menacing than a punk with a Wasp Injector Knife. Yes, hip-hop really can sound this serious when unplugged.

It would leave an aftertaste as crass as a stink-bomb if it weren’t so awkwardly beautiful, but Ouliposaliva manages to feel consistently cool without making cuts in either style or substance. It’s almost certainly Chemikal Underground’s boldest departure since they gambled on Arab Strap twelve years ago, and makes you wonder if they haven’t hit the casino early to strike a secret deal with the croupier. Of course there are stumbles—those ivory droplets don’t always stir into their goose-step mixers, and some of the more batshit tracks are capable of dissolving relationships (I’m still not allowed to play “Took No Drugs, Had No Drink [It Was All In Our Minds]” in the bedroom after dark)—but if you’re going solo and fancy forcing your neighbours to confront their furthest nooks of their subconscious, here’s all the quaintness you require. The Hiddentracks’ record is the sound of the twee children finally wreaking their revenge.