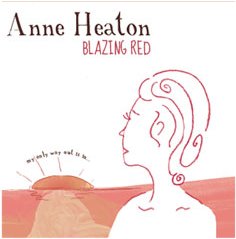 Here’s a singer-songwriter that allows herself to be ordinary at the same time she’s unafraid to find extraordinary moments. The landscape of Anne Heaton’s Blazing Red is the interior of the soul as it weathers the storms and enjoys the sunshine of the everyday, the title itself reminding me of the chromatic existentialism of Bergman’s Cries and Whispers. This is real life as plain chamber drama, the most familiar and yet still deep movements of our pathos rendered into gorgeous song with a keen balance of sentiment, a common ground that singer-songwriters often try to walk too forwardly with their audience, thus alienating those of us who are tired of common ground and having our hands held—who perhaps pine for the more esoteric insights of aesthetes or favor albums that let us in on cultures separated from our own. Heaton circumvents this wariness, though, keeping her details vivid but her constructs abstract just enough to strike resonant chords. She references Peter Gabriel and Tori Amos, which rings true in terms of her overall approach, but the emotive calm of this music reminds me most of the Softies and Rose Melberg.

And while some of the songs here are plain, though always graceful and dignified, there are those that stand out as extraordinary. “Where You Scar Is” is a hushed realization of a past hurt that leaves a void in a present relationship, the music underplaying the somber epiphany of its narrator with a light touch: finger-plucking, a shaker, some keys, and Heaton’s beautiful voice that reaches with clear-eyed resilience for the soft, high notes of the song’s chorus. Heaton sounds comfortable in vulnerability, confident, but not so much as to lose the impact that her words have when scrutinized: “And I know this / That your love lives where you scar is / And I know why / Even when I’m right next to you / I feel lonely sometimes.” Later in the record Heaton’s voice dips a bit uncertainly as she explores her lower register on “Fire Sign”; if anything this lends her performance a quality quite apt to the song’s confession of losing one’s identity in pursuing the love of someone else. The song’s quiet climax comes at the end of its third verse, the loss of self complete: “And I was dreaming your dreams / I was speaking your words / I was screaming your screams…”

There’s really a multitude of things to recommend in Blazing Red: the rather unique concept of “Momma to You,” Heaton assuring a nonexistent child that its day will come once she feels whole enough to be a mother; the lyrical passage amidst the bouncy drift of “Crystallize” where Heaton goes a bit Spencer Krug, talking about putting “it” inside her bones, being pale and crawling, “a ball of hair / a dried bee-hive”; the utterly fitting progression of “Halfway Times Two,” a composition that embodies its title by pausing halfway in to take us only halfway to the full beauty of its final release, a statement built out of nothing but more emphatic piano chords and a falling veil of vocal harmonies. HEM’s Gary Maurer handles the production of Blazing Red deftly, each element clear and unobtrusive and solidly backing the record’s star, Heaton’s voice and the words it carries. Listen, I’m one of those slightly alienated listeners that doesn’t go for singer-songwriter MOR-type shit…but I’m going for this, the best record of its ilk since Feist dropped The Reminder in ’07. If this is MOR music, it’s MOR only in the sense that it’s speeding down the middle of the road, straight into the sinking sun, directly to the blazing red heart of the matter. Real warmth and real light, right there in the intimate midst of all the mundane.