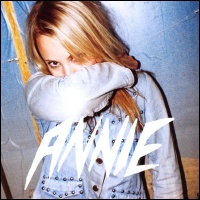 You may remember that earlier this year, I wrote a review of Kylie Minogue’s Body Language. Now, your friends at CokeMachineGlow do hit quite a range of styles, but disco/dance-pop does not tend to be one of them. But I just checked my calendar, and I’m overdue for my semi-annual review of the type of album that indie kids would just fucking despise. If you think “Toxic” is a terrible song just because Britney Spears sings it (though it does tend to be a reliable litmus test), if “pop” rhymes with “crap” for you, turn back now, and keep your narrow-minded ass out of my club. You’d probably just sulk on the side sipping the same sissy drink all night, anyway.

So Annie may not be quite as hot as Kylie. But her album is superior to Body Language on all fronts. It’s a sickeningly catchy collage of club-thumpers and carefully considered emotive (but still somewhat danceable -- do I hear “remix”?) pop tunes. Essentially, if we’re going to take a historical/speculative bent, it embodies the conflicted emotional state of a budding pop-diva: urges for escapism - embodied by her rump-shaking bubblegum dance numbers - bumping heads with tunes intimating a profound underlying sadness over the loss of her love, producer Tore Andreas, who died of a heart defect he was born with.

But all that’s so depressing. And Annie wouldn’t have you be depressed. As she testifies on the album’s paramount hip-shaker, “Chewing Gum,” over a modified deep disco beat and those (to use a phrase coined by Peter Hepburn) heroin handclaps: “I just want to have fun.”

Annie, as it turns out, writes her own songs (booyah, Kylie!). But she also has some sick producers to manage the knobs. Richard X’s production on “Chewing Gum,” is one of the savviest collections of beats, bass slurps and synth bleeps this side of Basement Jaxx. Annie’s lyrical conceits may not strike a particularly literary chord -- comparing boys to bubble gum, which was done better in Enon’s “Disposable Parts” -- but if you’re not doing the robot to “Chewing Gum”’s chorus hook, then you’re at the wrong party.

Production duties are mostly handled in the other tracks by Timo, a former Finnish electrohead for whom Annie DJed in Helsinki. Timo doesn’t possess the innate flair for glitter-flaunt that X so effortlessly nails, but his work is certainly of fine caliber, and his arrangements rarely smack of soullessness. On “Always Too Late” his production approaches sheer genius, coupling swelling bass swoons with wooshing tribal drums, and laying a synthetic string hook over bogeyman synth wavers. Annie fills out the mix with her more-innocent-than-Kylie breathy layered vocal hooks, and despite not being a dancehall-banger, the cool collusion of its individual elements easily makes the track easily one of Anniemal’s best.

Meanwhile, Timo’s dance production on “Me Plus One” rivals X’s work on “Chewing Gum,” as he lays down a fat little synth bass line on funk chords and flying spaceship effects. The beat could’ve been a bit deeper, but it suffices for your ass-moving pleasure. Annie’s rapid airy delivery completes the track’s destiny for dance-classic status. Shimmy, motherfuckers, shimmy.

“Heartbeat” completes the near-flawless initial four (complete) tracks’ cycle, as rising cymbal rushes usher the song into a dance-rock beat on the tail of an addictive simple bass line and organ touches. The song’s swooning, sad melody is the first truly beautiful one on the album, making for an à propos comedown to the shaker-vibe of the album’s first third.

What makes Anniemal such a strong pop effort is its refusal to drop its high standards for production, melody, and hooks. “Helpless for Love,” follows a stuttering synth pattern that wouldn’t have sounded out of place on the Junior Boys’ Last Exit into at least three different hooks, Annie’s tumbling vocal pattern being the most arresting of them, as it mimics her tumble into irresistible love. Winding, Jamiroquai-type bass work underlines the flighty synth patters of Anniemal under a deft set of key-shifting vocal melodies. And underground ripple-creator “Greatest Hit” of 1999, still resting on its Madonna sample, doesn’t escape the track list, and for good reason; its bass and vocal hooks cling to the grey matter like sparkling duct tape.

The one real stumble of the album is “No Easy Love,” whose melody is a tad too evanescent, and whose beat is a tad too R&B to fit the energetic grooves that glue the gluteus maximus to their beats.

And then of course, in the interest of party-pooping holistic analysis, I have to take into account the unfortunate fact of lyrics. Now, Annie isn’t singing such idiotic travesties as “Your disco needs you,” (booyah again, Kylie!). But what little improvement she imports to dance-pop is marginal, marring the magnificence of some of the album’s melodies with such tidbits as “bring out the Anniemal in you,” and “I thought you were so fine.” To be fair, she does balance the scales with some heartfelt honest lyrics that are substantiated by her real life experience; innocent lines like “My best friend / Where are you…Thought I heard your voice calling for me,” and “You are my sun and my moon” resonate unexpectedly strongly when one considers precisely where they’re coming from.

Okay. So the awkward, contemplative silence is over. The ass-shaking is still contagious. The hooks will still stay with your for days. Your girlfriends will play this in the stereo and you will secretly – oh, very secretly – be thankful they did. Or you will play this in your stereo and your boyfriends will give an uncomfortable laugh, like they do when they see two lesbians making out and you’re around – that is, you know that secretly, they love it. How do I know this? Because you’ve actually taken the time, and proved the open mind, to read all the way through and see that, really, pop music, even bubblegum pop, isn’t all irretrievable crap. In fact, I’ll end this review on a sentimental note: far from releasing sub-par, factory produced, mass-feeding dance delusion, Annie has, with some help, crafted a damn fine album, one that would’ve made Tore proud. Aw fuck, now I’m all sniffly. Just -- just play it again.