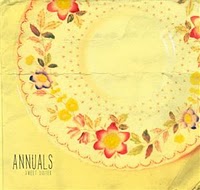 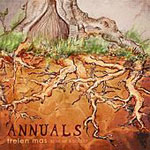 This is a good album despite its faults, but I need to backtrack to explain why, because it’s not just good because the music is good. Please join me a couple of days ago in the staff room, where the rest of us are enjoying Betz/Boogz CLXIII (Topic: Decemberists), when Chet spouted this absolute gem: the band is “calculatedly tapping into the latent Caucasianess of any developing hipster or English student stereotype you can think of. In this one and only case, I mean ‘Caucasianess’ in a bad, self-conscious, culturally imperialist sort of way. I think liberal guilt is often a silly neurosis to plague one’s self with, but the Decemberists are like a liberal guilt reversal of liberal guilt that’s even more silly and annoying.” He’s pinging my subconscious as I listen to the Annuals—the next Arcade-mired band to loosen its hopes and dreams upon us like an avalanche of conflicted endorphins—because the problem (not with the band, but with the culture of hype that surrounds bands of this ilk) is exactly that.

In my very first review for the Glow from way back in January, I accused the Diableros of reducing the complex emotional expression of bands like the Arcade Fire and Broken Social Scene into onerous one-bite cookie-cutter phantasms of emotion; there was, and is, nothing sublime or subtle about the fun-but-navel-gazing You Can’t Break the Strings in Our Olympic Hearts (2005), but neither do I think they should be written off as some bête noire of indie culture. Fun music is just fun music, right? Except in our reception sometimes it isn’t, which happens when we rate a simulacrum—a quick representation—with the same weight as something far more complex, simply because it sounds the same. When an entire culture’s (i.e. all of our) capacity for emotional investment and catharsis gets reduced to cotton candy, it hits the tongue and it’s gone: the Diableros were constantly talking about “us” doing things, asking me if I knew Universal Truths (As Defined By Non-Universal Artists), and basically ignoring that I had any say in the matter.

The difference is that the great bands of this Canadian-led throw-the-Bowie-and-the-gravitas-on-the-Springsteen-fire music don’t do that shit. Funeral (2004),

But Chet’s also right about what happens when the guilt itself gets reframed, or worse, ignored. It’s not an end to the Arcade Fire party to admit that this music is, for a whole slew of reasons, exclusionary where class creates chasms and gulfs. But the dearth of albums to live up to the promise of Funeral, despite the proliferation of groups hailed as the next Arcade Fire, that sound like the Arcade Fire, suggests that so many bands just don’t get what privilege means. Twee, ragged, emotional, influenced by Morrisey or Bowie, my problem is that a slew of young bands have latched on to the style of this music, but—whether it’s because they’re young, or profit-minded, or amateurs—not the corollary and critical self-analysis that makes it so wonderful and complicated and thought-provoking to wade through. They’ve bought the right jeans to fit in, but clothing doesn’t actually come with the knowledge of how to wear it, and the Butlers’ powerful and ragged intimacy gets reduced to nervous tics and adolescent howls. That party is a drag; it’s overwhelmingly young middle class people snapping cigarettes they “only smoke socially” while yammering on about their quarter-life crises as if that means anything beyond “I’m done with university, and I don’t want Ikea furniture anymore.” Even worse, I’m From Barcelona is probably playing on the stereo.

It may seem like I’m making a big deal out of a relatively simply issue—that good lyrics are better than reductive lyrics—but there seems to be a disconnect between that statement and what follows: that the former makes music worth listening to in the first place, while the latter doesn’t. And this distinction does matter, because if we simply accept the sound in lieu of the political depth, then the complex and internal emotional struggles like those of the Butlers get replaced with severely lessened and often glib rehearsals of straight white middle class (and usually male) Whatevers. The realm of indie is already white and male and straight and middle class enough, so let’s not let cherubic, inexperienced newcomers encode a lack of liberal guilt as the directive of our indie culture. We have a responsibility as an audience to demand better, and we can’t suspend habeus corpus just because it’s art, or it’s fun; musicians should be made to account for why they try to arrest us, mind and body. How the nadir of this new movement, I’m From Barcelona, can be embraced at all astounds me. I don’t want to be included in a face-value rendering of the perils of waking up late—even divorced from all the political issues, that’s the stupidest problem ever. Set your alarm clock, dude, and get over it. Or at least make it mean something, because the glib, detached, and pose-ish way you’re delivering the lines make me want to puke. In short: music is music, but music that makes us confront the complicated social constructions and privileges that pockmark our identities while still celebrating what is awesome and tragic about life? Music that doesn’t ignore or soothe liberal guilt? That’s the shit, right there. Because it’s tough, it’s challenging, but so is life, and earnest shouldn’t be the new dance punk.

So, cough, that’s why Be He Me is great. The Annuals’ composer, Adam Baker, despite being young, is unfolding incredibly personal angst, slowly pulling apart what’s beautiful about his songs like perfectly constructed paper birds. And those songs aren’t proscriptions or prescriptions; they aren’t lazily written with feel-good empty promises; even the closing “We’ll have it all” is only mouthed by a voice about to drown. Death and love square off throughout; life (i.e. accepting proscribed styles of living) ends in loneliness (“Brother,” where the character has “grown bold, and lonely”). Parents watch children die (“Father”), Baker says he feels like dying or that he will die in almost every song, the album is dedicated to the dead. Throughout, the fragility of privilege is fore-grounded, and within this emotional wash, bullshit I’m From Barcelona depictions of being late for work (or, more importantly, the glib, detached, and pose-ish way they’re delivered) would be utterly consumed. Utterly.

Because despite the emotional heft, he’s actually dealing very mundane events: telling your mom your laundry is clean (“Dry Clothes”) and that you’re dressing for winter (“Mama”), drug use and paying bills (“Carry Around”), a newborn animal dying (“Bleary-Eyed”). But he drills directly to the emotional core of these events, and when he proclaims, at the end of “The Bull, and the Goat,” that he’s “so young / I know / That’s why I feel where I won’t go,” he’s earned it, because it isn’t just idle speculation—he’s actually scared. And, I mean, he is young, and his lyrics aren’t perfect, or experienced, but where the meaning falters he makes up for it with incredible melodic deliveries. “Sway,” all elegiac and wild, slow, soaring angst underpinned by rollicking percussion, manages to make a line like “That kitten on the patio can’t get to me where I lay” sound absolutely cathartic (not to mention the fact that the brilliant drifting delivery emphasizes the space between the singer and the cat). The song ends the album on a note as powerful as the Figurine’s “Release Me on the Floor,” but the lyrical matter is so much simpler, and yet all the more powerful for it, because over the gospel trace we just get a dude telling us he loves everything while he’s doing absolutely nothing, taking a nap (and possibly drowning). Which, given how conflicted the eleven previous tracks are, makes for a comfortable end to a haggard journey (and one, I might add, replete with a Tony Banks-ish synth solo, continuing 2006’s obsession with Genesis).

Take “Bleary-Eyed,” where Blue Oyster Cult harmonies play out over country guitar licks and a frantic percussion set delivered by Nick Radford and Zach Oden. If the song is about dying baby animals, the tone doesn’t suggest it—we are celebrating death, and drinking, and writing, and crying, and Baker’s teary eyes are reflected in the slowly opening eyes of the baby (animal) dying on his kitchen floor; two revelations, he from experience, she from experiencing for the first time, and then the end. Or “Complete or Completing,” where the band does Beach Boys harmonies over woodblocks, Mike Robinson and Kenny Florence adding their vocals to Baker and Radford; the song is about partying, but its stuttering delivery makes it hard to party to, which is hilarious. Or the programming-enhanced “Carry Around,” for which Anna Spence’s synths accentuate chemical-enhanced themes; the song features more soaring vocal harmonies and some sick drumming by Radford as Baker works his way through one of the poppiest melodies this year. Baker asks, “But what does meaning mend in the end[?]”; he’s right, insofar as meaning rarely repairs our beliefs, and drugs are neither escape nor solution—they’re just fun. Then there is “Brother,” the beautiful lead single which works its way through leaving the family home with beautiful string accompaniment and a thunderous distortion break that is only the first of many surprises on the album. In fact, given all of the diverse arrangements and tones, the only song I don’t love here is “Chase You Off,” where’s Bakers ability to sound like Sting doesn’t solve the groaning and directionless pull of the slow parts; the repeated phrase “at least I found my sanity” is too vague to carry much emotional weight.

My only complaint, and what keeps this from being a top ten album for me, is the overuse of effects and noises throughout. Samples and programming are fine, of course, but aside from some lyrical flubs, but the arrangements are too giddy, with random voice fragments and noises inserted seemingly at random. We don’t really need the crickets or the rain noises that bookend “Brother” to make it a better song, and the recorded speech just sounds tacked on. Similarly, “Dry Clothes” features what I can only describe as circus whistles which don’t really add much verve. Ghostly speech samples speak to a fear of letting the music stand on its own, and the Annuals have a lot of promise; I don’t want them to get all Fiery Furnaces in the studio. Which isn’t to say that the willingness to take risks is a bad thing—the piano/woodblock work of “Complete, Or Completing,” the acoustic wall of “Bleary-Eyed,” the calypso flair of “The Bull, and the Goat,” and the overwhelming warmth of “Sway” are all the product of the same impulse, I’m sure. And anyway, the trigger-happy samples are just a small way Baker’s overextending himself within an album of fabulously conceived and executed music, full of conflict, and therefore full of vitality. This is beautiful music wracked with conflict, and this is the stuff we should be holding onto for dear life, because this is exactly what our lives are actually like.