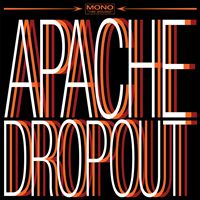 Apache Dropout is fast and to the point; the totally bitching self-titled, debut album by this garage/art trio from Bloomington, Indiana is mobilized on the listener with all the subtlety of, well, a very unsubtle garage rock band.

A whoop of deep-fried amplifier fuzz and an ungodly scream, a couple seconds of beautifully recorded chaos and we’re in: opener “I’m So Glad” enters on a galloping rhythm guitar-line that you’ve heard hundreds of times before, and you won’t be at all surprised when Sonny Alexandre (the band’s frontman, axe-wielder) rips into a solo that leaks feedback all over the track, like an haemorrhage after an easy bruise. It’s predictable that this would happen around a minute in, just like it’s predictable that Nathan Warrick’s diligent bass speeds up to double-time during the chorus, just like it’s predictable how Seth Mahern knows precisely when to identify an unsightly louse dropping on his first cymbal and then proceed to beat the living shit out it (louse-murder occurs after every single chorus, right on time, or one sloppily-practiced beat after). This band is called Apache Dropout and they play the best psych-garage this side of the Oblivians. This album won’t at all surprise you, or compel your behind to leave brown specks in the pair of underwear you specifically reserve for albums with “aesthetically challenging soundscapes about socially deprived individuals with existential AIDS, who nonetheless remain positive for life.” This is not the album for that particular pair of underwear.

Maybe you’ve forgotten how infectious or soulfully disfiguring this type of rock music can be. The past few years of blog-buzz survivors and trend-hoppers have done little, at least, for my personal hope when I read lines like “The guitar spreads to your bones and viscera like a neonatal infection, because it’s so…child-like,” or “The burning, raw sensation the band induces in all four-quarters of its audience is also associated with a deep love of real rock music.” I read lines like that now and am dismayed; then I sip a bitter latte and yawn peacably. After a while I remember that, in fact, I’ve written a hullabaloo of lines like this myself, which compels me to throw a tall latte over my blinkered laptop screen. Then I see what’s actually loading on that now latte-smeared screen: it’s a PR release for a blog-buzz band and word is they’re real, “like the topical steroid preparation the bland fungus of your music library so tenderly calls for.” And the band’s name is a pull from that well-known musical authority, the DSM-IV. (What section of the Mental Health Act will you name your band after?) And I decide to throw another latte at the screen. I book an appointment with a professional therapist.

I’m not a bitter person at heart. “The glut that’s been the lo-fi resurgence has, like, totally jaundiced me over the past few years, man” is what I might tell this therapist, and he/she will peer at me with a knowing smile, and we’ll bullshit back and forth over a couple of weeks about which Microphones record I loved the best, or what Tom Petty album was ultrasonically passed via amniotic wave-forms into my mother’s womb when I was but a lowly foetus. That sort of thing. And it won’t help because—cliché alert—only good ol’ rock music is the best therapy, and almost one hundred percent of music that identifies itself as roots-rock or garage-punk-blues sucks in increasingly biblical fashions nowadays. Seriously. Have you heard what that guy from the Von Blondies is doing with himself now? More importantly, because let’s fucking talk about this record I’m reviewing already: have you heard Apache Dropout?

This album is the real deal. Recorded in mono at the band’s own Magnetic South studio, it’s a record that’s been lovingly put to tape. There’s nothing remotely haphazard about the brute-force these guys lay down across eleven tracks that filter soul-stomp and deranged, drug-addled beat-speak through a film of three-minute songs that retain their mystery even as they drone into the aether. It’s an extraordinary tension, and one they exploit across the album to varying degrees. Material like “Teenager” maxes up the melodies, but the band’s predilection for jamming means it’s endlessly re-playable—the little curlicues of noise that surround the mix, the guitar solo that almost takes flight. Like “Nothing in my Hand,” which introduces an obscured horn section, the material is eminently catchy but teeters on a line where part of the catchiness isn’t simply the melody, but the way it’s been recorded and mixed, and the band’s cool, unfettered approach to the material. There’s no one element that makes a song like the future-standard that is “Sam Philipps Rising” so brilliant. Rather it’s a confluence of everything that’s gone into the music—down to the personalities of the players, stuff that would render covering this stuff absolutely moot.

Apache Dropout don’t treat their own material conservatively; they subvert it mid-song (the deliberate breaks in the mix of “Sam Philipps Rising”), introduce a Beatles-banger (“Sylvia”) right in the middle of a run of heavy blues numbers because it sounds right. The whole thing is glowing with rich production details, the likes of which haven’t been heard in music this primal—music, in the past few years, better known either for noisy bleeds in the mix or unimaginative straight-takes on the standards. Apache Dropout, hopefully, calls for a new paradigm shift. I’ve not heard a garage record this balls-out and earnest in a long while.