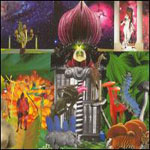 This review probably should begin with a discussion of the Apples in Stereo's incredible back catalogue (followed by a discussion of how this album is the long-awaited and glorious follow-up to their largely disappointing last release), or the long and weird career of Robert Schneider (a man who's been a part of all kinds of fabulous records, all kinds of lousy ones, and about a billion side-projects), or even the history of the Elephant 6 collective (responsible for some of the most important records of the last 15 years, from In the Aeroplane Over the Sea [1998] to The Coast is Never Clear [2001]). You know, some context.

But no. This review can only begin with Pythagoras. (Yes, seriously.) Pythagoras and Robert Schneider's seemingly endless arrogance.

I mean, the dude has called out Pythagoras. Take a look at that tracklisting on the left. "Non-Pythagorean Composition" numbers 1 and 3? (Don't worry, #2 is a bonus track on the CD.) Schneider outlines, in the bonus materials for this disc, how he has developed a new logarithmic scale that deviates from the traditional 12-tone equal tempered scale. The 12-tone equal tempered scale is a modified version of an idea generally credited to Pythagoras, wherein a note with frequency 2x is one octave higher than a note with frequency x, a ratio of 2:1 (a ratio of 3:2 is a fifth, and 4:5 a major third). The 2:1 ratio for Schneider's new octave remains intact, though the other 10 notes in his scale increase in frequency in a logarithmic, rather than linear, way. Here is a chart:

The thing about the new scale is not how revolutionary it is (the jury is still very much out on that one), but how excited Robert is about it. In the bonus materials one can find not only this nifty chart, but also WAV files for creating your very own Non-Pythagorean Compositions. Yet, the 12-tone equal tempered scale itself is technically "non-Pythagorean," since the Pythagorean scale was based on perfect fifths and was replaced by increasingly more "even" scales in the West since, oh, the Renaissance. Also, Schneider only uses the scale three times on the album, for a total of about 79 seconds. This is the extent of the self-indulgence of this record. And this is precisely what makes it so fantastic.

Because Pythagoras was also the Wizard of Oz. A fan of the acousmatic voice (that which could be heard and not seen), Pythagoras forced his students to listen to him speak from behind a curtain for 5 years before being able to see him. Scholar Mladen Dolar, who shares this anecdote in his book A Voice and Nothing More, then goes on to speculate that the effect of finally seeing this voice must have been a monumental let down; pulling back the curtain reveals only an average guy. The excitement is in the words, just like on this album the excitement is in the sounds. At the end of the day it doesn't really matter that the man behind the curtain is small, or weak, or self-indulgent, or downright bizarre -- what matters is that for a few hours we got to play around in his world.

Robert Schneider is the wizard at work here. And when you look close enough you are forced to confront monumental self-indulgence and a bloated album -- this alone will push many people away, and I know that. But for those who stick around, you will be rewarded with rich melodies, creative arrangements, and downright fun. The album kicks off with "Can You Feel It," which opens with a non-Pythagorean chord and then kicks into 4 minutes of guitar-driven power-pop. Schneider wails lines like "Turn up your stereo," and you should; he sings "It makes you feel so good," and it does. It's a cheesy song, no way around it, but it has the right beat, the right guitar solo, the right breakdown, and a chorus of voices that compliment Schneider's most "rock-star" vocalization yet. It's a caricature of a song, ending with studio clapping and applause, but rather than marking out the territory that the album will follow, it marks a point of departure for the quirky pop that will mark the album's essentially perfect second half.

The album's first section is filled with pretty straightforward Oasis-style pop anthems, exemplified in "Energy." The album's weak spot is certainly in the lyrics, and this song is representative: "The world is full of energy / and there's a lot inside of you / and a lot inside of me." Yet the music and Schneider's arrangements mark some of his best work, especially on this track where we get acoustic strumming, electric noodling, synthesized bells, Yoshimi-esque robot sound effects, and hand-claps rounding out the mix, creating a full and fantastic sound. Bryce Goggin's hand is all over this, marking the first time that Schneider has brought someone in to help with production duties (check out this video just for the "Range Life" section). Schneider says he was looking for a sound like a Queen album, and he certainly got it.

New Magnetic Wonder's high points are in its more quirky and musically ambitious moments, which really begin with “Sun is Out.” Its first few seconds are strikingly lo-fi, only to be layered with flute, tambourine, shakers, another chorus of singers, and some more spoken audio from the studio in the middle of the song. Ironically, one of the most audible voices asks, simply, "What are all these overdubs on here?" It's a dorky moment of self-reflexivity that soon negates itself with the "Hey Jude" refrain that brings the song to a close. "7 Stars" follows close behind, the album's shiny high point. The verses are all about cosmic bodies and unrequited love, and the chorus is only made stronger by a slavish devotion to the vocoder. It's distorted and lovesick and beautiful.

The "Beautiful Machine" song cycle is another standout, a 7-mintue-plus suite that keeps the album focused and ambitious even as we move through the daunting tracklist (though 11 of the album's 24 tracks are "link tracks" of around a minute or less). You can certainly feel the influence of Jeff Mangum here (he plays drums and does backing vocals on a few tracks) in the dramatic structure and length of the piece. It moves seamlessly through its sections, which take turns being acoustic reflections and synthesized explosions. It's also one of Schneider's best songwriting efforts, and he croons lines like "We will be forgotten when we're gone" with a true egomaniac's sense of regret.

By the time New Magnetic Wonder flutters to its electronic non-Pythagorean conclusion, we are left with an undeniably catchy, fantastically well-produced piece of studio trickery that feeds the sense of self-importance that its creator seems to thrive on. But that is pulling back the curtain a bit too far; I'll instead relish in the smoke and mirrors of a guy who just might still be in his prime.