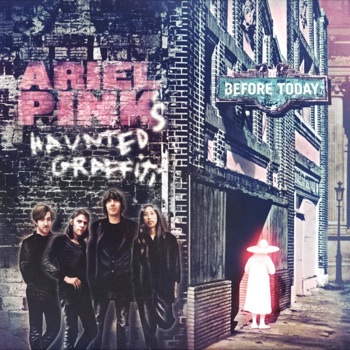 After the promotional equivalent of a creepy old flame confidently hitting on us in a local bar, Before Today sounds like an ambivalent morning after. While former bandmate Christopher Owens sells his own retro-minded, soft-recorded pop through a seemingly biological lack of pretense, Ariel Pink tells jokes so thoroughly and seriously executed that they end up the same way: like uncomfortably naked windows into their creator’s psyche. And for all the promises of change, Pink’s belated 4AD debut is proof, more than anything, that real devotion to an idiosyncratic personal vision precludes meaningful change. The songs may fade into each other, the singles may sound clean, but Ariel Pink will always be himself, will always be constantly reworking old songs, radio echo as self-defining as Kevin Shields’s guitar army. This will be no conventional album; it will have no studio sound (even if said album is produced by Quincy Jones’ grandson). One’s relationship with Pink will always be stuck in the same sadomasochistic patterns, no matter how much he’s changed. As he says in “Round and Round,” “It’s always the same as always.”

So, while he may be fundamentally un-reconstructed, Pink’s clearly a more polished revisionist, more polished than he’s ever been, and while it may not be conventionally recorded, Before Today still feels punchily archetypal. Haunted Graffiti has become a full band, for one, giving everything a sentiment and aura distinctively garage rock. There aren’t any songs with the glam swagger of 2009’s “Flashback,” but “Beverly Kills” and “Evolution’s A Lie” both receive sharp-edged facelifts, transformed into paranoid, dirty-L.A. stomps. Songs fade into each other (like when the latter becomes “Revolution’s A Lie,” with synth swirls and gunshots added to the krautrock), the album begins with the “Back in the U.S.S.R.” airplane noise, there are copter-chase effects, one can feel the heat of the smoke: “Ariel Pink” is too much of a total persona for the songwriter to get more or less “real,” but there’s something both overt and conceptually insular in the way he’s making his bid for (hee) mainstream indie. It’s this thematic feinting that provides the real new narrative here, and I’m not sure if it’s promising or depressing.

As obscure as his songs can get, the one sure route through Pink’s back catalog is to rely on each album as something of a subconscious blanket, say, a collection of music imbued through draping it over and around oneself and sleepily letting things bleed in. Take albums like the definitive Doldrums (2004) or House Arrest (2005), composed of the intangible, dubiously genre-marked bedroom stuff that’s easy to make but hard to excel at, to get what I mean. Here, though, we have full-on songs, and while they’re all, y’know, pretty good, it’s a choice at odds with the aesthetic Pink’s been building for years. Outside their context as stellar singles, “Round and Round” and “Can’t Hear My Eyes” are jarring, jerking the album out of its relative slumber into a worked-over, workmanlike almost-focus.

A reliance on hooks and explicitly emphasized structure prohibits hazier enjoyment,yet the lyrics themselves are murkier then ever, disconnected snippets and rambles. The curdled joke and creeping bass of the new “Menopause Man,” for example, underlines a new darkness to Pink’s gender-bending, a turn from the Morrissey-type pining of “For Kate I Wait” into something less emotional, more just plain eager to shock: “Make me menstrual / Make me gay”. While Pink seems to know more what he wants in terms of musical direction—a harder, more visceral sound; serious effects instead of weird asides—the simple pleasures of “Hardcore Pops Are Fun” or “Getting High In The Morning” have vanished. Over the surf-y, careening “Bright Lit Blue Skies,” he sings, “My voice is quiet / But my thoughts are loud / Bright lit blue skies / You’re full of lies.” The feeling is scattered, suspicious, washed out. Nothing he hasn’t tried before, but even more noticeable as he tries to transcend it.

What this works toward I have no idea. The lonely L.A. Sound synth/guitar combo of “Can’t Hear My Eyes” or the Japan c. Tin Drum (1981) instrumental “Reminiscences” do bring Ariel Pink’s shtick to a new level, that is: a kind of technical sobriety that helps contextualize the “she loves you yeah!” parts of “L’estat.” But many of the brand new songs on Before Today come off like a slight letdown for Pink: strong retro takes for anyone else, but lacking the unity and soulfulness of his best stuff. This all averages out to something about the same as always, a song like “Fright Night” par for the course, bringing in a little spooky MJ, some B-52s (“knock, knock on the door!”), but ultimately all Pink, a lonely world of warm keyboards and weird vocals, a dark joke from a funny but sad bastard. Incidentally atmospheric, newly outgoing, mostly just some more idiosyncratic self-expression; eat shit, indie mainstream.