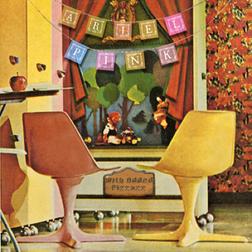 This sounds like it doesn’t exist. Added Pizzazz is to Tower of Power’s horn section what Ariel Pink is to 70s soft rock—a decrepit, post-modern basement version—and together they sound like they’re one-upping each other, at least in terms of bored moldiness, by which I mean: they sound like moss without a rolling stone to grow on. In the context of Before Today (2010), which donates the mumbly fixed-gear groove “Hot Body Rub,” Added Pizzazz’s added pizzazz was some appropriately dirty shine on some rough pop nuggets, many of which were making their umpteenth appearance on a Haunted Grafitti record. Here, though, it’s just dirty shine, and as much as I appreciate the novelty of it, I can’t help but feel gross at its conclusion. I guess you could call extended horn meditations, like “19” or “Vapor Trailer,” “ambient,” but who wants to get transported to the Mexican fast-food joint down the street, the one with neither health inspection nor W-2 forms? It may be a matter of authenticity, but the tortilla shells are grainy and the beans just leave one hungry and gassy.

Centerpiece “In The Heat Of The Night” is probably the only song in the world that both 1) sounds like nothing but alternating outros and fade-outs and 2) sounds less like an outro or a fade-out than everything else on the record. If “Round and Round” was Ariel Pink trying to impress everyone with how many choruses he can string together, this is (improbably) the cred-grab to compensate for something that barely even compromised his aesthetic in the first place. In other words: just a dick move to prove that now he can pay a horn section to do what he used to have to beatbox his way through (i.e., the noisy ten-minute interlude). It’s like if, after finally cutting out the skits on Sir Luscious Left Foot (2010), Big Boi commissioned Fonzworth Bentley to do an all-bad jokes EP with him, constantly coming to the verge of rapping but never quite getting there. I’m kind of nostalgic for rap skits, but not that nostalgic. Boi, stop.

At least every track demonstrates some sort of variety. There’s the aforementioned pop-song-as-constant-outro conceptual bit (“In The Heat Of The Night”), the snippet of a background-jazz horn solo (“Vapor Trailer”), the regurgitated horn groove (“Hot Body Rub”), the Holy Mountain-type, cinematic instrumental complete with ringing metal bowls (“19”), and the busy vibraphone fiesta (“I M NN7”). There you go: the whole EP in a sentence.

I’m not sure what context Ariel Pink With Added Pizzazz could actually inhabit well—an extremely short makeout session with an unwashed stranger you met at an Abe Vigoda show?—but now it exists and there’s no making it unexist. Ariel Pink completists and 2010 blog-buzz-surfers will forever have to contend with this awkward, singular masterpiece of unique uselessness, the first actually tossed-off thing Ariel Pink has made in a long career of making things that try really hard to sound tossed-off. Congratulations?