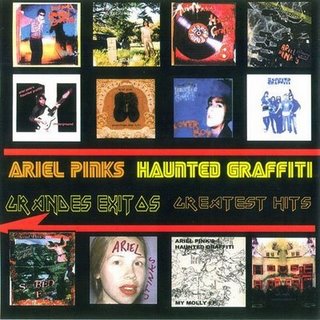 Right now is the perfect moment to revisit the Ariel Pink canon, when inferior low fidelity is on the ascent and post-Obama earnesty at an apex, both primed to get their comeuppance—right?! Despite the rep that he may get from many quarters, the overwhelming and cult-validating thing about this, Pink’s cheekily self-released “greatest hits,” is the improbable, one-after-another parade of silly, melancholic, Lou Reed-cool, unheard hits. With the buzz, dissonance, and subsequent confusion over his surprise alliance with Animal Collective’s previously in-house Paw Tracks label fading, it’s easier to hear the dissimilarities that nonetheless proved to be so arresting for Panda, Avey, and co. So, yes, accessible: this album essentially functions as a shortcut around the prickly exterior that has shielded Pink from wide acceptance, and that makes it both unique even among the weirdo circles Pink runs in and sure to piss off the bearded record store workers who cling to artists like him in order to try and get back to that high school feeling of Your Own Personal Band.

Ever careful about an all-important mythology, Pink usually makes sure to pad out even his most accessible albums with at least one ten-minute, downbeat “mood enhancer” or aggressively brown (to steal a Ween-ism) song that functions kind of like the cat-drowning scene in Harmony Korine’s Gummo—either you’re in it for the long haul or you’ll never be able to return. Like Korine, a criticism often lobbed at Pink is that he hides behind a disingenuous veneer of “outsider art,” which is in Pink’s case the intentionally experimental ambience of his most uncompromising songs and the scene-setting wet static of his best. But better than any mixtape or commentary track, the tour-only Grandes Exitos is a perfect tool to help the exegesis of such a defiantly singular auteur. Stripped of sound experiments, it offers twenty-three songs all firmly grounded in melodic pop tradition. Thanks to this charitable setup, his effects-heavy radio transmission sound becomes no more an acquired taste than his ‘80s drums—new listeners are dropped into Pink’s world without any barriers or borders or further complications. This allows a panoramic view of densely layered pop songs, effortless in attitude if not in craft, capturing so well the original glee of a three-minute, paltry but defiant, chord combination that you feel a little disgusting about listening to it, like there’s too much sugar or one too many choruses. And then, in the best of his music, this kind of guilty pleasure—the iconoclast efficiently, if meekly, embracing the conventional—rubs directly against a polar opposite, like the reverb-heavy, gearhead low fidelity and beatboxing, or the weird asides and the retro nods. (There are more than two poles here.)

All that, hugging and holding hands and ramming into one another, creates a certain kind of magic, and not one with easy referents; it could be said he’s not hiding behind anything, or that he isn’t good despite anything. As the most recent and conventionally recorded tracks on Grandes Exitos (the A/B side set “Can’t Hear My Eyes” and “Evolution Is A Lie”) prove, his confidence doesn’t come from vocal layers or fuzz; instead these methods and aesthetic tropes channel that confidence purely, almost innocently, making descendants like Times New Viking or Tickley Feather sound like kids fucking around with a boombox.

The album starts off with the garage-rock raver “Jules Lost His Jewels,” from 2005’s Worn Copy, replete with bandleader whoops, whistling and lead guitar, simultaneously made kookier and more classic sounding through the impressionistic low fidelity. Its self-consciously fun Hollywood inanity leads directly into Doldrums‘ (2004) “For Kate I Wait,” a synth-washed inner dialogue whose “no, she’s never coming back to you” rebuffs to otherwise hopeful lyrics are a gutpunch of heartbreak which is only made more intense by the gauzy and bittersweet sound quality. From there, the album explores Pink’s best-executed variations on these themes, ranging from the maddeningly bouncy “Are You Gonna Look After My Boys?” off of 2007’s scattershot Scared Famous (and whose mysterious invocation calls to mind Tim & Eric’s kid-music groupie, deadbeat moms) to “Life in L.A.,” another track from Worn Copy that takes the Hollywood theme into more subdued, alienated territory. Oddly, one of the least interesting numbers is his cover of the Smiths’ “The Night Has Opened My Eyes,” whose downbeat crooning isn’t powerful enough to withstand his stylistic tics.

The best songs manage to combine the two threads of bloated melodrama and DIY risk-taking somehow, particularly the JAMC-reverb of “She’s Gone,” or “The Drummer”—whose title hepcat’s story is told over melancholic synths and appropriately pitter-pattery beatbox—not to mention all of the tracks from the well-represented House Arrest. There are a few questionable inclusions and exclusions: the Wavves-ily one-note “My Molly” and “The Bottom” could have been swapped out for the jangly statement of purpose “Hardcore Pops Are Fun” and the aquatically nostalgic “Let’s Build A Campfire There,” even if that would over-represent his Paw Tracks releases in lieu of other, lower-quality tape reissues on smaller labels. But for the most part, the album doesn’t let up, and along with interesting Exitos-only highlights (like “Can’t Hear My Eyes” and a version of “Spires In The Snow” stripped of the characteristic fuzz), the imaginative variety and depth here are convincing reasons enough to listen to Pink on his own terms, to take this as a gray flag, go back, and dig in. And perhaps that’s all he asks.

The majority of these songs may be from cassette recording projects lost to time, but what matters is the way that they wind from sad-sack to rave-up, pure jokiness to expressions of big city loneliness, all in an absolutely distinct voice. Through Pink’s lens of detached perceptivity and ever-evolving palette of ‘60s, ‘70s and ‘80s multitrack pop hymnody, this is a complete and arresting thing unto itself, and all the more important as it gains converts and influence. His cult is assured, but perhaps this is the time for an oeuvre of such depth and quality to get the wider attention it deserves.