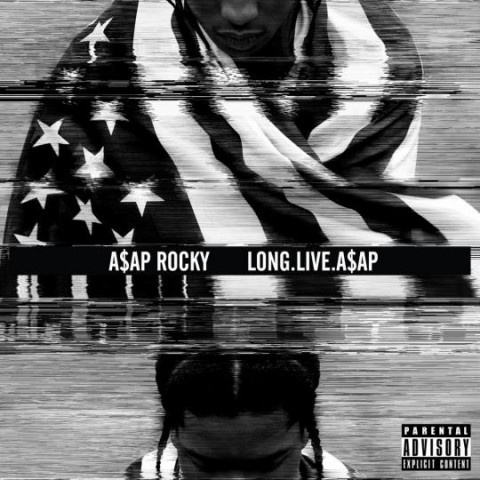 Long live the overwrought rap album intro. That crucial opening track has been, since time immemorial, the home for cinematic skits, for call-outs to the haters, for profane shouts to the wilderness and the ether that the star of the album is not what you’ve designed him to be, that in fact the natural rules of death and grief and humiliation do not now apply to him nor have they ever, and that he has come to take what is rightfully his, which is the game and sex and money and the world and immortality. It’s a clarion call to himself, and it’s right and just that it is. Twenty-two-year-old A$AP Rocky, however, does something strange in his first album. He lets the wilderness talk first. He starts his debut album off with twenty-six seconds of “Riders on the Storm”-worthy rain and wind sounds, which is usually the go sign of some biblical, King Lear type shit about to go down. But when Rocky comes in with his voice pitched down, it’s less a symbol of demonic power and more a baller shoulder shrug. We’re on a dark night of the soul? You think I haven’t seen these before, man? “I thought I’d probably die in prison,” the real Rocky spits, as the beat immediately slams behind him.

Long. Live. A$AP was released almost a month ago, and leaked about two. It’s taken me this long to let the honeymoon wane and gain some critical distance on it. I spent the first month trying to figure out how to crawl inside of that snare drum sound on the title track. The hell with merely describing its hollowed out, heavily echoed perfection as “cool.” The hell with saying that the song’s chorus, where the drum folds in on itself as if Rocky had grabbed it like a plush stress ball, is “a subtle and yet stunning change in the song’s dynamic pulse.” There are any number of moves, subtle and grand, behind the boards and in front of the mic, that the reviewer can break down like math, till the album sounds as exciting as math. I know how to do that. I don’t know how to recreate that sensation these sounds give me, though—that feeling that this snare drum has somehow captured a big bang, like all the air is sucked out of space in the nanosecond before it hits and all of space scatters around its massive epicenter, all to repeated again. All I can tell you that this is the kind of record that delivers those thrills repeatedly.

And all of that for the first song, presently a single, presently a gift to the world that doesn’t need me to describe it. Nor did it need to wait for me to get “Fuckin’ Problems” out of my system, as the thing was all over radio this winter and I could have just waited to listen to it like a gentleman. I liked “Fuckin’ Problems” so much that it, like, bothered me. I have no problem watching Kendrick Lamar and Rocky claim the radio with a too-obvious beat; but to justify 2 Chainz’s existence by giving him one of the all-time hooks, and then have Drake murder his verse? This song, on paper, is filled with things I completely hate. I have now memorized an entire verse for the first time since high school, and it’s by motherfucking Drake. Last summer’s “Goldie” is the better radio-saturated banger, a sanded down, candy-glossed take on his druggy “Peso” that’s filled with change-ups, sudden stops, and that famously screwed up vocal. Watching that song take over wasn’t so much seeing Rocky water his sound down as it was watching a great seduction, as that screwed hook was so great one even noticed it knocked out all of the bass.

The thing with the bangers—even the ill-considered Skrillex production “Wild for the Night,” which still isn’t truly terrible until and except for the moment when the DJ’s air-siren hook takes front and center as a call-and-response to Rocky’s chorus—is that they don’t sound out of place on the album. Credited as executive producer, Rocky takes the role seriously. He chooses his producers and collaborators with precision, finding even more languid, rubbery, and airy beats than 2010’s excellent Live.Love.A$AP. Clams Casino, the mastermind behind much of the tape’s success, only contributes two beats here, but they speak loudest. “LVL” sounds like a broken Nintendo game, synth pads cascading in gentle waves while A$AP talks about beheading people, and “Hell” does the incredible feat of making Santigold sound awesome and dangerous. Rocky himself takes the influence on the album-closing “Suddenly,” which takes a Cytations’ sample and turns it into a churning, grinding leitmotif, utilizing all the terror implicit in the word “sudden” while inverting it into an inexorable thundercloud over the horizon. There’s not even a chorus.

It’s an exhilarating listen, even if all of this dread seems to be in the name of dread only. Rocky and his team emphasize feeling (numb feelings or ecstatic ones) over lyrical content; rhythm and texture over melody and structure. This leads to the curious feeling that the man makes expertly heavy and threatening music without, himself, really being all that heavy and terrifying. This is the nugget of the slim case against Rocky the MC: he doesn’t have his own personality, being instead a gifted mimic. Or, as one good friend put it, “have you ever noticed that usually the least interesting thing about A$AP Rocky song is Rocky himself?” Truly, he could disappear from his biggest single (“Fuckin’ Problems”) and it would stand on its own, but I doubt that the song could have really been made without him. The griminess of these songs strongly recalls early Wu-Tang, except that on Long.Live.A$AP he’s every member of the Wu-Tang Clan. He simply has a vision and follows it—auteur rap. A$AP Rocky exists more like a brandable record label like eighties Sub Pop or sixties Motown: not just great, but great in a characteristic way that can be reduced to a noun, like a brand does.

There’s a line in “Suddenly” that gets to the heart of it, after a particularly wrenching portrait of his early life in Harlem. “Don’t view me as a conscious cat this ain’t no conscious rap / Fuck your conscious crap, my mac will push your conscience back.” Rocky exists only to provide that drug rush, and he makes no apologies for it, having paid his dues in the projects and not feeling the need to prove his hard core bonafides. In a way, that’s the troubling thing in his music: the reality of the streets tried to mold him into a coffin, and he responds by becoming malleable enough to defy definition. There’s a reason he scoffs, and does only that, at the gathering storm in the album’s opening minutes. He’s been through rougher scrapes than this and forgot more than he can teach us. He’s beaten New York City, why can’t he beat mortality? Of course he’ll live forever. It’s a foolish assumption that’s the prerogative of the young, and it fuels, as it always does, truly indelible pop music.