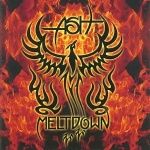 It’s no coincidence that both Meltdown and Ash’s last two records have had late May release dates. Ash are the quintessential summertime power pop band, and judging by the frequency with which they use the word “summer” in their songs, they seem fully aware of this. Like Fountains Of Wayne’s Adam Schlesinger, or vintage Rivers Cuomo, Ash frontman Tim Wheeler is basically incapable of writing anything other than singles. You get the feeling that his choruses are written before the actual songs themselves, and the majority of Ash songs only function within two tempos: speedy balls out punk or cigarette lighter ready balladry. Their best songs are catchier than VD, and the production values are immaculate. In other words, just about everything you need for the top down, Saturday drive to the shore.

And who doesn’t love a great power pop song? Last summer I completely wore the plastic off of my copies of Fountains of Wayne’s Welcome Interstate Managers and the New Pornographers’ Electric Version, and now I expect to do the same with the new Ash record and coincidentally, the solo record from New Pornos leader A.C. Newman. Fans of either of the aforementioned acts would do well to add Meltdown to their summer playlist provided they have a little extra cash; their U.S. label folded last March, forcing lovers of intelligent power pop to fork over the $20+ import price (see also: The Charlatans UK).

Don’t feel too bad for Ash; they can sell out arenas in Europe. But it’s not like these guys (and gal, guitarist Charlotte Hatherly) sold too many records Stateside to begin with, having to do more with the fact that they’ve been marketed extremely poorly as opposed to not being any good. The handling of 1999’s somewhat mediocre Nu-Clear Sounds was demoralizing; then label Dreamworks shuffled the track order for American consumption and subjected about half of the songs to shiny Butch Vig remixes. Dreamworks had about as much success with Ash as they did Jonathan Fire*Eater. 2001’s stellar Free All Angels was out a full year in the UK before it hit these shores (too bad considering it could’ve saved a lot of kids from listening to The Green Album), and most of Ash’s gigs promoting it consisted of horrible opening slots for MTV mall punk bands, playing for non-existent crowds of snotty 14-year olds who wouldn’t give them the time of day.

But believe me when I tell you that there are few better ways with which to get your power pop fix than an Ash album. You won’t have to donate your organs to pay for a copy of Free All Angels, and that record contains “Shining Light” -- easily Ash’s finest tune and, in all seriousness, maybe the greatest power pop ballad ever -- one of those songs in which absolutely everything goes right. Coldplay’s Chris Martin once covered “Shining Light” as a solo piano number, and accurately prefaced it by stating, “that’s one of the best songs there is!”

If “Shining Light” set the high water mark for Ash ballads, Meltdown's first single “Orpheus” nearly does the same thing for Ash’s faster songs. A 5-car pile up of metal riffs and whiplash tempo changes accentuated by yelping and a typically excellent chorus (“Sunshine in the morning!/headin’ for the open roaaaaaaad!), “Orpheus” is a metallic power pop gem, home to more “fuck yeah!” moments than anything else I’ve heard this year. Several of Meltdown’s other songs deliver in similar fashion, in particular the title track, “Evil Eye” and “Renegade Calvacade,” but “Orpheus” is by far the mixtape nugget.

While it would be impossible to consider Ash anything other than a power pop band, they’ve made a considerable effort to beef up the metal riffage on Meltdown, going as far to rope in System Of A Down’s producer and putting a flaming phoenix on the cover of the lyric booklet (one can also assume that Tim Wheeler still plays a vintage Flying V guitar at live shows). The result often sounds a lot like the most recent Foo Fighters album: heavier than most power pop, but still far too sweet for a Slayer fan. The most notable beneficiaries of the crunchier approach would be “Clones,” which actually could pass for a Slipknot song save Tim Wheeler’s choirboy vocals, and closer “Vampire Love,” featuring amusing Anne Rice-esque lyrics and a heavily compressed riff akin to the Smashing Pumpkins’ “Bodies.” The heavier emphasis has supposedly annoyed fans who favored Ash’s early, punkier sound, but the vocals and melodic emphasis assure that Meltdown could never pass as the work of any other band.

As satisfying as many of Meltdown’s songs are, it doesn’t trump Free All Angels in the catchiness department, and like practically every other record they’ve released, takes a bit of a nose dive in its latter portions. One starts to worry that the band is running out of ideas as “Out of The Blue” and “On A Wave” seem to share an identical chorus, but the Romeo and Juliet epic “Starcrossed” is the nadir, a brazen attempt to rewrite “Shining Light” that ends up sounding far too Robbie Williams for its own good (and not even “Angels” Robbie Williams).

A few missteps aside, I feel safe in recommending Meltdown as a solid way to make good on your summer power pop jones. I would suggest that neophytes purchase Free All Angels or the earlier 1977 first, if only because they’re both better than Meltdown and widely available in the U.S., but “Orpheus” ought to be heard by as many people as possible. Barring a new U.S. record deal ASAP and a better marketing scheme, I don’t see Ash relinquishing their “woefully under-recognized” U.S. status anytime soon, a shame considering that from a pure quality standpoint, they’re entitled to as much success as the like minded Weezer and Fountains of Wayne.