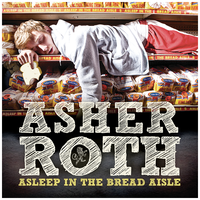 Asleep in the Bread Aisle

Before I press play on this parsing of basement-level low art, let’s get it out of our systems like so much 3 AM vomit: this fucking guy. Do we all feel better now? Probably not, I see you clutching at your side in possible appendicitis, but I’m moving on, lest I lose sight of simple wisdom that trumps the hissiest of fits I could throw: people like songs about things they do. While in a bout of wackness-induced rage, we might be as quick to dive headfirst into frat guy bloodlust as Anne Hathaway’s vagina (hypothetically), but first a sobering thought: the sun might rise again tomorrow to reveal to us less inspired anthems for purposeless inebriation. In fact: Sublime and Dave Matthews.

This is the anti-“New York State of Mind.” The beat hangs in the air like musty gym socks and Roth’s flow barely falls under the definition of rapping. It is of zero nuance; its bluntness would be dripping off its exposed frame if it had a frame. Instead it rests as a pool of expelled fluids—jammy guitars and a line about dollar pizza—reflecting its own willful stupidity and incidental stupidity in irony so thick it ceases to exist. Roth hints at a story or two, then doesn’t tell them. The hook aspires to nothing, and so its nothingness is an anthem for do-nothing/think-nothing slacker types we like to imagine were listening to the Beastie Boys and Nirvana in 1994, but were probably listening to the aforementioned Dave Matthews (the man’s an institution). One gathers Roth’s tongue spends at least some time in his cheek when he’s not using it to make gestures for oral sex. One gets the sense Roth’s kind of a goof in the least interesting sort of way. Anyone listening to this on headphones is an idiot (me), but in the context of a buzzing, genial assemblage of horny collegians, one realizes, “this is kind of my shit.”

Allow me to (cough) stare into the galaxies that compose my fingernails and muse for a moment on what this means for you, Paul Rudd, and String Theory. This stops being impishly grating around the point when the person who’s been dancing near you all night becomes approximately 11% more attractive. It starts being transcendently great when exponential functions reach one and “bro” ceases to be a suffix but rather a monosyllabic manifestation of infrangible bonds borne from flip cup victories and solid wingmanning. It’s a grower in the word’s most bastardized sense, summoning its potency from PBR, cleavage, and sweat.

I’m left to discuss solely “I Love College” because there are no other songs on Asher Roth’s seminal (second definition) debut. The tracklisting states in plain print: “∞.) I Love College,” and even if it doesn’t, I didn’t come to this Natty Lite-sponsored jam to lark on my go-kart or watch you self-actualize, Asher Roth. I came to love things. To love things I love and lovingly manifest our mutual love of things we love with the subtlety of cigarette-flavored frenching. In song form. So stuff your political insights between beer-stained cushions and focus on making painfully apparent to me these three things: I love college (ay!), and I love drinking (ay!), and I’m white (ay?).

Though what might be more important is I didn’t come to take a gigantic dump in the middle of the dance floor. As Kweli devotees sharpen their pitchforks in the basement of KRS-One’s Church of Real Hip-Hop, listening to “New World Water” and mumbling to themselves something about Michael Eric Dyson, and literate liberal arts intellectuals with, like, substance to ponder or whatever bemoan their four-minute, two-second nightmare, it becomes apparent the ugliness is overtaking itself, as grossly out of proportion as Roth’s talent-to-fame ratio. As these two factions join with insufferable haters of every social group ever to scornfully bloody “I Love College” with Medieval weaponry in some warped, masturbatory game of pompous badminton, it’s Friday night and maybe we should all be, um, trying to get laid and drinking too much? Not everyone, of course—sorry, Ted, you’re gonna have to just not fuck your wife and watch Nightline again—but Roth pretty clearly stipulates his preferred audience in the dumbest hook ever, no?

I get it. It’s lazy and foolhardy and popped collars are stupid. But if that’s the crux of this scorn, I’ve got some mediocre cake I bet you’d love to disparage for being unhealthy and a little dry. Hey, maybe you totally have it in for cake. And maybe getting blitzed in the company of people who probably really enjoy “I Love College” when it comes on isn’t your idea of a good time. I’m not convincing anyone of anything. If you’re drinking illegally, you’ve heard this come on after “Whatever You Like” and either nodded along or left to get another beer. The important part is you probably didn’t throw a temper tantrum and leave in a huff.

In what I venture might be the most gleefully idiotic song of all-time, “Turn My Swag On,” Soulja Boy is laced with an undulating sea of triumphant synths that he absolutely butchers by electing to sing in a way that single-handedly justifies autotune experiments. My ears cower in fear of his tunelessness, but my heart stammers preciously. He’s just, just so…happy. The concept of the video is basically “I live in a big fucking house with all this money! Look at this! This money! All this shit! My life is awesome!” The robustness of his sheer delight and happy-to-be-here-ness transforms a dreadful turn at crooning into a certified anthem. “I Love College” hints at this same ineffable joy. As the beat settles back into the silence it never really differentiated itself from, Roth graciously offers “You’re all invited. Bring your friends.” And, kinda: thanks, dude. Yes, I’m totally conflating the merits of “I Love College” with the merits of watching little kids run out to an ice cream truck. If participation in the whole juvenile phenomenon isn’t an option, a chuckle probably trumps a lecture.

So, we recap with the essence:

Rinse, repeat. And check your scowl at the door.