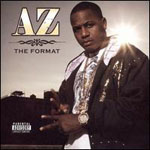 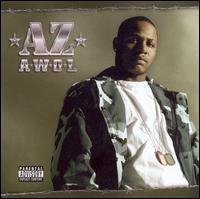 AZ was practically born on Illmatic (1994), more specifically on "Life's a Bitch" when his verse started rolling out: "Visualizin' the realism of life and actuality / Fuck who's the baddest a person's status depends on salary / And my mentality is money orientated / I'm destined to live the dream for all my peeps who never made it." It's a kind of tragic conception point, though, because AZ's stuggled ever since to live that "dream," starting strongly with 1995's Doe or Die and then shuffling on through several relatively unnoticed records on Virgin and Motown. Now he's arrived at his very own Quiet Money subsidiary on Fastlife, and he's predictably talking in interviews about taking it back to 1994, back to "Life's a Bitch," but who could blame him? Having the only guest verse on the indisputable Illmatic is one shiny-ass trophy to keep on your mantle.

AZ makes good on his promise, though; much of the music on A.W.O.L.'s not far from the soft jazz synth and sax sound of "Bitch," but unfortunately close to the weak, afterthought drums, too. It's only apt that the album begins with two cuts produced by the Heatmakerz, the modern day L.E.S. with their cheesy, charming soul and thin, bodiless hits. AZ's full, subtly cadenced spit serves as a robust counterpoint, making the songs work sonically in much the same way that "The Avenue" and "Bus Stop" worked on that Roll Deep record. With its sunny afternoon keys and vocal chop, "Never Change" plugs right into AZ's scheme of recreating his past highlight and being an agent of that time in which his skies were wide open.

AZ's turning to the retro for salvation might be most apparent on "AZ's Chillin'," which Connor Morris of Checkerboard Chimes pretty accurately points out to be a superior re-take on Audio Two's "Top Billin'" from 1987. "Magic Hour," the middle bonus song on A.W.O.L., has a great, Time Machine-worthy beat by Tone Mason and features CL Smooth. Apparently, AZ's got the right idea about this whole taking-it-back business, and he's got it even righter with "The Come Up," produced by none other than DJ Premier, a fact that's instantly recognizable as soon as the hazy string loop sets its SP-1200 boundaries and the scratches fall exactly where DJ Premier would let his scratches fall.

"You know the come up / Stack, get right, put the gun up / Laugh, get nice, split the blunt up / Pray blue and whites dont run up / Remain humble / You see the change when the Range come through / When all the fame ups your game cause your name's mumbled." Lyrically, AZ's strong as ever on A.W.O.L., so when Premier finally brings decent drums and worthy accompaniment and AZ is rhyming about being on the cusp, the desired illusion of vintage '95 materializes and blots over the interim with its label-hopping and albums like 2001's 9 Lives. If "Serious" with Nas hadn't been inexplicably cut or the Slick Rick guest spot on "Bedtime Story" hadn't disappeared, AZ would have had a couple other tricks in the bag, and the magic might have lasted long enough to fully convince his audience.

Honestly, Premier does a bit of a disservice to the album's other producers; he so clearly out-classes them despite their adequacy. Then there are the beats that outright fail, "Still Alive" some swishy, eunuch version of "Dirt Off Your Shoulder" and "New York" an ugly mess of sound effects and broody Casio breathing (not even Ghostface can help the song's rapping recover after a verse that should go on Raekwon's personal worst list). More breaks and more soul would have gone a long way in AZ's effort to put one over on the listener, to conjure up that moment that most heads fondly recall: the first listen to Illmatic. Maybe it's about time that Pete Rock and Large Professor remembered the kid who once called himself the "Visualiza."