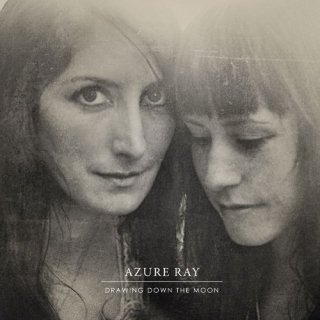 Drawing Down the Moon

After a span of seven years, seeing Azure Ray reunite was a surprise. This is partially due to the fact that even Omaha, for the most part, has moved on from the Omaha of our more formative singer-songwriter-listening years. At the beginning, with Cursive, Bright Eyes, and the other highly incestuous groups to crop up in the Saddle Creek Records label, we were drawn in at least partially by their earnest disenchantment with the stretch-of-wheat state that is Nebraska: a state that struck us as being ultimately worthy of our adolescent fervor and ennui, even more than our own suburban sprawls or what have you. Wheat is depressing! And we all just understood that. Soon enough though, the artists’ disenchantment evolved into feasible-sounding escapism: lyrics from Son, Ambulance to Bright Eyes became littered with lines about wanting to move, about joining the people who already moved to places like Chicago. Probably none of us batted an eye when Cursive’s Tim Kasher headed out for LA. When the Faint’s Todd Fink (along with his wife, Orenda Fink) punched out, did anyone blink? I did read somewhere that Conor Oberst lives with his parents in Omaha when he isn’t touring, but I’m sincerely hoping that isn’t the case (awwwwkward…).

Essentially, the Saddle Creek stable of artists, scattered to the winds, became long-distance assets, noodled around in solo or side projects, and struck out in unanticipated, overall rewarding ventures. Most importantly, they acquired new influences and band-mates. For Taylor and Fink, who have known each other since they were 15 and moved hand-in-hand through several bands and even across states—from Alabama, to Georgia, to Nebraska—the split to pursue anything else was a breakup Stevie Nicks/Lindsey Buckingham sized.

So with Azure Ray’s 2010 re-emergence, so also rises from the depths of my semi-fond nostalgia like a leviathan of lukewarm recollection all my initial “well-I-don’t-not-like-it?” sentiments. Drawing Down the Moon is a vague, delicately rendered album that is more cohesively “Azure Ray” than Azure Ray ever was before. Even writing the songs together this go-round, they have returned to form a unified stream of half-consciousness.

Despite the title, their opening track “Wake Up” is about as rousing as a warm blanket on a rainy day. With an inspiring, slow-motion harp glissando at the hands of Eliza Sydney and a warm crackle of record static, it’s got a curtains down, lights out atmosphere that quickly breaks into extremely familiar territory for a somewhat stage-y sounding breakup lullaby. Their voices slow-step in with a meek, whispered-in-your-ear closeness that hushes along into a sullen assessment of wreckage and memory. And from this first track on, there are few changes to their initial formula—they even manage to pull original producer Eric Bachmann from Taiwan to preserve their sound as such.

Go figure, it’s Bachmann’s recent foray into lo-fi, blinking synth beats that provides the album’s sparse moments of levity. The more spritely, catching songs like “Don’t Leave My Mind” and “If You Fall”—down to their bright, percussive subtleties like petite triangle dings—invoke an occasionally lighter setting for weighty, etherized vocals. Still, these moments are regretfully overwhelmed on all ends by those demure, repetitious dirges. The album, with immediacy, becomes cloistered, cosseted in the duo’s decade-old sound of self-contemplation. Which is surprising, considering both Fink and Taylor have been active musicians even while Azure Ray was put on long-term backburner status.

Occasionally, when they make room for narrative and aren’t so dead-set on inscrutable, heavy-handed navel-gazing, that pressure to feel champion the Azure Ray name is slightly lifted. “Larraine,” having established a nice balance of fragile plucks and closely-recorded vocals, makes the most of this perspective. Even while it’s a depressing-as-hell story about victimization, abandonment, and abuse, there’s a definite relief from feeling so incapacitated and fixed inside Azure Ray’s headspace.

With never any hurry or need to their lyrics or their vocals, with only dreamy soulfulness that sounds too content and comfortable wallowing in grief to want for much else—I just don’t see what’s very necessary about this album. I’m flummoxed this is the vision that has called Fink and Taylor back to the stage after over half a decade. There are new elements, sure, but the bodies they come from are locked into the same routine and the same aesthetic. Where is that Haitian influence Orenda’s been showcasing elsewhere? Where is the indication that anything has changed, as it has certainly changed in their listeners between the first time they heard “Sleep” and now?

Talking about their new album, Fink has said, “The theme ended up being about going through the fire and coming out on the other side. When you’ve been through a lot and you’re able to stand back and take a reflective look, there’s [sic] all kinds of different ways you can feel in the process.” Which sheds light on why this album, in lieu of them being so talented, is a bit of a crying shame. I think we would all have liked to hear more of the aforementioned fire, the coming out on the other side, the splits and strife of two artists who were joined at the hip for such a duration, rather than the partially satiated haze of reflection after the fact. Just because the Omaha, Nebraska we all knew no longer exists doesn’t mean we’re not old enough to be OK with that.