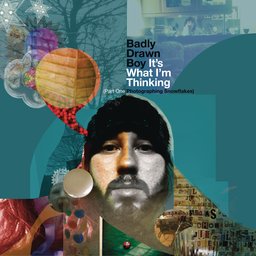 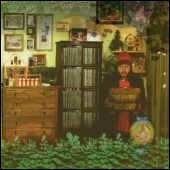 One Plus One is One

I got hit in the eye with wet concrete today. For those of you familiar with concrete, or hell, just about anything, you know that foreign objects are usually not intended for one’s eye. Concrete has the advantage of lime, which makes it particularly acidic, adding a bit of insult to injury as you desperately try and wash the burning feeling out of your eye using whatever source of water is at hand. Of course, wet concrete in the eye is just one of the many risks I’ve come to expect from my summer job working construction.

One Plus One is One is, in many ways, the music criticism of wet concrete in the eye: a pained feeling from an otherwise reasonable substance. I really liked Badly Drawn Boy once upon a time. From the lilting French horn that opened The Hour of the Bewilderbeast through the softly plucked acoustic guitar of the soundtrack for About a Boy, Damon Gough had me convinced that he was a creative, sensible, and clever singer songwriter. The reviews comparing him to Elliott Smith were rubbish, but he was still quite good. But then there was Have You Fed the Fish and you could tell from the beginning that perhaps the Boy had lost his way in the wide world of Wurlitzers and toy pianos. I didn’t entirely lose hope—his lyrics occasionally still made up for his instrumentation choices—but I didn’t come to One Plus One is One with high expectations.

Needless to say, One Plus One is One is not a return to Gough’s early form. The Boy is still intrigued by overly complex arrangements that mostly just detract from his lyrics. In a few cases this is a good thing, considering the lyrical content, but there are definitely some songs that could have benefited from less. Just less, in general. From the liner notes one is led to think of this as sort of a morose album, mostly focusing on death (that of Gough’s grandfather and of a good friend) yet the arrangements, as well as the sequencing of the songs, left me mostly just bored or, in several cases, laughing.

The album actually begins pretty well, but the awful combination of “Easy Love” and the atrocious “Summertime in Wintertime” sour the deal immediately. Gough turns the string section up to 11 on “This is That New Song,” which still comes out okay (even if M. Ward had him beat by three years—see “O’Brien/O’Brien’s Nocturne” off of End of Amnesia). “Another Devil Dies” is reasonably catchy, relying on a sappy lite-latin sort of arrangement and weird piped in applause and background noise.

The heart of the album lies with “Year of the Rat” and “Four Leaf Clover,” which says a lot about Gough. “Year of the Rat” is an absolutely huge song: we get full band, epic choruses, and, oh yeah, the children’s chorus. That’s right, the children’s choir (technically the Stockport Music Project). Sure, it’s catchy, but it’s also fluff. And it only gets worse from there. Gough actually rips off Ben Kweller’s piano vamp from “Sha Sha” on the horrific “Four Leaf Clover.” There are many artists worth pilfering from. Ben Kweller is not one of those artists. EVER.

“Fewer Words” has the benefit of brevity, but it turns out not to be the soul of wit in this case. “Logic of a Friend” plays it safe and turns out alright. The backward tape tricks of “Life Turned Upside Down” is sophomoric, and the song itself is pointless. I swear he’s trying to go for a Jeff Buckley vocal approach at several points in the song and needless to say he fails miserably. “Takes the Glory,” based around the inscription on Gough’s grandfather’s tombstone, works pretty well, but is immediately overshadowed by the true behemoth of the album, “Holy Grail.” Clocking in at upwards of eight minutes the album’s proper closing track starts off as a rather restrained tune, but Gough can’t resist throwing in all the elements he has used throughout the album (really, all of them), including the triumphant return of the children’s choir. I actually really liked this song for about two minutes, but then it just sort of gets bad. And then awful. And then I turn the CD player off.

I have the distinct feeling I’ve heard most of the songs on this album before. Nothing here is particularly original, and nothing moves me in the way that Gough’s earlier work so did. It’s always a disappointment when you get that concrete in eye, and One Plus One is One is no exception.