1. Those Are Cobras, Man 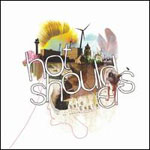 If it weren't for Future of the Left's Curses, I might be tempted to call Bald Eagle's Hot Shoulders this year's Mcluskyist record. Thankfully, Future of the Left help remind me that Mclusky's rock was fueled by their wit whereas Bald Eagle's rock is fueled by their, well, need to rock. They just happen to pile all their killer hooks and dirty riffs around morbid words that are treated as romps. You can hear "Those Are Cobras, Man" blink and grin as it warns: "Those are cobras, man / those are cobras / Bite your fucking hand / those are cobras." As Dave Goldstein points out, how can you not dig a band that'll title a song "Sharks Are Fucked Up"? The lyrics describe a watery death scene that might be grim if not for that title and for the band's guitarists Mikey Wheeler and Danny Matteson exuberantly playing off each other, pushing towards frenzy. And if the title calls to mind "The Shark's Own Private Fuck," the angular efficacy of the dual guitar attack recalls earlier Sunny Day Real Estate, just with a big fondness for '70s rock. Or, to be entirely more accurate, this is the best Hello Sir! record not on Hello Sir!

Bald Eagle are loud plus smart plus a lot of fun. "Lemon Lime Be On Time" feels like its lyrical double-dutch image notated as visceral post-punk; the guitars are twin ropes, the drums and bass the rapid pat of those ropes hitting the pavement, complete with switch-ups in tempo and rhythm -- and there's even handclaps in the breakdown. "Trans Dyn-O-Myte" might be the best sexually confused ode to a transvestite since "Lola"; Justin McCrady's drums carry the track, guitar lines like quotation marks starting then stopping mid-measure, encasing each ragged yell of "Your face like a foot" and "Your hands on your hips" and "Tits and a dick" and "I AM A MAN." The guitars become more sinewy, weaving in long strips through the track as they're joined by Justin Nardy's juicy bass. Love is professed with the same scratchy-throat force, the album title dropped before the song unravels into a distended coda. So where "Lola" was bright for how it wormed its way into the pop canon, "Trans Dyn-O-Myte" takes its joy in collapsing somewhere far outside of that, ecstatic and exhausted by its loss of inhibition. "We. Have. You. Did." is a right fist-pumper, but it's difficult to explain how Bald Eagle can chew over lines like "If our god is true / then we are surely doomed" with such glee. So just listen to the thing.

You could call the instrumentals filler, but they're very well executed filler that give the album a couple reprieves from jamming, that have some compositional ties to each other, and in "What's All This Brew-Ha-Ha" bring the album to a post-rock peak that's a satisfying amendment to its rock-rock constitution. The closest thing to a misstep is the still musically nice "Rodents of Unusual Size," which uses Bald Eagle's curt phrasing to recap the story of, yeah, The Princess Bride. Inconceivable? I guess not.

Really, though, there isn't much surprising about Hot Shoulders beyond just how damn good it is, delivering in all the ways a record of its ilk should. It pummels and dances, barks and laughs, a fighter in a cage who wouldn't want to be anywhere else. Its movement would seem erratic if it weren't so clear that everything's motivated towards achieving a knock-out blow. For an upstart label Emergency Umbrella has made some good choices and has lovingly delivered the releases of the Foundry Field Recordings and now Bald Eagle, both bands far from revolutionary yet serving as excellent examples of their given genres. In Bald Eagle's case we have a record that's my third favorite rock album of the year (behind Curses and Rainbow by Boris with Michio Kurihara). Lips and fingers curled, Hot Shoulders is lean muscle that bounds about its stage with a strong awareness of its place, its history, and what it wants to do. Shit's a blast.