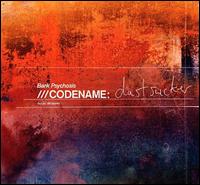 Bark Psychosis released Hex back in 1994 and earned a devoted cult of fans. Some critics wagged the finger and accused the album of sounding like a second-rate tribute to the seminal Talk Talk albums Spirit of Eden (1988) and Laughing Stock (1991). The influence can’t be denied; why, Talk Talk drummer Lee Harris contributes some of his deft percussion to Codename: Dustsucker. However, even with its chill mood and variety of instrumentation, the new Bark Psychosis album doesn’t sound all that much like Talk Talk.

Bark Psychosis fill up space with more sonic clutter than the stark, chessboard walls of a Talk Talk construct, the song dynamics don’t feel as determined and persistent, and the dense, pretty drone of manipulated sounds and Graham Sutton’s vocals seem to owe more to Neil Halstead than Mark Hollis. Codename: Dustsucker will have listeners smiling as they reach for their copies of Slowdive’s Souvlaki (1993).

A harsh synthetic key toots a horn of announcement, and then a low electric strum ushers in still-dripping nymphs tip-toeing light cymbal splashes on the carpet of “From What Is Said to When It’s Read.” Swooning vocals melt in and out of a chiming guitar line, and lazy layers of production and distortion idle up on top of each other. It takes place at a rate sedate enough to bore the grandparents, but it’s too entrancing to be completely ignored or slept upon.

The Bark Psychosis hypnosis act continues on “The Black Meat” as Sutton murmurs about black-sanded shores of strange lands, and the tide comes in with a bluesy keyboard melody, a rising then descending guitar and a steady foam of cymbals until the European porn sax takes over at about the three minute mark. “Miss Abuse” and “400 Winters” do nothing particularly wrong in following up their predecessors besides coming off as lax heirs to the established music methodology at work. As it nears its middle, the album threatens to drift off into the ill-defined nether regions of softcore post-rock--if not for passages like the elastic electronic warble that accompanies the last two and a half minutes of “Miss Abuse.”

The building clang minute of “Dr. Innocuous/Ketamoid” resets the album, and the rejuvenated Dustsucker finds immediacy in a sly countdown to the mild roman candle sparkles of “Burning the City,” a track that only waxes in brilliance when squiggling effects and muted feedback wails add color to the display. Again, the album quickly loses Bark’s breadcrumb trail of songwriting with the meandering eight minutes of “Inqb8tr” but recaptures the plot in stunning fashion with “Shapeshifting,” the album’s climax. Twee vocals, an acoustic strum and a lilting organ do a half-hearted job of putting a genial face on the sinister machinations of the track’s low end. The drums pick up the pace, and amps hum to life; as the song approaches the three minute mark, a guitar solo crashes through the ceiling like Heaven’s unwanted, its Eastern-tinged flames of squealing noise incinerating every natural element it touches. Closer “Rose” is a fine track in its own right, but in the aftermath of “Shapeshifting,” it’s but the mellow denouement.

When Bark Psychosis assent to the avant-rock demons that tear at the corners of their pleasant, lush music, they transcend all Talk Talk and shoegazer comparisons to create something truly unique and arresting. God only knows how long the wait may be for the next Bark Psychosis album, but the selfish listener might hope the coming years to be a discomforting decade for Graham Sutton and company.