1. Voice Of The Other
2. Lotus Cloud
3. The Stones Speak Through The Fire
4. The White Mountain Filled With Light
5. Road To Bardo
6. The Last Parade
7. Mouths Of Light
8. Teonanacatl 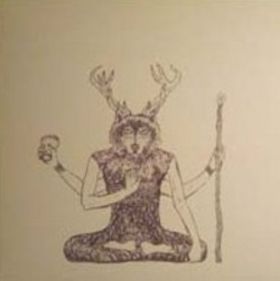 From Our Mouths a Perpetual Light

In a semi-recent review posted on his Heritage Head web site, rock icon/author/critic Julian Cope envisioned the latest work by San Francisco duo Barn Owl as a kind of time traveller’s palantir, a sort of seer’s stone for gazing into America’s colonial past. He notes, “It’s as though the first layer of American settlers has been reactivated through the music and Barn Owl are transmitters.” As overzealous as his piece gets, Cope nears an important specificity in his description. The songs on From Our Mouths a Perpetual Light do evoke the foreboding ecstasy of discovery, the brooding anxiety of reaching into a new frontier. However, the rich psychic wilderness that they probe isn’t from the past, but from our very own time.

With this first non CD-R, formal LP, John Porras, Evan Caminiti and drummer Mike Bailey have created a purposeful, expansive drone music to soundtrack the forgotten dimensions of our postmodern consciousness. Using heavily effected guitars, ebbing harmonium and sparse percussion, the trio spins out eight compositions that slow time to a veritable halt, stopping our hyper-accelerated reality dead in its tracks. Almost fully instrumental and unbreaking in its mournful demeanor, the album goes a step further than much experimental music that aims to shake people from staid mindsets or inspire with challenging sonic abrasion. Instead, it locates buried outposts of meditative consciousness, delivering the listener into realms of time and space frequently ignored.

A significant part of what makes this record such a marked departure from other currents of contemporary music is its use of stark aural minimalism. The album was recorded analog on an old reel-to-reel and is devoid of ornamentation. Barn Owl uses the basic tools of rock and roll (and a slew of worthy effects pedals) to illuminate a world just beneath our plane of immediate perception, perhaps most poignantly illustrated by the short, enthralling vistas of “The Stones Speak Through the Fire.” In the echoed cries we hear a wilderness churning in isolation. This could be the soundtrack to a ritual being performed somewhere in expansive pristine America, but is more likely the distant sound of smelting ore, of free land being transformed into the cold dominion of man.

Songs like “Road to Bardo” and “Lotus Cloud” achieve similar graphic results, conjuring sonic portraits of the brooding spiritual undertones of life in the twenty-first century. Repeating melodies and ebbing snares manifest vibrant, pulsing energies that resemble inspired thoughts or unfulfilled desires lost in the structures of industrial civilization. These entities burn bright momentarily but fade into the entropy as singular expressions, gone as quickly as they came. The record’s standout, though, is the ominous elegy “The Last Parade.” A dystopian blues that is more felt and well articulated than many of its kind (e.g: Silver Mount Zion, Evangelista), the song reaches into a great unspeakable emptiness that we tiptoe around daily. Its deliberate pace illuminates like a blacklight our urban anomy and ingrained apathy into a pyre of glowing city neon.

Despite the rarity of its depth and the sheer accuracy of its sentiment, Barn Owl’s music isn’t unprecedented. In the ’60s, the Grateful Dead employed drone’s hypnotic repetition during their more experimental phases while the Velvet Underground explored its dissonant possibilities, while further from the radar was the subversive work of visionary artists like LaMonte Young and Tony Conrad. Today, Wolf Eyes and Sun O))) use drones similar to Barn Owl’s, signifying the death and destruction wrought by western civilisation with heavy white noise and amplified, low tone feed back that feels, at times to register seismographically. Some might label this as garden variety stoner rock, but it transcends those genre misgivings. Barn Owl’s ultimate value lies within the subtlety of their approach, reminiscent almost of Indian classical music.

Further along in his gushing article, Cope writes, “This Barn Owl is as ancient as the Gods themselves, as vital as the heroes who ape them and bait them.” Initially I thought he was delirious with enthusiasm, but I get it now. At the end of the day, making music as profound as this in North America is an act of cultural production that shouldn’t go unrecognised by music culture at large. Unfortunately, as a measured statement of subversive creativity, drone music might reach critical mass in subculture, but it wasn’t built to to thrive in our pop world.