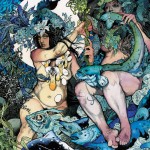 Flexible tastes have characterized this decade. The absence of absolute pop consensus is concurrent with a spate of thriving subcultures, and thanks to ubiquitous and user friendly technology, the broad-minded and discerning consumer can now gorge on a wide variety of low-hanging fruit. This isn’t a novel observation, but it seems to hold the most verisimilitude, as the public now comes across decade lists that include The Meadowlands (2003), Hell Hath No Fury (2006), and Mastodon’s Leviathan (2004). Certainly, boundaries are softening, but metal’s crossover into elements of indie-rock’s core audience seems a bit surprising. The latter was shaped, in part, as a reaction against the former in the eighties and nineties. Intensely physical, tightly arranged, and demanding a high degree of skill, metal rubs the discursive, insular nature of indie the wrong way.

But something happened during the last ten years. The brightest stars of the indie rock gene pool—Modest Mouse, Sleater-Kinney, Cat Power, Wilco, hell even Belle and Sebastian and Bonnie “Prince” Billy—became more streamlined, professional, and muscular. Acts whose stage shows used to be seat-of-their-pants train wrecks turned into amazing machines. The result is that that indie-rock today, for better and worse, has little relation to the mishmash it was in 2000; by contrast, metal has trended less chauvinistic. A bumper crop of brainy, self-aware bands like Mastodon, Isis, Sunn O))), and Boris either became active or enjoyed their most important years. Influenced as much by the Melvins as Metallica, their records included (or were entirely made up of) long, experimental passages and slow tempos, largely abandoning the violence and machismo of their genetic parents while retaining the riffs and musical excellence. The result was that those acts became less threatening; in fact, between Mastodon referencing Melville and Isis namedropping Foucault, however inchoate these gestures may have been, they became actively attractive.

In this environment, a band like Baroness makes sense. They’re a metal band whose sound owes a lot to indie, specifically the sub-genre of post hardcore. Vocalist and guitarist John Dyer Baizley in particular has a gruff, plaintive bark that directly recalls Fugazi’s Ian MacKaye, circa Repeater (1991). The music bares its influences, as well: Baizley and new guitarist Peter Adams employ a series of moving octaves in “The Sweetest Curse” that gives its final moments a shimmering sense of movement—a trick in the post-hardcore/early emo-core bag since its inception. “Swollen and Halo” uses a dense, modal guitar line that’s so chain-effected it sounds lifted from late At the Drive-in. “A Horse Called Golgotha” relies on a descending series of bar chords at a pace with Fugazi’s “Break” or “Styrofoam.” And I know of no other metal record that boasts a song as soaring and melodic as “The Gnashing.” (Think Texas is the Reason does U2; it sounds like the kind of thing which would sound more at home on a Deep Elm comp than one from, say, Southern Lord).

Even without overt references, the band retains a post-hardcore sensibility. The two guitarists can wail, and do all over Blue Record, but they prefer to do so together, abjuring any virtuosic, extended soloing. That self-abnegation extend to the band’s rhythm section as well. Drummer Alan Bickle and bassist Summer Welch are both capable and nimble—one listen to the drummer’s introduction of “War, Wisdom and Rhyme” proves that—but they’re seldom flashy. The band is at its best when they sit in the pocket, digging craters and grooves in the pavement. “Golgotha” is their best moment, where they give the song a lunging bounce while the guitarists pile harmonies and riffs high on top the other. But it’s all in a day’s work: they make “Jake Leg” a series of ululating explosions, giving the tune its aggressive, wavy menace only hinted at by its refracted middle-eastern flavored riff. The 6/8 “Sweetest Curse” feels almost lazy in its pace, but the tension it creates under the Sabbath-esque riffs is effective.

Blue Record is, in sound and spirit, satisfying metal painted with broad strokes and big gestures. Baizley and Adams may have left the shredding at home, but nearly every track here is loaded with their dueling, harmonized leads, ripped from the vintage Iron Maiden playbook—and they can pull out some inspired, soulful soloing, owing more to sixties garage rock than the fingers of Kirk Hammet. “Swollen and Halo” is the second part of a suite beginning with “Steel that Sleeps the Eye,” a hushed acoustic guitar that’s only missing wind effects. An instrumental theme bookends both sides of the album (for someone named “Bullhead,” perhaps inspired by the Melvins album of the same name; the same melody appears at the album’s midpoint as an ode to the nearby Ogeechee river) which can best be described as a mash up of Metallica’s “Orion” and the intro of “Fight Fire with Fire.” The low C string rings and gloriously thuds under palm muting in every song. Even the less obviously heavy material builds into fiery eruptions that are best listened experience headphones on and the volume (and fists) all the way up.

Baroness are often compared to their regional counterparts in Mastodon, and while the influence is undeniable (particularly Bickle’s ability to flip the down and up beats within the same meter), the most similar sounding act I know is Chicago’s Pelican, a band who does with post-rock what Baroness does with post-hardcore. Cross-pollination is nothing new in the rock world, of course, and it would be foolish to credit blogs, or something, with the achievement the band has made on Blue Record. Still, perhaps the band is analogous to our modern day music consumer: taking the best elements from unlikely sources, Baroness’s music has grown larger and, perhaps, turned into something they could call their own.