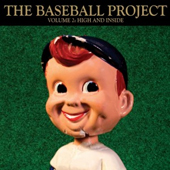 The Baseball Project: Volume II: High and Inside 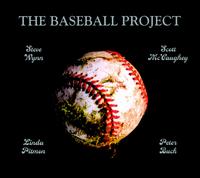 The world of indie rock n’ roll does not lack for baseball fans. Stephen Malkmus has been known to fret over his fantasy baseball team just as much as the arrangements on any Jicks album, and the softball team comprised of Matador staffers is reportedly formidable. The Silver Jews’ David Berman admitted in these pages that he cares deeply about America’s Pastime. Yo La Tengo? Huge Mets fans, their name alone an arcane reference to an early Mets inside joke. (More on that here.) But aside from a clever lyric mentioning Mets one-season wonder Butch Huskey on YLT’s 11-year old “Moby Octopad,” none of the aforementioned artists has produced anything resembling a “baseball song.” In fact, “Take Me Out to the Ballgame” excepted, the only obvious baseball song either I, or any of my friends, could readily think of was John Fogerty’s “Centerfield.” [But…Tom Cochrane & Red Rider’s bittersweet summer anthem, “Big League,” c’mon! -Ed.] On the flipside of things, did you know that senior ESPN baseball pundit and Red Sox super fan Peter Gammons recorded a WTF covers album with a bunch of Boston area musicians two years ago? His take on the Clash’s “Death or Glory” is…well, it’s not embarrassing.

Headed up by the songwriting of unofficial R.E.M. utility man Scott McCaughey (also: Young Fresh Fellows, Minus Five) and Steve Wynn (Dream Syndicate, Miracle Three), the Baseball Project is one of those “why the hell hasn’t anybody thought of this before?” ideas that is carried out exceedingly well. Filled out by R.E.M.’s Peter Buck on various bass/guitar duties and Wynn’s wife Linda Pitmon on drums, the Baseball Project comes off sounding like the Travelling Wilburys parading through Cooperstown, completely engrossed in their subject matter, and warmer than the local tavern after a beer league softball game.

Opening track “Past Time” immediately sets the overriding tone with a big-hearted E Major shuffle in which McCaughey and Wynn harmonize over a laundry list of what makes the Great American Pastime just that: notably, “DiMaggio, Shoeless Joe, Minnie Minoso, Yo La Tengo,” and “the sideburns of Pepitone and Oscar Gamble’s afro.” It’s probably the catchiest song I’ve heard this summer, deserving of a permanent spot on every big field PA, and capable of evoking a blue sky afternoon at Wrigley Field. While “Past Time” opts for an all encompassing series of facts, most of Volume 1‘s songs fixate on an individual player, and the album’s extensive liner notes leave no question that McCaughey and Wynn are plenty educated in their hardball lore. They sympathize with Mark McGwire (“Broken Man”), draft a first person narrative in which Sandy Koufax ponders his forced early retirement at the age of 30 (“Long Before My Time”), and, even if it is sung entirely in Spanish, the mere mention of “Chavez Ravine” should alert one that the “Fernando” in question is Fernando Valenzuela, one of the greatest (and most beloved) Los Angeles Dodgers pitchers of the early ’80s, and now their Spanish radio broadcaster.

Other topics touched upon include the advent of free agency (“Gratitude”), and the persona of The Closer—the oft loved, oft reviled, relief pitcher whose sole job is to (hopefully) slam the door in the 9th inning. Yet two of Volume 1‘s strongest tracks are the ones in which Scott McCaughey writes from personal experience. “Sometimes I Dream of Willie Mays” is a classic father/son narrative about McCaughey riding with his dad down to Candlestick Park to see the San Francisco Giant legend. Even better is “The Yankee Flipper,” a tribute to ’90s fireball pitcher (Black) Jack McDowell, one of the handful of ball players who not only has musical taste that expands beyond Top 40 and “Enter Sandman,” but rocks a mean Rickenbacker in his own band, the Replacements-inspired Stickfigure. Apparently, McCaughey is a personal friend, who, along with R.E.M.’s Mike Mills, feels partially at fault for the fateful day in 1995 where Blackjack flipped off all of Yankee Stadium; “He loved R.E.M. and he played a Rickenbacker guitar / But for a night out on the town with Mike Mills you get hit pretty hard.” Nuff said.

But suppose you’re the type of hipster who disdains all sports, but still loves Murmur (1983)? Is it possible to simply enjoy the Baseball Project as a jangly garage-pop album removed from its subject matter? Kinda, as they do indeed traffic in the same type of ringing jangle that Peter Buck made his name on. (Hell, “Long Before My Time” even swipes the chord progression from “Supernatural Superserious.”) But it’s evident that these guys placed just as much, if not more, focus on the lyrics as the musical accompaniment, and the vocals are placed high enough in the mix that it really does help to have an interest in the subject matter beforehand. Or at the very least a willingness to learn, because aside from writing a kick ass rock album, McCaughey and Wynn aim to educate the masses. Repeated listens to Volume 1 have had this critic scurrying to BaseballReference.com to check career stat lines, and so long as you skip over “Ted Fucking Williams,” this record even makes for ace kiddie music, ideal for family car rides to the ballpark, sure to make junior ask questions.

Oh, and lastly: assuming a second volume is (hopefully!) in the works, may I request a Keith Hernandez song? Endless possibilities.