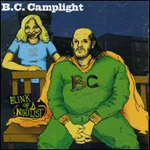 Blink of a Nihilist

B.C. Camplight's wants to do the "perfect pop record." It's right there, curt and quotable, all hickeyed up on the press release for his sophomore effort, the cute but not-so-cute Blink of a Nihilist. Hype or no hype, it lays one thing in plain sight: if nothing else, Blink of a Nihilist is the latest exponent of a wigged-out Disney-pop apocalypse that everybody seems to like to some extent or other, but nobody seems to take too seriously because, well, there's songs about werewolves and then there's songs about werewolves.

The songs here seem to fall firmly into the former camp. Sure, the record's own "Werewolf Waltz" muscle-mouths the Flaming Lips to grotesque weirdness, but though the piece is handsomely set out, it feels more than a little too immaculately conceived: the chord changes too contrived, the sci-fi gongs relegated to party trick gallivanting. It's not pop as bona fide communal experience, but pop as spectator sport, bright and at times brilliant, but unerringly de-humanised. Granted, the album's explicitly in and of itself, entirely insular, but it's an insularity that feels somehow tapered, blunted to mete out pillow punches rather than the melodic gutter shots that BC mainman Brian Christinzio seems intermittently capable of. Take the album's strongest track, "The Hip and the Homeless," where Christinzio laments that "I'll give you a piece of my mind." The backing here, the whistle, the harmonica never intrude on the heart-rending core melody, which is cleverly down-played, allowing the loopy chord changes to linger rather than lout it up. The song is perhaps the most exceptionally executed of all B.C. Camplight's oeuvre and follows through on the promise of last year's Hide, Run Away, toning down that record's cloying excesses to hit on a subtler, more affecting slice of pop pourri.

Which is not to devalue the merits of the rest of the record, full of prickly melodies and balls-out deviance. It's just that those same melodies and that same sense of sclerotic concept is undercut by being so exhaustively evoked, so up front and glamorised. "Suffer for Two" hosts whole families of extraneous, borderline annoying synth lines that seem to function to no other purpose than to ram up the oddball quotient. But song after song of being hit by the weird mallet doesn't so much affirm the record's outlandish eccentricities as it exposes their clinical formula.

Christinzio has a clear penchant for harmony, but at this stage lacks the pedigree of a Nilsson or even a younger Wainwright, the ability to realise when less can be more. His songs are brimful of gusto, doing away with ambiance or even nuance for almost comic blasts of euphoria, but the delirious fragments aren't patched together so well, album-wise or even within single songs, into satisfying cohesion. It leaves Blink of a Nihilist into a suitably strange position. It's by no means a resounding popular success, or a songwriting home-run, or a brilliant but flawed exposition of an exciting new talent. No, most of the better parts of the record aren't so much exciting as they are tirelessly well-worked, chiselled to delight, to snap, crackle and to pop. But moments of true ingenuity do creep through proving that, whilst Blink is an enjoyable if not particularly striking listen, it does enough to keep us hoping that B.C. Camplight can one day build on its demented potential.