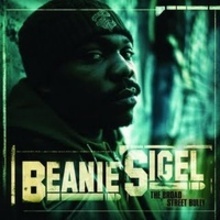 Here are a couple things the dipshits currently writing about The B. Coming have either missed or gotten wrong:

1) It is not the hip-hop Time Out of Mind. Yeah, opener “Feel it in the Air” rocks a mournful sax wail on the choruses, but the contemplative, midnight-rumination verses reflect not steely-eyed pessimism but a resigned sense of hope: “I’m still afloat / I ain’t the captain of the yacht but I’m on the boat.” Perhaps not opening with a single, club banger or Neptunes track colors the album through a melancholy lens, but don’t put on The B. Coming expecting death; an infectious sense of music’s redemptive powers pervades the entire album. This isn’t the diary of a man falling apart, it’s the last vestige of happiness in an otherwise bleak life.

2) The guest rappers are as central to the album’s appeal as Beanie himself. This may seem like a slam, but it’s not. Beanie’s flow and cadence are as straightforward as they come; the rhymes hit on the second and fourth beats with scant variation from couplets and ABAB schemes. And even though the first line of the album is “My spider sense is tingling,” this isn’t some Dumille-esque exploration of the outskirts the genre. Lyrical and verbal dexterity aren’t necessary, though, when Beanie’s shouting out Larry David and dropping obvious-but-infallible chestnuts like, “I still pray a lot, forgive me for my actions / Cuz I spit gangsta, think Muslim and act Catholic”.

This will only take an album so far, though, and that’s where the guests come in. Freeway and Young Chris ewpick up “I Can’t Go On This Way” right after Beans drops that line about prayer and finish the race strong, wheezing and wailing and growling and bragging and baring their souls in contrast to Beans’ reconciled headnodding. Beanie’s phenomenal mic reliability provides the bedrock upon which Jay-Z, Redman and a jaw-dropping Bun B (among others) drop glistering lyrical gold. Beanie ups the ante and provides a high watermark for quality; the guests use this setting to glow brighter and hit harder than they do on their own albums.

3) It’s not okay to sample Bon Jovi. Not even as a joke, not even as an echo in the background, not ever. That an album this strong would close with a guitar line written by Richie fucking Sambora is an Eminem-caliber production mistake, especially when the song upon which it has drunkenly upchucked looks to have once shared the same spark as the fourteen tracks preceding it. Hip-hop community, take heed: no Bon Jovi sample shall go unchecked in these halls.

4) That horrific misstep excluded, the production is the best to hit the above-ground hip-hop megascene since Hov bowed out. With album highlight “Bread & Butter,” Just Blaze further emerges as a producer with Timbaland’s inventiveness and the Neptunes’ consistency; amidst stuttering strings, Grand Puba, Sadat X and Beanie lament what Quasimoto dubbed MHBs, and the chorus blooms in a searing samba-soul singalong before collapsing back to the chiming, thumping verse beat. Chad Hamilton gives leadoff single “Gotta Have It” an insistent, ass-shaking thump; it’s thrilling enough as is, but Hamilton piles on handclaps, bongos and a strobing buzz upon which Twista just goes batshit: this is what he was made for. And try to suppress a cold chill when through the old soul fog of “Change” the spectre of Lauryn Hill rises, and pop music gasps a collective “Where you been, L. Boogie?!” “Flatline” comes with more charging menace than the entirety of The Massacre, and, well, I guess it’s really saying something when the Neptunes and Snoop (whose partnership is fast becoming the model for a late career resuscitation) provide one of the least interesting tracks on the album.

5) At no point does any track on this album resemble the Talking Heads. At all.

But while folks are having a hard time writing about The B. Coming, even a dunderheaded jackass that doesn’t know Edan from Evol can agree that:

1) This album is the hot shit.

That’s hottttt with five t’s, hot like my car stereo, hot like Claudia Cardinale in Once Upon a Time in the West, hot like pretty much no major label rap LP since Hov laid his infinitely classy Blueprint. And while The B. Coming may not reach that album’s searing heights, who gives a shit? “I’m the CEO,” Mr. Sigel declares on “Look At Me Now”; that track’s title is an irresistible command, and somewhere, Kanye’s shitting his pants.