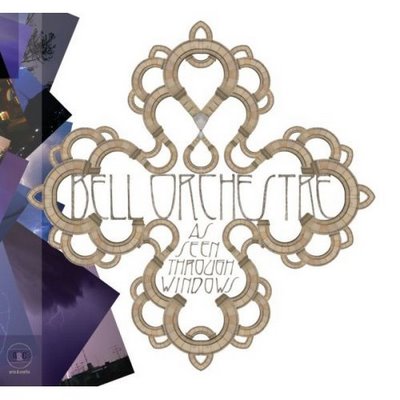 As Seen Through Windows

I’ve pinpointed the moments during which the surface-staid chamber rock band Bell Orchestre set themselves apart: the “Recording a Tunnel” triptych from debut Recording a Tape the Colour of the Light (2005). A French horn echoed a three-note progression off of tunnel walls while the occasional car Doppler-ed by. The songs, despite (or because of) their simplicity were an infusion of anti-cynicism, of wonder filtered light-like through the concrete everyday. It was atmospheric stuff, with an aural effect difficult to capture in the antiseptic studio, and it literally placed the music. This makes more sense if you’ve ever spent time in Montreal’s thriving artistic community, where to see a couple of kids recording French horn in a tunnel is no thing. They’ve probably got a grant from the Canadian government to do it.

With similarly practical aplomb the Orchestre often take to wandering the floor when performing a church in Ottawa, arcing tones into the upper reaches of its main hall. Though neo-classical music of this type is often relegated to the impersonal confines of canonical instrumental music, they succeeded in sounding immediate, local, and relevant by stretching out their legs and placing those same sounds in the cathedral of city infrastructure. There’s also “Recording a Tape… (Typewriter Duet)” from that same album—which, like Victor Bermon’s still incredible Arriving at Night (2007), simultaneously skews tactility and harnesses it, having the cake of exploding the romantic and eating it too. This is the stuff of bands that test their formulas without the intent of stretching them far enough to break so that they can indicate with self-satisfaction our silly conventions. One gets the sense that this earnest exploration is undertaken with some degree of doe-eyed fascination, a musicianship that revels in the surprise of the unexpected result. For that, Recording a Tape wasn’t just accomplished, it possessed that elusive quality missing from so much independent chamber music: charm.

Is this lowered expectations? I mean, Godspeed were treated like they existed on the forefront of something just because they dared to have an opinion. So it’s with some trepidation that I first concluded that As Seen Through Windows was more of an “album” album; less the chaotic assemblage of sounds unable to be unaffected by their surroundings, more a controlled experiment with a clear hypothesis. It sounds more coherent than episodic, placeless, and with a definite emphasis on the rock aspects that, on Recording a Tape, were used sparingly. I thought it said something, and something negative, that a recording of their live staple cover of Aphex Twin’s “Bucephalus Bouncing Ball” is here treated as the album’s centerpiece. I found myself wondering if Windows was the sound of a band that I had thought was just getting started already running out of ideas. I heard the band perform this material live long before hearing the album and couldn’t help but notice all of the unsurprising builds and easy crescendos. I was resigned to the notion that Bell Orchestre were stepping, perhaps unknowingly, into the realm of the dumbly cinematic, all frantic gestures and obvious indications, rather than the atmospheric that had drawn me magnetically to them in the first place.

While it’s true that the subtlety of their debut is here a thing of clarity rather than nebulous echoes, and that a song with mariachi tendencies like “The Gaze” would have seemed horribly out of place on Recording a Tape, there is still evidence of the band’s affection for the fragile. “Water / Light / Shifts” is as composed and natural as slivers of light across water, and the lovely “Dark Lights” and “Air Lines / Land Lines” remind that Bell Orchestre are music school alumni plucking away at their talents with seemingly effortless self-possession. The site of exploration may have been relocated to the genre-specific rather than the contextual. The atmospheric to which I seem to be endlessly referring isn’t disappeared, but folded into an expanded plot. Ultimately it’s opener “Stripes” that reminds the listener of the textural possibilities for instrumental music in a studio setting. It saws away with light distortion and drumstick taps in what is the album’s most straightforward idea. At first it seems a strange opener with some of the album’s least ambitious ideas, especially given the grandiose perfection of follower “Elephants,” but the song is as much a declaration of intent as any song here other than “Bucephalus Bouncing Ball.”

That cover predictably turns out to be the most contentious thing here. It’s unquestionably well performed, turning Richard D. James’ playfully inhuman precision into something tangibly organic, but is still performed with breakneck enthusiasm and consummate ability. It’s long stood as the band’s go-to counterargument that they were simply pitching variations on sonorous noises into atmospheric spaces. But the song is an attention stealer for a band with ideas of its own, better thought of as a bracing surprise for those watching live. Here the song overshadows. It provides a Lego-tight peak, as if the band passes the torch at the album’s climax. It’s hard to take exception to the song itself, but it’s also difficult to deny its status as a curiosity. A song that one wants to hear because one can’t imagine it being performed with live instrumentation will not sustain to the same degree as something similarly varied but entirely owned by the band like “Air Lines / Land Lines.”

The notion that the band has turned so readily to the studio-polished, tom-heavy and heedlessly panoramic is not in and of itself a misstep; Windows is masterfully performed, economical chamber rock from a band that we all knew had it in them. But I also feel as if they’ve already reached pre-established limits of dipping-surging dynamics and rigidly enforced majesty. In 2009, which sees ambient music seemingly re-inventing itself on a monthly basis, I wonder if Bell Orchestre’s next steps truly must be the gambit of an overturned genre already turned up to nigh hysterical soundtracking. Perhaps instead they’ll marshal a return to those local, tactile places, the romance of the invigorated homestead, where what we see through car windows is a band performing in a tunnel in the dead of night.