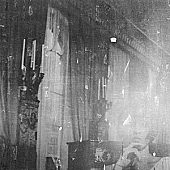 No matter how I try to process it, I find Belong’s second album to be an unexpected and not entirely welcome change in direction. The New Orleans-based drone duo’s previous releases—debut album October Language (2006), and EPs Colorloss Record and Same Places (2008)—dealt in stripped-down drones that blurred together while radiating a unique heat, their melodies and textures presented ever so slightly out of focus as if lost in a deep, humid haze. Though Colorloss was a collection of covers that featured vocals, the songs still felt utterly fragmented—like sixties psychedelia transformed and reduced into almost unrecognizable building blocks, more sonic wreckage than assembled material.

This is not the same sound that drives Common Era. This is obvious within a few seconds of opening track “Come See,” where a propulsive drum machine takes hold and largely refuses to loose its grip over the course of the next nine songs. Once again, there are vocals. Though the lyrics are almost entirely unintelligible, the vocals are immediately melodic and carry the feel of pop singing, providing what are essentially concrete structures. In short, Belong’s sonic identity is now that of a shoegaze band, and given their jump from the more pop-oriented Carpark to the more drone and ambient-friendly Kranky, this is a bold move.

Despite this jump, however, these songs will likely get called pop music by jilted drone enthusiasts only. Belong presents them so vaguely, and with their vocals mixed so low, that it’s almost impossible to dissect them as anything but smears of melancholy. “Never Came Close,” for example, has a deeply sad-sounding chorus hidden at its center, but only the change in the vocal melody and the slight shift in instrumentation communicates this fact. The motorik backbeat driving “Perfect Life” and its Peter Hook-indebted bass line throb throughout the entire song, but noise swallows it whole before it delivers any conventional payoff.

The band pulls off its new approach best on “Keep Still,” which is incidentally also the song that most closely resembles the band’s earlier work. Its drum machines get pushed further back into the mix, making room for expansive, echoing vocal melodies to compete with the processed guitar and synth work, and it makes a world of difference. The open space helps to reveal the song’s density, ultimately yielding something not unlike one of Bradford Cox’s warped fifties pop exercises upon repeated listens.

And that’s the central issue here: if there’s a major problem with this material, it’s that it’s probably too easy to compare Turk Dietrich and Michael Jones’ new work not just to shoegaze giants past but also to Deerhunter. While that band recently left Kranky for 4AD, four years ago they broke out with the willfully difficult Cryptograms, an album that revealed pop songs only for its most dedicated listeners before the band itself went on to become a pretty good guitar group. On Common Era Belong sounds in transition; Dietrich and Jones are somewhere between their debut’s relative lack of structure and fairly conventional noise-pop without committing wholly to either. The garbled radio transmission production deprives the music of immediacy while the drums and vocals aggressively call attention to themselves, a unique yet sometimes deeply frustrating sound.

Common Era is by no means bad. However, when compared to what a monumental achievement October Language was, and in light of the half-decade wait, it’s hard not to be disappointed. These new songs feel like part of a different continuum, and specifically part of a continuum that was in many ways killed developmentally by the release of My Bloody Valentine’s Loveless twenty years ago despite the many good guitar bands that emerged since. By focusing on discreet songs, the band’s remarkable attention to detail—the ways melodies swelled, fragmented, interweaved, broke apart, went supernova—is less obvious. No matter how good these songs are (and many of them are quite good), the finished product is underwhelming, and I can only hope that I don’t have to wait another half-decade to hear where they go next.