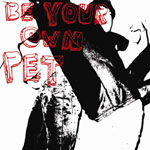 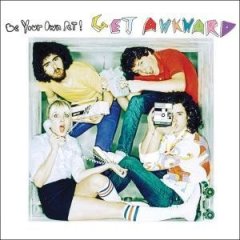 It’s really hard to be fun. I mean proper fun. You can fake happy, content, and even love to a certain extent. But fun? That’s a different thing. And I’m not talking “going out for a few beers and having a laugh” fun. I mean proper jumping around like a three-year-old on too much sugar fun. So, how do Be Your Own Pet get it so right on the nuclear candy punk of their second album Get Awkward?

It could be a pop-culture thing. In “Becky” you get the sneery swagger from years of watching bitch-baiting high school comedies. Playful schoolyard lines like “I heard you talked a lot of shit about me / To your new best friend,” and “Give me back all the clothes you borrowed / Don’t give me bullshit, bring them to school tomorrow,” could be taken verbatim from Mean Girls, Heathers, or Bring It On, except they’re to the tune of “The Locomotion” and Jemima Pearl ends up in juvie for knifing Becky after class. “The Kelly Affair” retells the story of the small band breaking in the Valley and the associated perils of popping pills and fucking strangers to a surf-movie chorus and double handclaps. Then again, loads of bands use pop-culture references without it seeming so day-glo and playful.

Maybe it’s a lineage thing. Jemima Pearl’s screamy-sung hysterics whipped to frenzy by Jonas Stein’s barbed wire guitars recall the glory days of Riot Grrl on the opener “Super Soaked.” I loved Riot Grrl—bands like the Voodoo Queens and their reed-organ garage rock; Huggy Bear, who released the best Riot Grrl song ever with “Her Jazz” (cold hard fact and not worth debating btw); Yummy Fur and Mambo Taxi. Excellent. But that’s just me projecting my past on to them and, besides, they’re too young to remember Riot Grrl the first time round. It’s not like they are the Yeah Yeah Yeahs or the Noisettes.

Or it could be that they are just not brats? I mean, bands like the equally young Hadouken are just obnoxious. They seem to think that they are reinventing music. It’s neither here nor there that they sound like Pop Will Eat Itself. And that we hated Pop Will Eat Itself. Or that Hadouken confuse energy and inventiveness with volume and intricacy so all their songs sound like greasy, lumpen turds. You know the shits you have when you’ve had loads of really rich, heavy meals for a prolonged period? Like over Christmas? Those are like Hadouken’s songs. Greasy post-Christmas turds. Anyway, moving on, it’s their obnoxiousness which is the most jarring characteristic. Be Your Own Pet are the complete opposite.

Be Your Own Pet just don’t sound like they are trying that hard. Admittedly, the rough edges have been smoothed down from their amateurish debut. Plus, nearly every song contains a chorus or riff that sticks like a perfectly executed loogie. Songs like “Heart Throb” and “Black Hole” pogo with a poppier new wave twitch recalling the Rezillos or early Blondie at their most irascible. By tightening the playing and trimming the fat their no-bullshit verse-chorus-verse-chorus delivery makes their songs instantly accessible. On “You’re A Waste,” which stop-starts with trademark lunacy, Jemima even sings. Proper singing. They even roll out the harmonies to offset any harsh dynamics on “What’s Your Damage?” and “Creepy Crawl.”

It also does them no harm that they are just plain funny. They usurp “Love Sucks’”s anti-cutesey statement in “Zombie Graveyard Party!” with the line “Love is lame let me eat your brains” (it’s good to know Vampira did not die in vain) and you can’t help but shout along with the whole canteen chanting, “It sucks to be the janitor!” on “Food Fight!”

This means that even though Get Awkward starts at a frenetic pace and pretty much keeps slapping you about the face for the next half hour—there’s hardly a song that goes above 2-minutes-30—it doesn’t feel like an assault. And even if it did, it would feel like being mugged by the Muppets. It’s almost as if, rather that challenging you to love them like Andy Kauffman, they’ve taken the approach of Carrot Top. If you don’t like the song you’re on, don’t worry, there’ll be another one along in a minute. They really want you to like them but they’re not making it into a chore. And that’s the last thing you what you want when you’re having fun. FOOD FIIIIIIGHT!