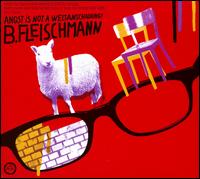 Angst is Not a Weltanschuung!

Discussing Daniel Johnston’s mighty song about King Kong feels pointless. It only makes sense when you listen to it, and that seems about right since the story itself can only be told either through Johnston’s shaky warble or as an expensive cinema epic. “They thought he was a monster / but he was the king / but he was the king / but he was the king,” he pleads with no accompaniment; it captures Kong’s pathos in a way Peter Jackson couldn’t, even with full command of his faculties and $200 million. It’s miraculous; it may be even more so in B. Fleischmann’s hands. Placing Johnston’s primal and Panasonic recording in a bed of drum machines and keys may seem an odd decision; after all, King Kong” is vaguely modal, and untethered to any semblance of meter, strict or loose. But Fleischmann just lets him go over major keys and drum beats, and the result is “Phones, Machines and King Kong.” Johnston’s voice floats in and out of time, as if it were a dream, somehow heightening the sense of Kong’s loss while cushioning the singer’s own mental instability. The result is too satisfying—in ways emotional and intellectual—to believe the song is a mashup, taken from Fleischmann’s older “Phones and Machines.” Here it sounds totally of a piece, the sort of mental furniture that makes up dreams, or perhaps the ingredients of a good day: good music, good work, and maybe a good cry.

Then again, Fleischmann’s been doing this for a while; a student and master of drums throughout the nineties, he’s been making music since 2000’s Choir of Empty Beds. Even his record company isn’t sure if the hilariously titled Angst is Not a Weltanschauung! (exclamation point duly, and deliciously, noted) is his fourth album or seventh. The rest of the record reflects the expertise shown on “King Kong”; excellent skitter-drum patterns propel warm synth pads and ringing guitars on nearly every track, especially instrumentals like “When Last We Met at a T&TT Concert,” which stakes a happy middle ground between Ambient Works-era Aphex Twin and recent New Order. One can be forgiven for substituting all of that with “sounds like the Postal Service,” and to be honest single “24.12” boasts a male-female duet that bears an uncomfortable resemblance to that noxious song with Jenny Lewis. But the song’s libretto feels more like a Wong Kar-Wai movie, as Sweet William Van Ghost remembers a Christmas eve four years ago, borrowing ice from a melancholy, comely, and attached neighbor. (Only, who needs to borrow ice on Christmas eve? The mind can only project: someone mixing drinks alone, perhaps?) Except vocalist Mariles Jagisch is in better spirits. “The asshole is gone,” she cries; he’s dead, in fact, and she’s quite content to spend the holiday watching movies by herself. The blunt nature of Fleischmann’s lyrics (“now just leave me alone”) doesn’t offset the tale’s strangeness, or its poignancy.

Fleischmann’s plainspoken lyricism occasionally trips him up, like on the guitar-driven “Still See You Smile” (the story’s all in that one, but in case one were holding out hope: “Sometimes I wish I were a dolphin / because diving would be easy”). More often, he’s pretty successful: “Even Your Glasses Miss Your Eyes,” the album’s elegiac closer, has several highly personal and specific references to a dead friend: “So who is going to take care of your sheep / and who is now stroking your cheek? / And even your glasses miss your eyes.” This song explains the album’s otherwise goofy album art, and perhaps it’s that image that makes even this naked display of emotion so much more touching, and still full of good humor. This could also explain his attraction to Johnston, and their very sympathetic coupling: both artists use humor (intentional and otherwise) to provoke profound emotions, even if one is a professional rank amateur and one a total pro. Johnston never really grew up; but then again, we’re always told it’s children who have the deepest insight into the nature of adult interactions. Fleischmann navigates a very grown-up world made of heartbreak and death, and yet can only make sense of it in simplest terms: the same way most of us don’t understand the fall of King Kong until a children’s story reminds us that beauty killed the beast.