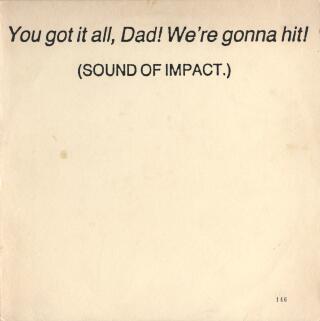 I like noise. I like big-ass vicious noise that makes my head spin. I wanna feel it whipping through me like a fucking jolt. We’re so dilapidated and crushed by our pathetic existence we need it like a fix.

So goes the manifesto of Steve Albini, as inscribed in one of his ‘80s fanzine entries. His band, Big Black, was his big-ass vicious noise delivery system; they ruled the ‘80s US post-punk underground, releasing seminal records, pissing off everyone, and horrifying crowds both at home and abroad. Albini was an incredibly active and savvy guy. Besides being the brains behind the three-headed beast of Big Black, he also ran a label, built a studio and recorded bands on a budget. Back on the 4th of July, cokemachineglow compiled a list of Steve-Albini-produced albums. Included among them were Songs About Fucking (1987), by Big Black, and Shellac’s 1000 Hurts (2000), a later Albini incarnation.

One omission from the list was a little-known Big Black “bootleg” called Sound of Impact (1987). Featuring select songs from shows in Muncie, Minneapolis, and elsewhere during their 1986 heyday, this live, high-quality, vinyl-only document is shrouded in controversy. The story, evidently, goes something like this: With the band’s consent, Sound of Impact was released in England in an edition of 1000 under a fictitious label called Walls Have Ears, and then, after that initial pressing sold out, re-released in a quantity of 500 by UK-based outfit Blast First. Everything was copacetic until Blast First re-released it in one final edition of 500, this time without Albini’s consent. He immediately pulled the plug on any further deals with the label, and the rest, as they say, is late-80s post-punk vinyl history. In short, thanks to all the bad blood, you can’t get the damn thing anymore—unless, of course, you want to fork it out for one of the 2000 (presumably) existing copies.

All geeky, nit-picky, boring-record-collector fact-grubbing aside, it’s easy to see why this particular slab repeatedly flew off the shelves. It’s by far the most successful musical distillation of Big Black’s modus operandi, an exercise in pure annihilation, and a deafening exorcism more cathartic than a year of shock-therapy. A spin through Sound of Impact presents the band firing on all cylinders. On Songs About Fucking and Atomizer (1986), the band almost hides behind their thick wall of sound. But Sound of Impact breathes; there is space for the acoustics to surround and engulf the listener, which allows for a more engaging dive into Big Black’s world of derangement. As it goes with similar-minded ‘80s indie-weirdo brethren Butthole Surfers and Black Flag, the studio recordings, while still pretty excellent, were merely accoutrements complementing the concert experience.

Some people swear off live records, and often understandably so. Sound quality is one issue, but plenty of bands just can’t make it work on a stage. Not the case with Big Black. They had a drum machine, and it granted them absolute rhythmic precision. Sound of Impact is heavy and skillful and accurate; it manages to single-handedly prove just what an in-the-flesh attack squad these three sick-headed guys were. As such, it’s the ultimate conversion experience for the Big Black neophyte. Forget the full-lengths; you can always pick those up later. This is a comprehensive set crammed with the most efficient versions of the band’s classic songs (if we can call them that). From the evil kickoff, “Readymen,” to the crunchy romp through rarity “Rema Rema” that closes out the set, Sound of Impact is a monster that slices with surgical precision. You can’t ignore it. It reaches out from a deep, dank core inside your stereo speakers, grabs your attention, and proceeds to mechanically hemorrhage its way through your central nervous system and your better sensibilities. The guitars wrench and pulsate and scream; Albini and Santiago Durango take turns slashing through the muck. Colorful weirdness and shimmering feedback creep out from the throbbing bed of noise put down by bassist Dave Reilly. The music, set to a machine-gun tattoo, alternates from a seasick lilt to a pummeling death march. It all somehow toes the line between murky and crystal-clear.

And this, to be blunt, is why the band was good. They successfully translated their twisted, juvenile glee, their fascination with fear and shock, into live punk rock as evocative, musical art. Everyone’s huge hang-up about Big Black, positive or negative, is Albini’s lyrics, which are plainly audible on studio versions of their songs. Albini has frequently stated that the band had vocals only out of necessity and to provide rhythmic accompaniment, and they’re downplayed in the live setting. The notable exception is the right-on-the-money take on “Jordan, Minnesota,” which communicates Albini’s mocking indulgence in feigned clichés of angst and a fearless unwillingness to take things seriously. In all other cases, the “singing” is for the most part presented as secondary, granting the truly bizarre music total sonic precedence. In fact, perhaps the most entertaining vocal deliveries here are Albini’s between-song ad-libbing, his anthropological commentary, dick jokes and crowd-baiting. Beyond that, the band’s renowned misanthropy and pitch-black humor are on full display, all the way down to the back cover of the album—it offers the viewer a series of twelve transcribed exchanges between air-traffic controllers and pilots during the final moments before plane wrecks.

Ironically enough, it’s this live soundboard recording—and not the in-studio work for which Albini is revered—that offers us the best audio document of the man’s own band. Therein lies the paradox. He could never squeeze this record’s dizzy heights and loose, psychotic energy out of Big Black while in front of the studio boards. It’s generally accepted as fact that Albini has never been interested in “producing” records; rather, “engineering” is his preferred term. Other recording luminaries like Butch Vig (who did Nirvana’s Nevermind [1991] and a laundry list of albums by ‘90s also-rans) and Bob Ezrin (the brains behind numerous classic ‘70s rock records) sculpted tonal masterworks through tricks such as adding 25 guitars to every track, phasing the drums, or running parts backwards. It’s record production as art.

Albini is more concerned with the actual documentation of what a band sounds like. Just like early American blues field-recording champion Alan Lomax, Albini records groups, his own bands included, in order to create a historical document—the art’s either there or it isn’t. Being the good, objective journalist he is, he accurately and faithfully puts the bands in his studio on tape. But it just so happens that Sound of Impact finds Big Black’s stars perfectly in alignment in the live setting. The energy permeates: it’s easy to tell the band was having a blast, the audience was engaged, and the acoustics were perfect. It works, because the band knew how to harness the immediacy of a live show and deliver the scary noise in a compelling fashion. Sound of Impact is the definitive Albini field recording: a trio of unrepentant goons out of the studio and terrorizing society, an ugly band set loose in the ugly Midwest, and one hell of a fucking record.