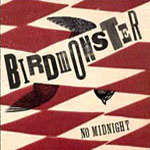 Like many others, ’d suspect, I first came across Birdmonster whilst trawling through Gorilla Vs. Bear; “Resurrection Song,” featured on their 2004 EP, drew favourable comparisons to Lonesome Crowded West-era Modest Mouse with its shrapnel bursts of guitar and harshly intoned vocals. I wasn’t that impressed; maybe three years ago I would have taken more notice, but following the utter, and almost disheartening, deluge of axe pilfering meatheads dealing out jitterbug rhythms to "eccentric" melodies, I was understandably bored.

Sure, nobody’s saying Jeremiah Green’s thunderous snare hit at the two and a half minute mark on “It’s All Nice on Ice, All Right” isn’t exciting as fuck, but the Mouse had skewed their egotistical sublime into objective sound scapes and Byrne worthy hit singles. Nobody wants a bunch of unimaginative twerps glutting on the leftover offal of rancid guts that exploded years ago. I’ve heard my unfair share of bad bands (We Are Scientists?!!), but in the last year it seemed people had started making good on Brock’s foundations, rather than ghost writing the paperback edition to an autographed hardback. Wolf Parade tossed in a dynamite stick of a record, and Tapes 'n Tapes relied on pungent song writing to enliven a genre, whose characteristic morbidity threatened to circle on, and devour, itself.

All Birdmonster need is a bass line. Undulating wildly but still propelling the song’s plethora of infectious hooks, unfazed, like a coat of arms into beleaguered surroundings, “Cause You Can” bubbles with giddy positivity and enthusiasm; the song may linearly progress through verse-
chorus-verse, but, like pre-Rubber Soul Beatles, it flaunts its melody at every opportunity, the band bustling forth as if ripped clear out of the pages of a dusty monochrome textbook and into a Technicolor novel. I think it was Springsteen who spoke of how the opening of Dylan’s “Like a Rolling Stone” was akin to somebody kicking a door open to your mind, and, whilst “Cause you Can” is by no means destined to be cemented in the epochs of time, it works under the influence of the same electrical storm.

Besides, just a cursory listen to the highpoints of No Midnight makes it abundantly clear how Birdmonster are a band constantly wriggling out of people’s naïve conception of how certain songs should begin and end. To put it simply, there’s enough evidence hear to dub them a “band of ideas,” and in today’s obfuscated vomit-inducing, equilibrated negative feedback, I can think of few higher honours. The prairie twang of the title track mutates into a double-speed, kaleidoscopic thirty seconds of manic Britpop, whilst “Skeleton Suit”, where vocalist Peter Arcuni cleverly intones “Oh, we’re proving a point!” blasts off in graveyard melancholy before appropriating, of all things, the Ramones (!). Arcuni’s vocals on this album must be singled out in particular, having evolved leaps and bounds from the simple-minded squawk heard on the EP. Having shaved off some of the grizzle on his voice, he’s hit a magnetic drawl, alternately melodious, ramshackle and cocksure. It doesn’t so much sing these songs, as hustle them--the rollicking, fun-engendering “Spaceman” wouldn’t be the same without the assorted “Oohs” and “Ohs,” invested with the laid back passion of Britt Daniels.

All this is high praise, indeed, and, don’t get me wrong, when Birdmonster burst the dam to let that reservoir of innervations snowball out of control, then they slay like the best of them. The group of wonderful songs on this record, however, are surrounded with subpar imitations, and sometimes aimless, open ended dirges. “Of Mice” lacks an interesting melody and “The Bar in the Back of the Basement's” locked in a self-defeating attempt to play the lead to Pixies’ “Weird at my School” better than Joey Santiago. Fact is, that there are a few too many ‘Ehh’- and ‘Yawn’ eliciting songs to warrant No Midnight’s inclusion on any "Best Of" list.

What No Midnight is, certainly, is a highly enjoyable debut, possibly the best kind of debut – not too self-immolating (think Funeral) or career-ending, which succeeds in divorcing Birdmonster from the runts of the pack. Let’s hope they deliver on all that promise.