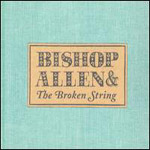 Whoa. Bro, you’re going to want to hear this. What a way to start the year: the indie pop do-it-themselvers in Bishop Allen have announced that they’ll be self-releasing an EP every month until 2007. At four tracks per disc, that means 48 tunes in a mere 12 months, which is some straight-up Ryan Adams shit, though the dude only released 41 songs in album format last year, believe it or not. But hey, forget yer new year’s resolutions and check this thing out. I’ve already given up on going to the gym.

“Corazon” is as good as mid-tempo indie rock gets these days, building from chord to chord as singer Justin Rice’s strong-but-smart inflections lead to the chorus. The band holds back, though, staying restrained until the guitar break’s minor fireworks. The rest of the disc muddles along similarly -- “The Bullet & Big D” is just vox and acoustic guitar through its first minute, but then the band enters and takes things straight to three-chord emphatics. The track ruminates on the good old days, all “remember when’s” and “now I’m doing such-and-such,” but Rice’s wordplay is clever and his voice engaging. There are shades of Billy Joel all over this little record, but unlike Mr. Uptown Girl (try wading through that discography), these guys don’t need an editor. At least not after four songs. Lemme know what you think, broseph.

Thanks for the nice letter. Honestly, at first I thought it was a joke: I mean, an EP a month? What kind of concept is that? Then I put it on, and the sun came out, I grew an inch taller, and had a little extra bounce in my step. This is brighten-your-day good. I knew I should’ve trusted you, man, even with a thinly disguised comparison to your personal demigod, Ryan Adams. So yeah, I searched out more, and I’m hooked on this Gregorian (calendar) indie-pop like Punxsutawney is hooked on groundhog.

I’ll do the Pennsylvania Polka any day to songs like “The News From Your Bed,” which embodies the way that I take on the brutal assault that is an Iowa February: smiling through the pain. The song is about a depressed girl who talks to a mouse named Mr. Whiskers, but the piano-driven jangle-pop that backs the tale is a reminder that the sun will come out tomorrow. “Queen of the Rummage Sale” feels a little bit rummaged itself (is the singing a bit off-key?), but the stitching tightens up for the repetition of “hey!” in the bridge and the sheer celebration of the last verse: “We’ll call up all our friends / I think we’ll do fine.” Then they inexplicably slam on the breaks, choosing to close with an arresting and beautiful outro that leads nicely into “Central Booking.” It’s more than a slapdash collection of tracks, ya know? This is quality work.

Craig, dogg, glad you dug February. I didn’t get this from the newspaper, but here’s a headline: UCLA makes NCAA finals; unmercifully slaughtered like Muhammed Ali at the “Drama in the Bahamas.” Bishop Allen delivers slam dunk #3, though, turning up the volume and kicking out the fuzz box jams on “The History of Excuses.” “Suddenly” is closer to the band’s strum-happy comfort zone, but “The Monitor” is this disc’s real stand-out. Carried by a ever-present bass, electric guitars soften and spread out like warm spaghetti as Rice sings “They just carried it on! Carried it on! Carried it on!” with an intensity worthy of the Weakerthans’ John K. Samson. At this point, the handclap section after the second and third choruses is just a bonus. Meanwhile, it’s the second half of the big game and the crowd at Pauley Pavilion…well, the crowd is no longer at Pauley Pavilion. Good thing the Bishop isn’t playing SXSW this year -- if I wasn’t taking finals this week, I probably wouldn’t get out of bed.

Sorry to hear about your Bruins, but here in Iowa we had some, um, legitimate devastation. Try this (real) headline on for size: Tornado Rips Through Iowa City. Everybody in town was safe, no worries, but property damage is still a bitch, and luckily I made it through unscathed. Allegedly March goes in like a lion and out like a lamb, but April is bringing it. As for the Bishop, well, at this point you know how the Bishop rolls: strong.

Actually, “blustery” might be more accurate, as this is probably the weakest of the bunch to date. Opener “Flight 180” contends for the best track so far, and carries the subpar “Shrinking Violet” and “Costume Ball.” After using some weird Christmas tree imagery, the song jumps to a plane ride and subsequently takes off in a slow ascent toward near-perfection. Toy pianos, a string section, underlying guitar noise, cue the symbols, “And if you feel like dancing / dance with me.” Did I hear you say Mile High Club?

P.S. I handled your earlier Ryan comment as it relates to sheer output, but did you just compare these guys to the Weakerthans? You are in love, my good man, which must mean that spring has officially sprung.

And a happy Bishop Allen birthday to me. Sounds like they got me a present: A very special lady (Darbie Nowatka, who has one of those adorably modest voices) sings on “Butterfly Nets,” a cutesy acoustic number complete with a humble sax solo. It’s impressive because it doesn’t try to be. Maybe it’s spring fever settling in, but this is the loveliest and simplest of the group’s EPs so far. Even “A Tiny Fold,” the token indie rocker, is more Belle & Sebastian-with-electric-guitars than overblown (or just blowin’ it) Death Cab for Cutie. In other words, it’s not too loud to throw on the morning after turning 21. What’s haps with you?

What’s up is my new 5th floor walk-up. Just moved to Brooklyn this month, which at this point felt like a goddamn pilgrimage: the home of Bishop Allen. I haven’t figured out where they live yet, but I take some pleasure knowing that we’re sharing an island. Hell, they are probably working on the fall season as I write this. June’s EP is the perfect subway soundtrack, all electronic urban lust, wonder, and discontent. “Black Suburbans” is a government paranoia tale that sounds seriously scared, carried along by a persistent drum beat, campfire harmonica, and a hint of lap steel. “The Same Fire” just burns, if you will, a song about breaking hearts and then doing it all over again. I’m sweating in my sheets, but that could have something to do with the heat wave. So, what’s next?