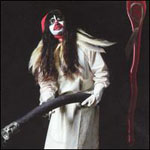 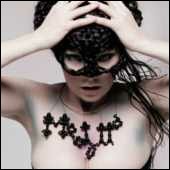 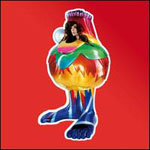 This is Björk’s very own Eraser (2006), a big costly overwrought okay album. As with any Björk record the goal here is reinvention. Indie Madonna? Maybe not, but every release is intended as the heralded emergence of a dazzling, fully-formed new aesthetic. The problem is that unlike Post (1995) or Medulla (2004), very little in this soundset truly “dazzles,” and unlike Homogenic (1997) or Vespertine (2001), the ideas refuse to congeal into an album-length sonic narrative. Whereas previous Björk records swirled disparate instruments and production techniques together and left the reader with a predetermined set of adjectives and moods to bask in — embryonic, swooning, Rahzellian—_Volta_’s aesthetic is broken down much easier. To wit:

1. There are a lot of horns on this record.

2. Beneath those horns lies flashy percussion.

3. There is also Björk’s voice.

And, really, that’s about it. There’s nothing inherently flawed with these elements, and the album’s ultimate disappointment isn’t based in any fault of brass instruments, big electronic percussion, or Björk’s voice. Indeed, in a few instances, these scant elements swirl around the ghostly bones of monstrous, lovely songs: the sinewy bloom of “Vertebrae by Vertebrae,” the pulsing regalia of “Wanderlust,” the meditative Mark Bell mix of “I See Who You Are.” But even among these obvious highlights, “Vertebrae” fails in its second half to make anything of the ungodly tension in the first, “Wanderlust” sounds like a good Homogenic throwback, and the last is an apocryphal remix.

Mostly, then, Volta‘s three core elements add up to nothing, are handfuls of sound that melt on impact. Lacking the largesse of Homogenic or care of Vespertine, the aesthetic sets itself up for failure. Such spare arrangements put great stress on each of the three elements to overperform, but nowhere on Volta do all three elements function in unison. One is always picking up the slack, either busy drums fixing tired vocals (“Innocence”) or doubled-up vocal hysterics as thick mascara over bland, homely music (“My Juvenile”). The drums on “Hope” sound tacked on exclusively to resuscitate the listener after the deadening “Pneumonia,” although the chimes tinkling on these bummed drums from above are even less inspired. So here all pressure falls on Björk’s vocal performance to make the song, you know, worth listening to, but a couple moments of burst emphasis fail to bring the limp piece to attention. The Volta aesthetic, at its very best, would just be enjoyable; as is, it fails to shock, cohere, or impress. It bores.

This leaves the informed listener with some big-time guest-shots to bemusedly scan through, and, yes, like much of the rest of this humorless record, these disappoint. The sucker-punching Timbaland Futuresex (2006) b-side “Innocence” is the best of the three. It’s less irritating or interesting than “Earth Intruders,” but it’s a welcome surprise after the 25-minute Antony duet “Dull Flame of Desire,” a monumentally tiresome dirge through limpdick brass and cyclical Ayn Rand imagery that actually has the balls to suck hard enough to rip through every level of cultural logic to sound like fucking “Stairway to Heaven.” If I can just personally interject, I mean, how the fuck does that get through every stage of the process, past record execs and Matthew Barney and Brandon Stosuy and everyone else, still sitting there sounding like “Stairway to Heaven”?

It’s both baffling and boring, and it kills the album sitting in the crucial track three spot, but “Declare Independence” might be a more garish eyesore sitting at the end of the tracklist. Lightning Bolt drums are chopped and restructured into a technopunk anthem—Björk could’ve sang anything over this martial slam dance and had the best Rob Zombie track since “Dragula.” Instead she took the opportunity to squeal a sequence of vaguely revolutionary credos, second-personing her way from “well-meaning empathy” right into “disgusting Bono self-importance.” The track is a sort of antiestablishment Idol Gives Back, a perfect storm of insulated good intentions and fucking idiocy. When Björk yells for the thirteenth time, “Damn colonists! . Don’t let them do that to you!”, one can practically hear Iraqi corpses moaning in response, “Thanks, Björk! Hadn’t thought of it that way!” It’s the worst type of “protest” song: vague, condescending, blindly furious.

An album of pasty songs, severe missteps and bizarre overreaches, but an album nevertheless shimmering occasionally with the inherent sometime-genius of its creator, Volta is one of those pretty-bad records that may stick around, may sound better in a few years. But it still won’t be good, and it certainly won’t be near any of its predecessors. It will continue to have the unmistakable scent of failure that only comes when scorched by high expectations. It will be brought up knowledgeably but dismissed quickly in conversation. It will be listened to as a reminder: yes, it was not good. This is “minor” Björk.