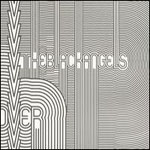 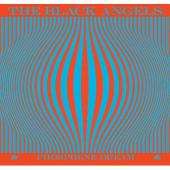 A phosphene is loosely defined as an optic phenomenon whereby one sees light without light actually entering the eye (thank you, Wikipedia); think of what happens after a powerful sneeze, the rubbing of a closed eye, or, to some, the taking of LSD. Based upon their choice of groovy cover art, I’m thinking the latter is what the Austin, Texas-based Black Angels had in mind when titling their third album. Whereas their CMG-approved debut Passover (2006) portrayed the Angels as rhythmically pounding doom-mongers constantly trailed by hellhounds, Phosphene Dream finds them fully embracing a more traditional “psych-rock” tag by infusing their bad juju with heavy doses of ’60s Haight-Ashbury.

The specter of Jefferson Airplane looms particularly large here, as does that of fellow evil Texans 13th Floor Elevators. It’s hardly a coincidence that the Black Angels have served as Roky Erickson’s backing band on a few occasions, and to further solidify the comparison, they even break out the electric jug on the garage-rock shimmy of “Sunday Afternoon” (“With your new eye / Turn on your life / Let your love bloom / Leave your ego”). Of course, this is still the same band who devoted a quarter of their first album to nightmarish Vietnam scenarios, so the focus is more “bad trip” than peace and love. To this end, the Doors-y “River of Blood” easily lives up to the heaviness implied by its title, and the band’s obsession with military sharp-shooters continues—“The Sniper” being the second time in three albums the Angels have named a song after the same. The scream-punctuated title track is the highlight, a pea-soup thick drone in which heavily treated guitars buzz like an insect that’s lodged itself into your ear canal, literally causing your skull to vibrate while Alex Maas’s nasal drone becomes indistinguishable from the fuzz around him.

While there’s nothing here quite as epic as Passover‘s “The First Vietnamese War,” Phosphene Dream benefits from being relatively streamlined compared to prior Black Angels albums. It’s an economical ten tracks in forty minutes, and the songs are easier to tell apart than usual, also playing up a newfound British Invasion steez in addition to their trademark lysergic drone. By showing a willingness to diversify their sound while cutting down on bloat, Phosphene Dream is easily the Black Angels most listenable record to date. It also suggests that they’re keen on that most outmoded of concepts in the blog era: career longevity.